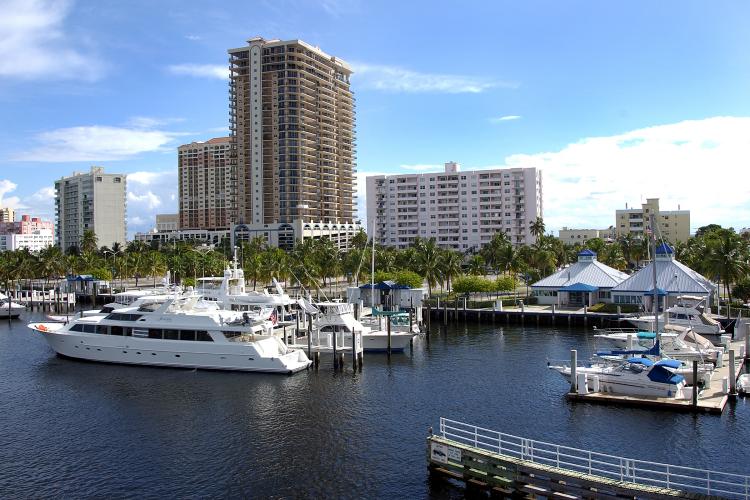 It’s not just the nightlife scene that’s hot in downtown Fort Lauderdale, FL. The office market has really started to simmer with a vacancy rate that fell by 5.7 percent between 2012 and 2013. Businesses are moving in, attracted by the increasing number of young professionals who’ve settled into downtown apartments and condos. The ratio of jobs to residents in the downtown area is nearly equal, a sign that people want to live where they work. Along with new faces and new entertainment options, Fort Lauderdale residents have seen their incomes grow. The transformation from suburban beach town to more of an urban center was planned in 2003 by city leaders and further refined by a master plan update in 2007. The primary focus was to create what community leaders referred to as a “livable downtown.”

The meandering New River and an intricate canal system give Fort Lauderdale a Venice-like feel. Downtown high-rises offer expansive views of the Atlantic Ocean, intracoastal waterway and saltwater lakes. Both tourists and locals head to Himmarshee Village for shopping, live entertainment and locally owned restaurants and pubs. Many patrons of the nearby Broward Center for the Performing Arts stop here to extend their evenings. More than 40,000 Fort Lauderdale residents live on yachts docked at the more than 100 marinas and boatyards, many of which are connected to downtown by sidewalks and bike paths covered by a canopy of trees. Families flock to the Riverwalk area in downtown, which includes a park and cultural amenities like the Bonnet House Museum and Gardens along with the Nova Southeastern University Museum of Art.

Connecting downtown with A1A and the Atlantic Ocean is Las Olas Boulevard, which offers 17 blocks of sidewalk cafes, art galleries, fine dining and sizzling nightlife. City leaders used Las Olas Boulevard, with its green plantings, wide sidewalks and colorful architecture, as a model for how the rest of downtown Fort Lauderdale should look.