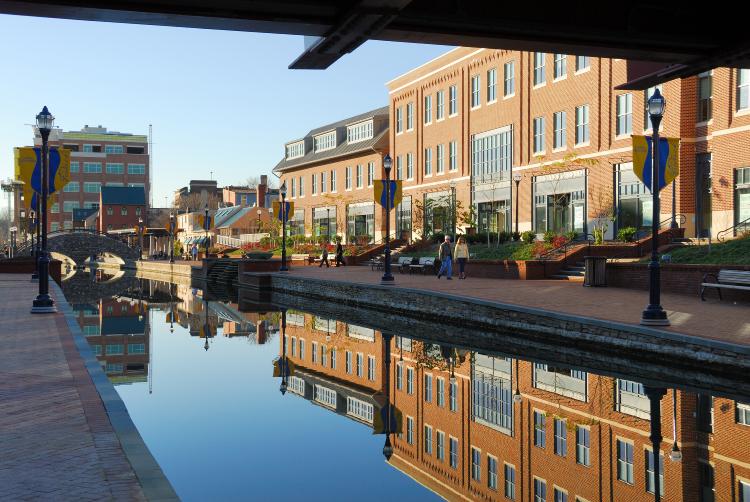 The orange glow of a setting sun enhances the romantic appeal of Carroll Creek Park in downtown Frederick, MD. Curved bridges extend over the water, and street lights bathe red brick pathways in warm light. It’s one of many settings in this historic and artistic haven that residents and visitors find alluring. Tall church steeples rise above 18th-century buildings that house martini bars, boutique shops and art galleries.

Downtown Frederick emerged from economic decline during the late 1960s and survived a devastating flood in 1976. But perhaps it’s greatest comeback stems from recent revitalization efforts that helped turn the downtown area into a magnet for East Coast artists.

Residents have seen steady income growth, falling unemployment and a high occupancy rate that continues to spark development of residential and commercial projects. In 2003, the state designated downtown Frederick an Arts & Entertainment District, which allows artists and craftsmen to sell their work tax free. This lured many artists to the area, and residents and service-oriented businesses followed. More than 2,500 historic properties in the downtown area have been renovated for modern use while preserving Colonial-era architectural elements. Beyond more than a dozen antique shops are food markets, bookstores, bottle shops and wellness centers, all within walking distance of residences.

Those living in and around downtown Frederick use recreational facilities like Diggs Pool, which has water features for young children, and Baker Park, offering tennis courts, athletic fields, playgrounds and a small lake. An incredibly dog-friendly city, many shops and even some restaurants allow dogs, while Dog Park gives canines a place to run around. Locals crowd into cafes and small music venues to hear up-and-coming musicians, while the Weinberg Center for the Arts features shows by many well-known performers, movies and sing-alongs with a Wurlitzer organ.