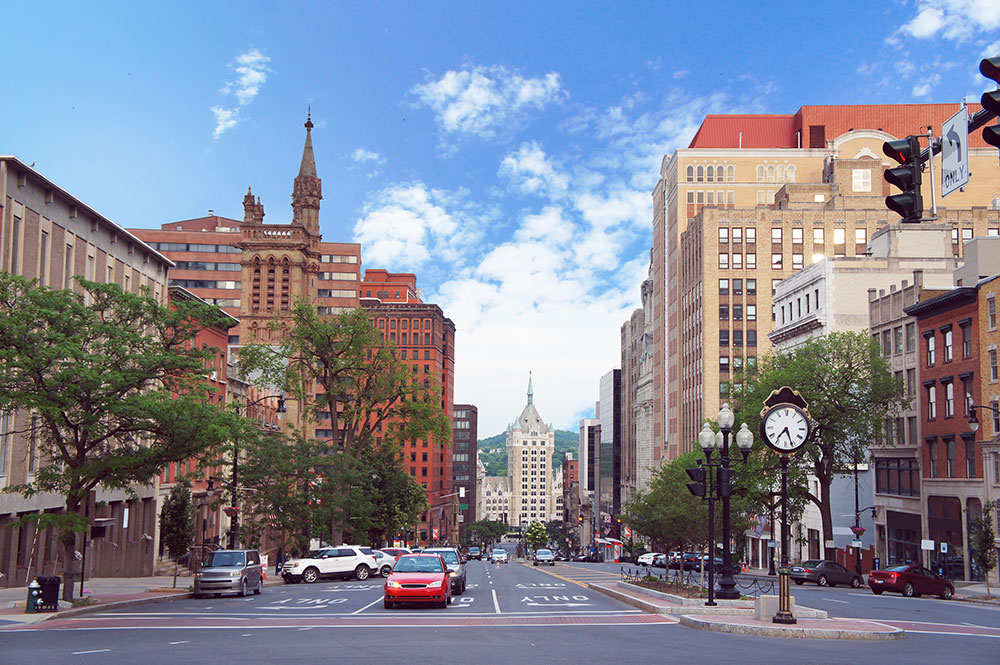 There’s a reason why Frank Sinatra didn’t sing his famous tune about making it in Albany, NY — because it’s way easier to earn a living here. And a lot of people agree, which is why Albany had a population surge of over 17,000 people between 2010 and 2018. The capital region is particularly attracting immigrants because of a tight-knit network of immigrant families who already live there as well as a variety of quality job opportunities that don’t require college degrees.

Plus, the cost of living in Albany is manageable: Just compare a $170,000 average list price on a home in Albany to a whopping $1,550,000 list price in Manhattan — a much easier pill to swallow when trying to start out a career or put down roots.

Top Industries and Employers: Being the capital city of New York, it’s no surprise that government is both the top industry and employer in Albany.

Best Coffee Shop: Uncommon Grounds has been a caffeinated staple of Albany since 1992.

Best Local Beer/Brewery: Fort Orange Brewing started with three friends and a garage and is now a full-scale operation, delivering delicious brewskies in the largest taproom in Albany.

Must-Have Meal: When in Albany, you have to dive into a bowl of Manhattan Clam Chowder from Jack’s Oyster House, which was a restaurant started in 1913 and is very popular with local politicians (AKA prime for eavesdropping).

Best Co-Working Space: The Bull Moose Club, named after Teddy Roosevelt’s Progressive party, is a co-working space for not only freelancers and remote workers but also lobbyists and government workers.

Best Meetup Spot (When Meeting Up Is a Thing Again): The City Beer Hall, which is a bar housed in a beautiful old telephone company building in downtown Albany.

Creative Hub: Live, work and breathe your art in The Barn, which is an artistic community with both studio space and apartments for rent.

Favorite Weekend Activity: Hike in the Albany Pine Bush Preserve, which is located in the Catskills and one of the largest remaining inland pine barrens.

Free Way to Have Fun: Learn all about New York history at the New York State Museum, which is the oldest state museum in the country (established all the way back in 1836). Not into history? Hitch a ride on their 100+ year-old carousel for free.

Read More:
Looking for a Tech Job in an Affordable City? Move to Albany!
Albany is One of the Best Places to Live for Recent College Grads
Need a Laugh? Check Out Albany’s Comedy Scene