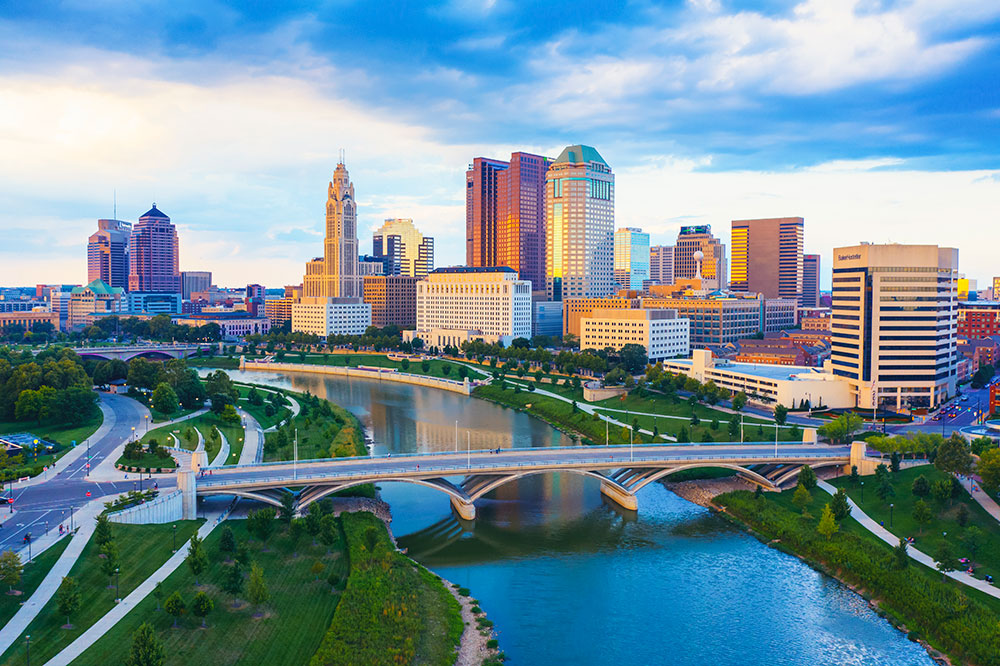 Sure, when you think of Columbus it’s only natural to conjure up images of Ohio State University and their eight-time championship-winning Buckeyes football team, but the city holds so much more than tailgating and university life (though, arguably, Columbus does this better than most other cities). However, beyond the sprawling, beautiful campus is a capital city with tons of industry — including fashion, financial and government — and a booming real estate market.

Columbus is also one of the fastest growing cities in the country, with a 10% growth rate between 2010 to 2017, and is particularly attracting younger, educated residents (the median age in Columbus is just 32 years-old). With a downtown that’s never looked better, cool neighborhoods like the German Village and thriving arts districts like the Short North, Columbus is prepared to wow you at every turn with its Midwestern politeness and its overwhelming amounts of beer, great food (seriously, have you been to the Pearl?) and coffee shops galore.

Top Industries and Employers: Columbus, like many other capital cities, has a lot of bustling industry, but the main sectors are financial, insurance and education. The top employers in the city are JP Morgan Chase, Nationwide Insurance and L Brands (a retail behemoth that owns Bath & Body Works).

Best Coffee Shop: Part coffee shop/part heavenly pastry destination, Fox in the Snow (a restaurant that’s been featured in Food & Wine magazine) is one of those places that is constantly packed on the weekends — but absolutely worth the wait.

Best Local Beer/Brewery: Ohioans are basically expert beer drinkers, so trust when they say that Hoof Hearted Brewing is the real deal. Plus, their quirky beer names, like “$60 Nachos,” “Are We Having Fun Yet” and “I’ll Have What She’s Having” are infinitely fun.

Must-Have Meal: The Thurmanator, a burger from Columbus’s favorite dive-y joint, Thurman Cafe, which has all the burger fixings, plus sautéed onions and mushrooms, ham and two different types of cheese.

Best Co-Working Space: The Idea Foundry is not only a traditional co-working space with outlets, offices and meeting rooms, but it’s also a makerspace where you can access tools for all your DIY projects. Plus, you can have 24/7 access to the building so you can work whenever inspiration strikes.

Best Meetup Spot (When Meeting Up Is a Thing Again): Head to Pins Mechanical Company for libations and a friendly vintage game of Duckpin bowling.

Creative Hub: The “art and soul” of Columbus is the Short North neighborhood, which feeds all of your gallery hopping, local shopping, happy hour needs, and is also home to the annual HighBall Halloween — the country’s largest Halloween party/wicked fashion show.

Favorite Weekend Activity: When the local hometown heroes — The Ohio State Buckeyes — are playing, nothing else seems to matter on a Saturday.

Free Way to Have Fun: Peruse the stunning architecture in German Village, a quaint neighborhood near downtown that was settled by German immigrants in the 19th century.

Local Dream Job: A marketing maven for Bath & Body Works, so you can finally put your love of Warm Vanilla Sugar to good use.

Read More:
Columbus, OH is Home to One of the Coolest City Parks in the US
Why Columbus, OH is the Perfect Place for Creatives and Makers
Love Vintage Shopping? Check Out Columbus!