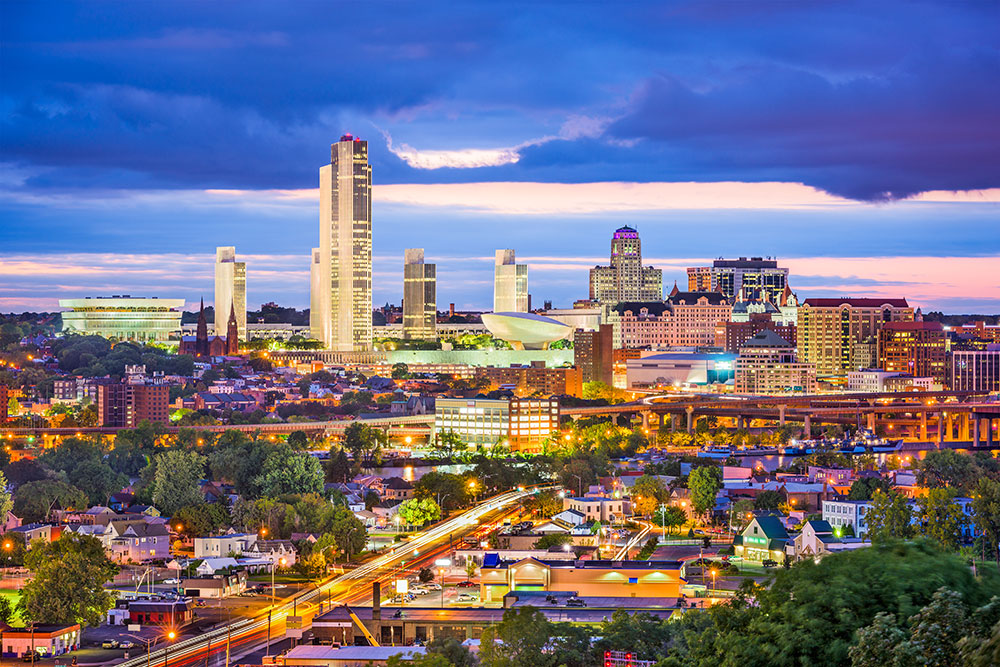 As the capital of New York, Albany has long been a hub of history, culture, art and more. Albany received an above-average rating in health, as the city is home to a number of hospitals (chief among them is St. Peters, which is considered high-performing in a number of advanced surgical procedures). Health education is also a focus for the city, with Albany Medical School producing two Nobel Prize winners and numerous leaders in medicine and research.

The young and politically minded flock to the city from all over New York (and the rest of the country) as they look to join the ranks of the movers and shakers of this powerhouse state. Ready to join them?

Local Obsession: Architecture. Whether it’s the state buildings downtown or the historic row homes in neighborhoods like Center Square, Albany has taken action to preserve these beautiful structures for residents and visitors alike to appreciate.

Climate Described in 6 Words Or Less: All four seasons at their extremes

Top Industries and Employers: State and local governments employ nearly 25% of all Albany residents. Albany also boasts an emerging tech scene, thanks in large part to the University at Albany, which houses one of America’s best programs focused on nanotechnology. Other top employers in Albany include IBM, General Electric and Albany Medical Center

Local Dream Job: City historian, regaling residents and visitors with stories of how Albany came to be.

Quintessential Meal: A fish fry, preferably from Ted’s, a family-run spot that slings deep-fried, flaky goodness by the hundreds on busy Friday and Saturday nights.

Favorite Weekend Activity: Catch a show at The Egg. This historic performing arts center attracts big performers and events on a weekly basis and gets its endearing name from its unique shape resembling — you guessed it — an egg!

Best Brewery/Local Beer: Druthers Brewing Company offers more than a dozen beers brewed in-house, and an eclectic menu that will soak up (some of) the alcohol.

Beloved Bookstore: Dove & Hudson has a mix of new and vintage books at very affordable prices.

5 Most Affordable Cities in New York