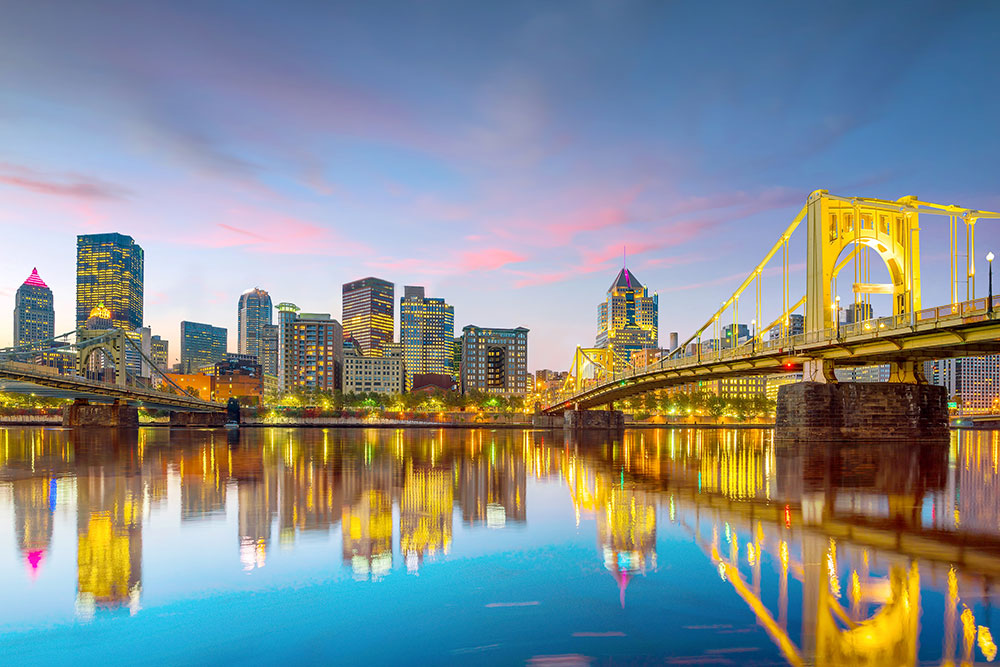 Ninety unique neighborhoods make up this city that’s especially proud of its rich sports history, visual arts and Heinz ketchup. After all, Heinz is a major employer, helping Pittsburgh score high in the economy category. Also setting Pittsburgh apart is its infrastructure. Newcomers will take note of the many bridges connecting different parts of the city (there are about 30 main ones, but more than 400 throughout the city!), but the city’s Department of Mobility and Infrastructure sets important goals, like making sure every household can easily access fresh fruits and veggies, even without a private vehicle.

While Pittsburgh has long been known as “The Steel City,” in recent years it’s seen an influx of young people and tech companies. With local universities including Carnegie Mellon and the University of Pittsburgh driving innovation and nurturing talent, it might be time to update Pittsburgh’s nickname to “The STEM City.”

Top Industries and Employers: You know it as “The Steel City,” but Pittsburgh’s economy is diverse. Leading industries include advanced manufacturing, health care, energy, tech, financial and business services. Aluminum producer Alcoa, Inc. as well as Kraft Heinz Co are some of the largest employers.

Quintessential Meal: Add fries to everything. Not a side order of fries. Actually, put fries on your sandwich. This is most famously done at Primanti Bros.

Favorite Weekend Activity: Cheering on the Steelers, Penguins or Pirates. Come summer, though, a trip to Kennywood, the beloved, old-school amusement park is a cherished tradition.

Free Way to Have Fun: Did you know McDonald’s has a “Big Mac Museum”? It’s where you’ll spot the largest Big Mac statute and learn that the iconic sandwich was invented nearby in Uniontown. If you’ve got kids, the PlayPlace here doesn’t disappoint.

Truly Hidden Gem: Want to see the stars? Not the Hollywood types. The celestial ones. Pittsburgh stargazers know they have a gem: The Allegheny Observatory, one of the major astronomical research institutions.

The Cost of Living Diaries: How Much Does It Cost to Live in Pittsburgh?