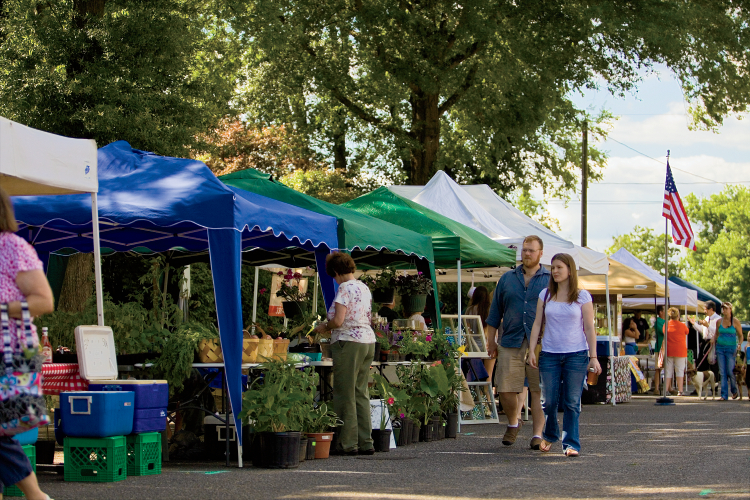 Like any of the artists and artisans participating in the Wilkesboro Open Air Market, Rebecca Catrett appreciates the income she receives from selling her craft there.

But she says the true benefit of being a part of the weekly market can’t necessarily be measured in dollars and cents.

“I’ve had a great success out of it,” says Catrett, an area potter who became a first-time vendor at the Open Air Market in the spring of 2013. “Not only do you have a way of selling something and getting an income out of it, but you also get the publicity from people coming by to see your work. That probably helps me more than making money.”

Therein lies a key reason why the town of Wilkesboro decided to launch an open air market, which runs from April through October at its location on Main Street in downtown Wilkesboro. It allows residents to get to know the regional artists, crafts people and farmers.

“It puts the market patrons face to face with the people” who are creating the art or producing the food, says Andrew Carlton, the city’s director of Planning and Community Development and the coordinator for the Wilkesboro Open Air Market. “Residents have access to fresher produce and more locally produced crafts and products.”

Music and Other Festivities

Launched in 2011, the Open Air Market is open every Friday through the growing and harvesting season. Farmers throughout the region bring their produce, and artists such as Cartrett display and sell their works of art.

The venue also hosts a monthly event known as “Third Friday,” a festival that runs from 4-9 p.m. and features live music, food vendors and plenty of activities for children. A new stage was completed in early 2013 to accommodate the bands and other entertainment.

“We had a great first year and we built on it even more so (in 2012),” Carlton says, “so much so that we received an award of merit from the North Carolina Small Town Main Street program.”