The Cheapest Places for Starting a Business

Calling all entrepreneurs on a budget: This is where you want to go. 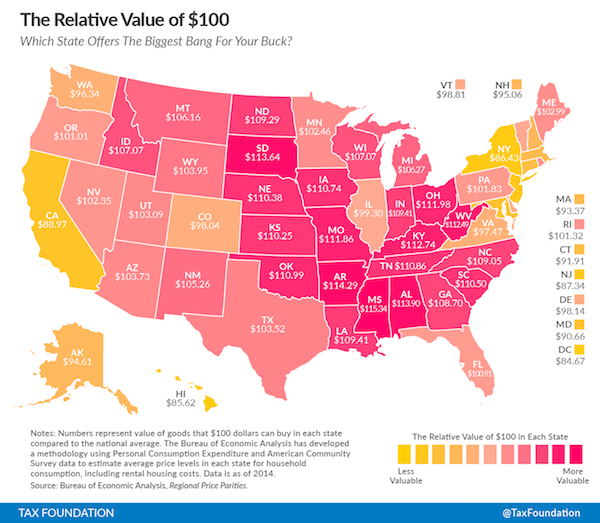 In some communities or states, the dollar of a small startup goes a lot further. For instance, purchasing power is higher around the Great Lakes region and in the Midwest.

This reality was recently made clear in a study performed by the Tax Foundation (see map below). The organization used data from The Bureau of Economic Analysis to show the relative value of $100 in each state and county in the United States.

On the state level, the map showed Middle America gets much more bang for their buck than states in New England. Furthermore, states in the Deep South and Northern Plains saw the most value, with Mississippi leading the pack at $100 equally about $115.34.

On the county level, large metropolitan areas are nearly always more costly than rural areas and mid-sized cities. For instance, the map revealed that $100 is only worth $86.43 in New York State. However, in the Buffalo-Niagara Falls region of the state, $100 is worth $106.60, while a C-note is only worth $81.77 in and around New York City.

Cincinnati ($111.36), St. Louis ($110.50), and Atlanta ($104.60) stuck out as some of the least expensive urban areas. This is particularly interesting for startups given the fact that they have big populations and are the headquarters for large corporations firms like Procter & Gamble and Coca-Cola.

Why Starting a Business in a Small Town Is Easier

Interestingly, price variances do persist across state lines, including in areas outside of large cities. For instance, $100 doesn’t go as far in the California countryside ($103.73) as it does in rural Texas ($113.25). In fact, those in San Antonio are getting more bang for their buck ($105.93) than rural Californians.

It should be noted that higher costs of living and higher taxes in urban areas are often associated with more infrastructure and more government services. That’s important for businesses to consider because low costs don’t mean a thing if you can’t get great internet access and the roads are impassible from December to March.

According to a recent study from WalletHub, New Hampshire, South Dakota and Colorado provide taxpayers with the best return on their taxpayer dollar. Meanwhile, Hawaii, Alaska and North Dakota provide the worst taxpayer ROI.

The 50 Best Cities for Entrepreneurs

In its rankings, WalletHub considered schools, hospitals, water quality, infrastructure, crime rate and percentage of the population in poverty. Wisconsin, Connecticut, Minnesota and Vermont all ranking high for education, a key factor for business looking to source educated workers. These states were also in the top ten for overall government services ranking.

Startups also need fast internet speed and those can be found in some of the country’s smallest states, according to by digital traffic company Akamai. Delaware, Connecticut, Massachusetts, District of Columbia and Washington State are ranking the fastest, with peak Mbps speeds ranging from 75.7 to 62.6. Meanwhile, Arkansas had the lowest peak speed at 33.1 Mbps.

As you can see, startups can get a lot of bang for their buck outside of big urban magnets like New York, San Francisco, Los Angeles and Chicago.