Discover how one historic mansion in Iowa has become a cultural hub that inspires a community's interaction with history and the arts. 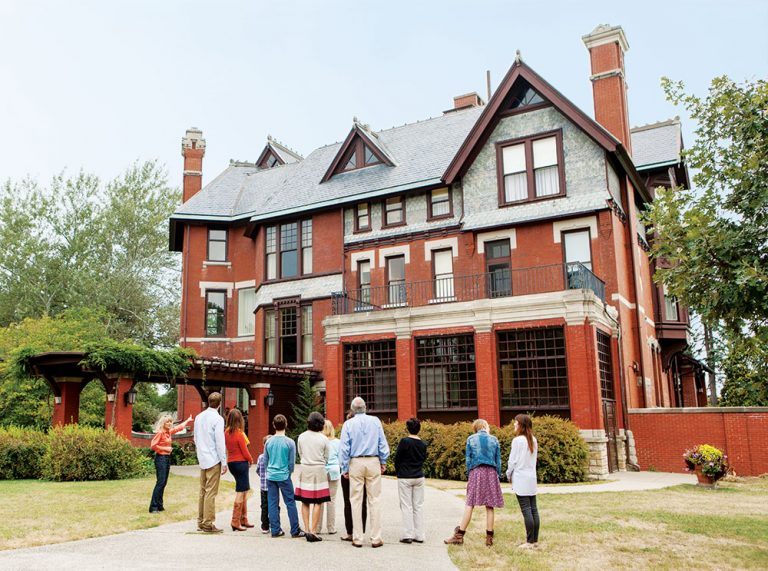 Cedar Rapids, IA is steeped in history, and traces of its past can be seen throughout the city. One unique historic landmark Cedar Rapids is the Brucemore, a historic mansion surrounded by 26 acres of gardens. Today, this home has become a cultural hub, inspiring community interaction with history, preservation and the arts, but as visitors find out while perusing the grounds and taking tours, the house has had quite a past.

“The Brucemore has always been a family home,” says Jessica Peel-Austin, museum program manager at the Brucemore. “When it was passed on to the National Trust for Historic Preservation, they didn’t want it to be a monument, they wanted to make it a place for the community, with a strong cultural component that carried on the tradition of promoting the arts.”

Started with the Sinclairs

The Brucemore’s story began when Cedar Rapids was a fledgling town and newlyweds Thomas McElderry (T.M.) and Caroline Sinclair immigrated here with the intention of expanding his family’s meatpacking business. They opened the T.M. Sinclair & Co. plant in 1871, and the company soon became the largest meatpacking plant in Iowa and the fourth largest in the world.

In 1881, T.M. died unexpectedly, leaving Caroline with six children, while her brother, Charles, assumed leadership of the company. It stayed in the family until 1930. In 1884, Caroline hired architects to build a 21-room mansion, which she named Fairhope.

Mount Trashmore is an eco-friendly recreation area that features three trails for hiking and biking (and did we mention the amazing views?).

“The home the family had been in was in a residential area closer to downtown, and Caroline wanted something that was out in the country, since that was more of an ideal place to raise a family,” Peel-Austin says. “She bought 10 acres and started construction on a 55,000-square-foot home. Even though it took two years to complete, it had all the modern amenities of the time … and she and her family lived there for about 20 years.”

Since her children went to school in Philadelphia, where Caroline had family, the Fairhope estate became more of a summer retreat. In 1905, with her children grown, she decided to trade homes with another prominent Cedar Rapids family, the Douglases, who owned a more manageable home on Mansion Row.

Meet the Douglases and the Halls

“George Douglas and his wife, Irene, were industry leaders in Cedar Rapids, too,” Peel-Austin says. “George’s father started an oatmeal milling plant that eventually merged with Quaker Oats and was a large employer in the community, and George founded a business producing cornstarch and corn oil, and they are the ones we largely focus on in our interpretation at the museum because they really transformed the estate.”

The Douglases, who raised three daughters here, named the estate the Brucemore and added 23 acres to the property. They developed a carriage and guest house, a pond, formal gardens, a squash court, a book bindery, a greenhouse and a servant’s duplex.

By the mid-1920s, their eldest daughter, Margaret, had married Howard Hall, a successful industrialist. In 1919, he and a partner purchased a controlling interest in Carmody Foundry, which they renamed Iowa Steel and Iron Works. They incorporated the former Bertschey Engineering Company as the Iowa Manufacturing Company in 1923, producing rock-crushing equipment instrumental in paving local roads and, later, even interstates. The couple lived in the estate’s guest house until Margaret’s parents passed away, then they moved into the “big house.”

The Halls added a modern flair to the estate, adopting a lion cub named Leo and creating legendary entertaining spaces. The couple, along with Howard’s mother and sister, made significant contributions to the community that are still having an impact now.

Today, visitors have various ways to enjoy this storied estate, from exploring the mansion and walking the gardens to enjoying events held on the property, such as theater productions, music and orchestra performances, and art workshops.

Plus, food produced from the gardens and orchards goes to a local food bank. This house and its residents helped make Cedar Rapids what it is today, and it continues to positively impact the community and those who visit its grounds.

8 Fun Things To Do in Cedar Rapids, IA

If you consider yourself a Cedar Rapids newbie (or just visiting for the weekend!), we have the must-do list for you to complete.