This city center has overcome a devastating flood to become a prime destination chock full of amenities and living options. 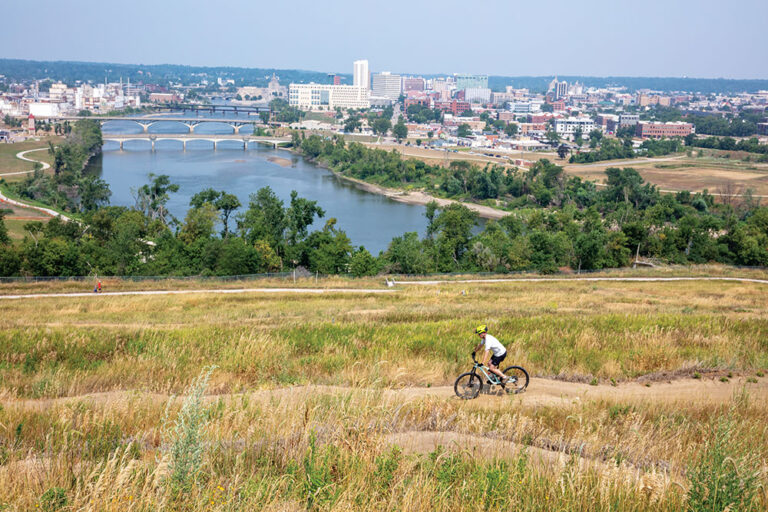 The impetus for much of the recent renaissance is a natural disaster that shows the true grit of this Midwest city.

Devastated by a 2008 flood that resulted in more than $5.4 billion in losses in 10 square miles, Cedar Rapids has amassed impressive stats beyond recovery.

“We want downtown Cedar Rapids to be a place to come to, instead of drive through.”

In addition to rebuilding what was lost and improving facades, the city made additional investments to increase the walkability and vibrancy of downtown. One-way streets were converted to two-way, with bike lanes and parking improvements. The new layout emphasizes downtown as a destination.

“We want downtown Cedar Rapids to be a place to come to, instead of drive through,” says Cedar Rapids Mayor Tiffany O’Donnell. “Small businesses, restaurants and retailers have reinvested in our core, so today downtown bustles with life and entrepreneurial spirit. New and infill office and residential developments have also been major, striking changes in our downtown in recent years.”

“More than just a wall, our system is focused on connecting residents to the river when it isn’t flooding, with greenway parks, bike trails, a popular downtown amphitheater that draws national touring acts, and more,” O’Donnell says.

All the latest additions to downtown are topped off with housing. Adding residential units to the downtown core has long been a goal, O’Donnell says, and in recent years the city has seen an increase in developers interested in converting historic buildings and office space into modern living options.

Over the last 10 years, Cedar Rapids has enjoyed more than $600 million in private investment, which includes over 1,000 new housing units, including 300 affordable units.

“There has been a strong mix of options added, from affordable to market rate. This has helped extend the hours of our downtown, bringing life and vibrancy around the clock,” she says.

Street-level activation has been so intense that the Downtown Self-Supported Municipal Improvement District and Cedar Rapids Metro Economic Alliance created the Race for the Space contest to identify which local entrepreneur will be the hot new downtown business.

The lucky startup, KETO Kitchen, was the grand prize winner and received $20,000 to use for rent, build-out and/or overhead costs, $7,500 credit toward architectural design services and a free eight-week owner education course.

Get the inside scoop on what it’s like to be a local in Cedar Rapids.

More improvements are on the way. About 750 new housing units are under construction or in the pipeline. The Reinvestment District project will focus on First and First West, the Eighth Avenue festival grounds and river recreation.

“Downtown is the entryway to our welcoming community,” O’Donnell says. “There’s simply nowhere better to locate for convenient access to a large population base, city services, transit and alternative transportation options, culture, and community.”

Get to Know Cedar Rapids