In these creative cities, a blank wall is a canvas. 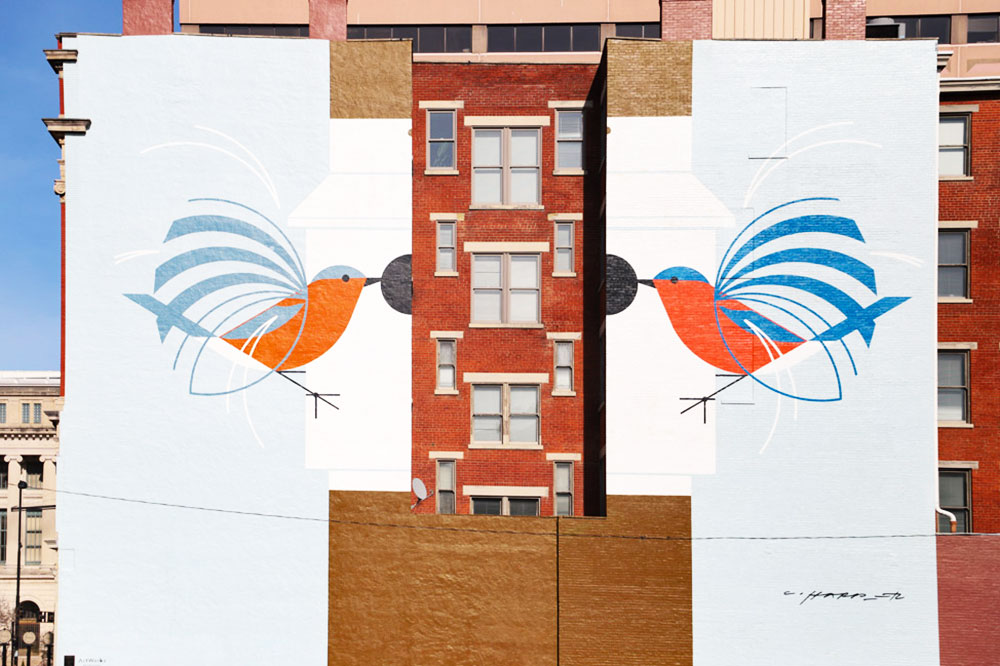 While street art and murals were once viewed as blights on a cityscape, in recent years, many cities have not only sanctioned public art, but turned them into city-wide celebrations of local artists and creativity. It is not uncommon to see gorgeous, colorful murals on open walls everywhere these days, and even smaller cities are getting in on the act. Kristin Luna, journalist and founder of public art nonprofit DMA-events says, “Public art is proven to drive economic activity, boost mental health and instill a sense of public safety.”

Additionally, Luna says, “Murals are pretty cost-effective if you measure them against more expensive forms of improving a city’s aesthetic, like streetscapes, building facades or adding 3D art such as sculptures. They also can be executed very quickly. If you own a private property, you don’t need permission to add art to your facade, so as long as you know a muralist for hire, a mural is something that can be done in as little as a few hours.â€ They are a simple way to quickly create or nurture a sense of culture and creativity in a city.

Here are seven cities across the country that have embraced the mural trend and have extraordinary public art to show for it. 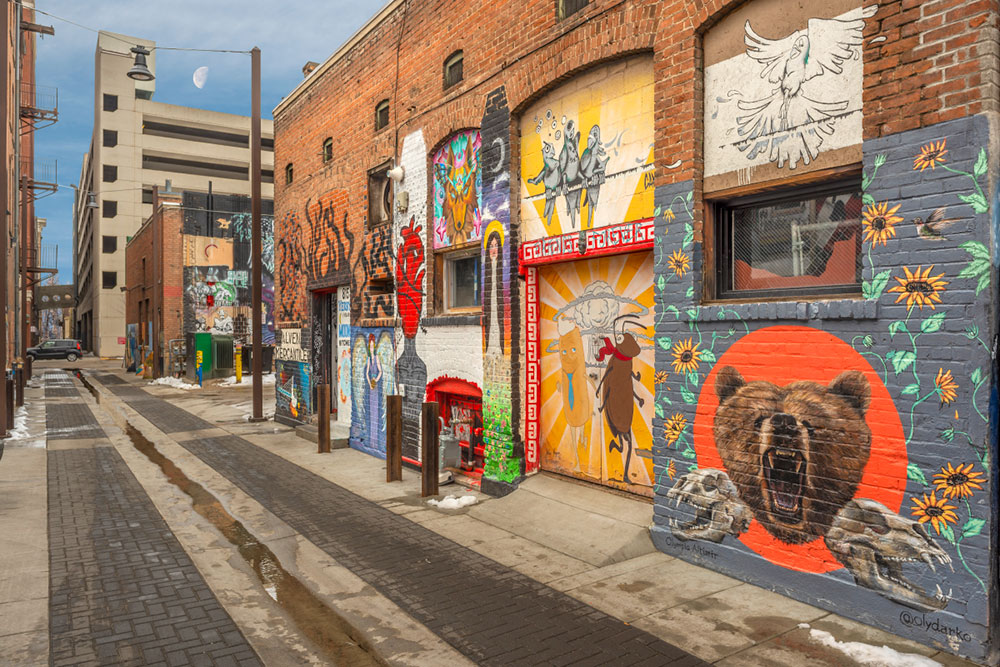 What started as a single alley door being painted has now evolved into a major tourist attraction: Freak Alley. Said to be the largest outdoor art gallery in the Northwest, Freak Alley is now a must-see destination for locals and tourists alike. This amazing display of art started in 2002 but is now widely known as one of the best destinations for seeing outdoor art. The murals rotate every few years, and eager artists can submit their concept in hopes of having their art included. A new director took over the Boise-based project in 2019, and she hopes to expand the project. Freak Alley is completely run by volunteers and donations, and is attached to an indoor gallery that sells art to fund the outdoor murals. Freak Alley also prides itself on being inclusive and welcoming to all who wish to be involved, and continues to put forth some of the most interesting and unique art in the Northwest. 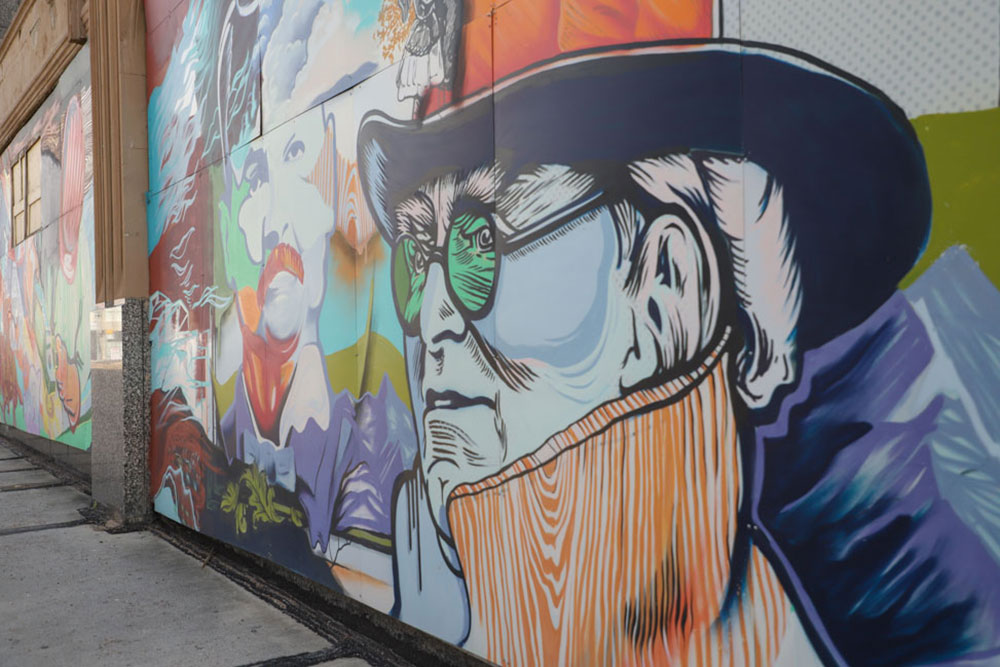 While Nashville is well known as a creative hub, if you’re seeking street art, don’t miss Memphis! International artist Julien de Casabianca is credited with starting the influx of murals as part of his International Outings project, which converts the walls of city structures into mural canvases. He started by scouring the archives of the Memphis Brooks Museum of Art and found images he thought could be expanded into large-scale murals. Since then, murals have exploded all over the city, taking advantage of Memphis’ historic and unique alleys. While alleys were once necessary for firefighters, trash collection and other city services, they are now passageways back in time that also serve as unique canvases for Memphis’ mural artists.

Luna says, “Memphis is a city that has always embraced the creative arts – after all, music drives much of its modern-day history. But in the past decade, dozens of murals have popped up throughout the city, creating micro-neighborhoods of activity in areas of town that were previously inactive or more residential in nature.” 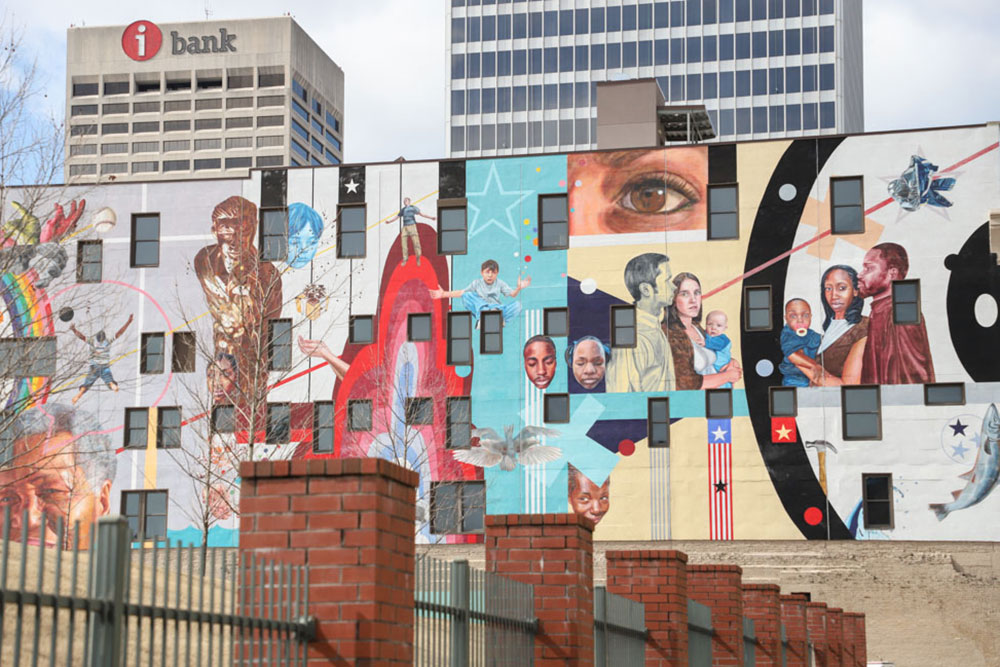 Additionally, the city of Memphis itself has been incredibly supportive of these murals and installations. “Having a city government that embraces and supports this kind of creativity is clutch; when cities try to intervene with expressions of art, they’re impeding on residents’ First Amendment rights, and things can get sticky fast. But from everything I’ve seen in Memphis, the city is supportive of its artists’ rights and need to express themselves. In fact, you’ll find that Memphis Travel, the tourism arm of the city, has even sponsored several murals around town and in other cities like Denver,â€ says Luna. 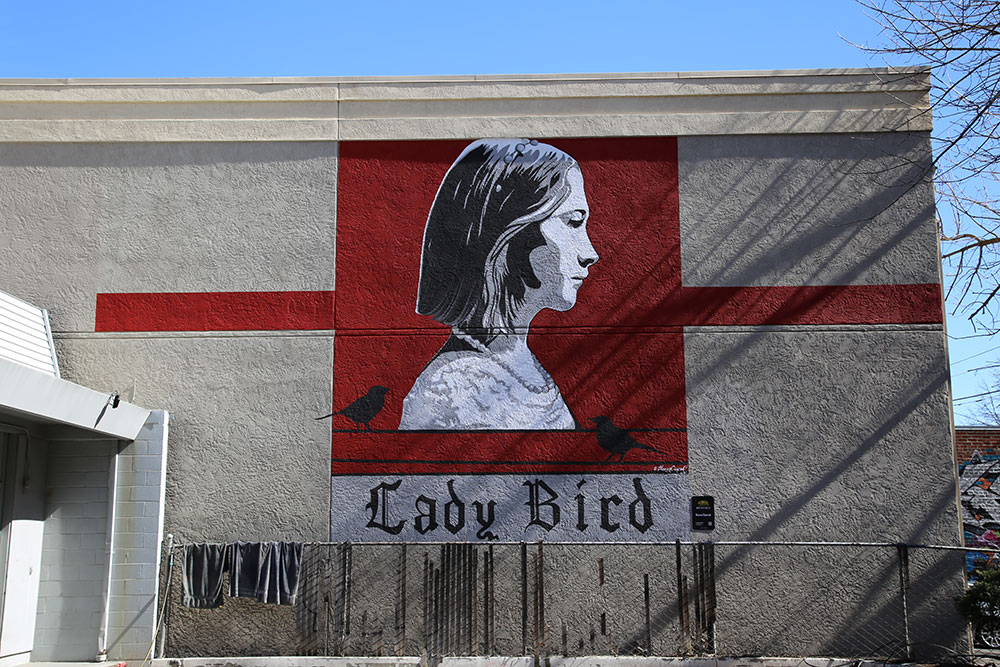 Additionally, Wide Open Walls has spurred the addition of many other art-focused festivals in Sacramento, including Paint The Park with the city’s professional soccer team, Sacramento Republic FC, and Murals on the BVLD, which brought public art to the up-and-coming Del Paso Heights neighborhood. Kristin Luna says, “The CEO of Visit Sacramento recently told me that they’ve seen a direct correlation in an increase in tourism since Wide Open Walls was founded, and I believe that’s true in any city that’s truly embraced adding murals to its urban landscape. Millennial travelers gravitate toward Instagrammable moments – and what’s more Instagrammable than a bold, colorful wall as a backdrop? – but more so, murals provide fun, free opportunities for travelers of all ages.” 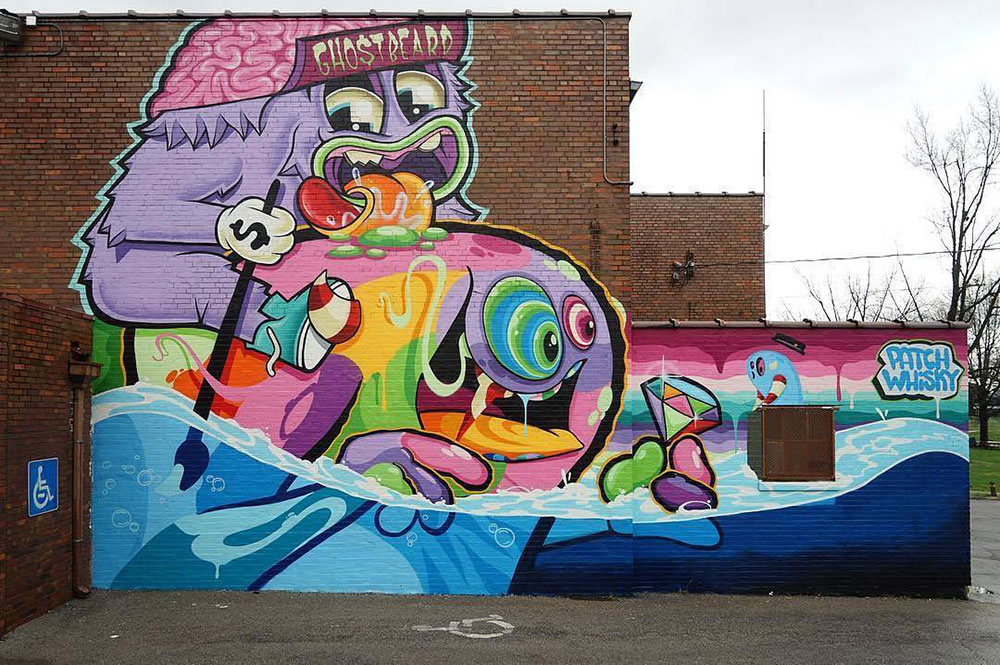 Lexington, KY is home to some incredible murals that have transformed this city in recent years. The city boasts several organizations that are focused on adding street art to the city. LexArts is sponsored by the Lexington-Fayette Urban County Government which unites artists, businesses, neighborhoods and artists to create outdoor art. “LexArts is able to grow the Lexington Mural Project,â€ stated Jim Clark, LexArts’ President & CEO, “because of the generosity and civic pride of three business-owners who wanted to contribute to the beautification of Lexington.”

For those looking for more radical art, Lexington has PRHBTN. According to the organizers, “PRHBTN is an annual celebration of art forms that have been criminalized, marginalized, and under-appreciated in the mainstream, featuring public murals alongside an exhibition of street art works in a space that complements the raw, powerful nature of the message and artistry of each piece.â€ PRHBTN boasts provocative art made by artists of all ages and disciplines. 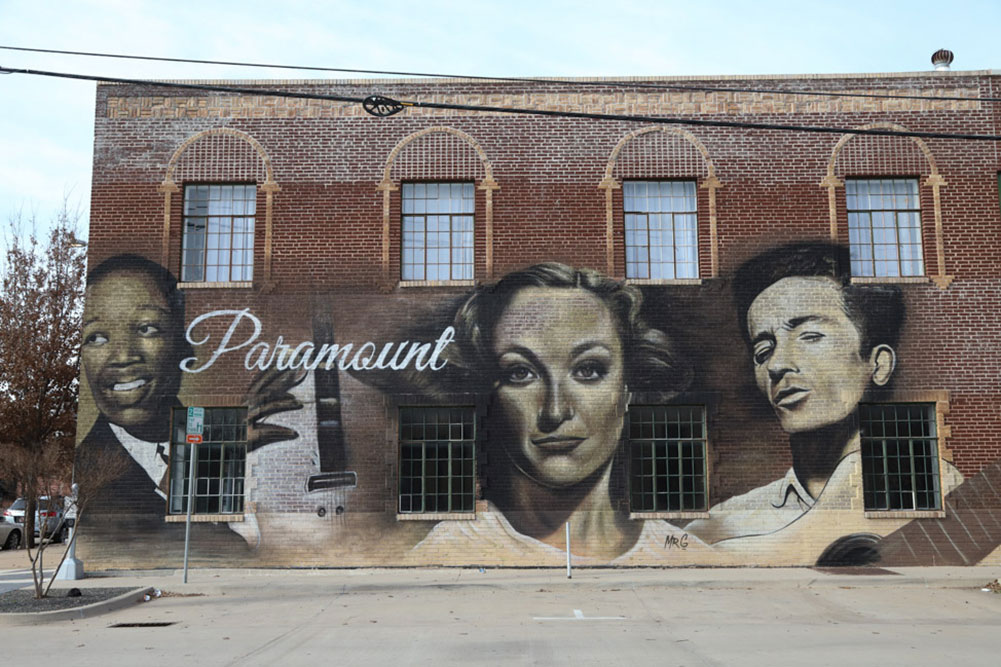 Oklahoma City has gotten in on the action of having public art everywhere. From the minute you land at Will Rogers airport, you are greeted with bright and colorful art, and there’s no shortage of murals around the city. 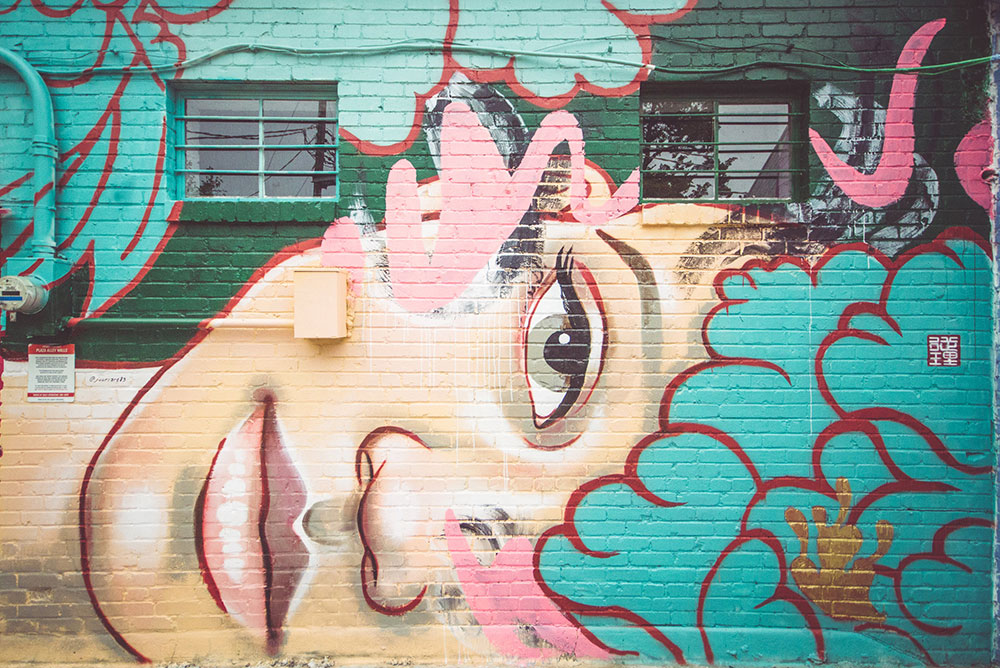 Cincinnati got its mural inspiration via some brotherly love: In 2007, former Cincinnati Mayor Mark Mallory did a “city exchangeâ€ with Philadelphia, PA, which is known for its thriving street art. Mallory was inspired and upon his return to Cincinnati, worked with Cincinnati ArtWorks to challenge artists to create a mural in each of Cincinnati’s 52 neighborhoods. According to Kristin Luna, “The ArtWorks process is admirable: Notable artists design murals, and then a team of teaching artists and youth apprentices execute the actual design. Many of these youth, who are paid a living wage for their work, have never before painted. They’re not only learning a skill and making money, but taking pride in the fact that they’ve helped transform the aesthetic of a major city.”

Living the Dream: I’m a Mural Artist in Nashville

Beyond this incredible process, Cincinnati has taken its art to new levels by introducing the BLINK festival. BLINK blends murals with digital projections, performance art and light installations, including projection mapping (a technique that includes light, music and animations with murals and three-dimensional surfaces). Cincinnati is carving out its place as a major art destination in the United States through these amazing artistic processes. 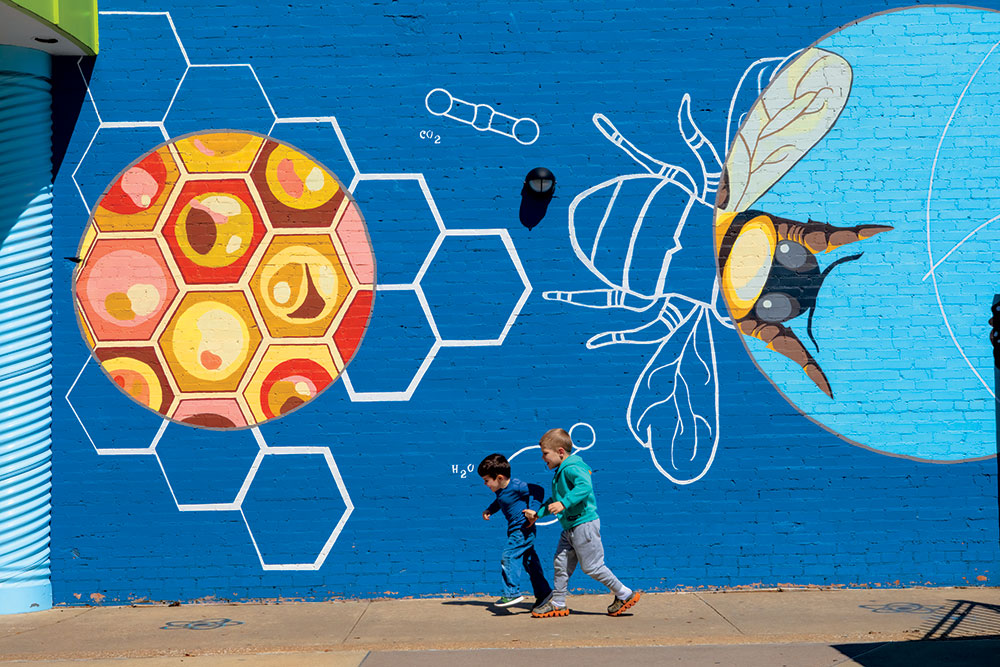 Magnificent murals scattered throughout Tyler fill up large, blank walls with massive explosions of color and creativity, which allows the city to get crafty with spaces that would be otherwise left unused. This artsy Texas city combines a love of public art with more classical interpretations, from the art deco exterior of Liberty Hall to the city’s Gallery Main Street, there truly is something for everyone.

Murals line the walls of downtown and represent the quirky community. On South College Street, one particularly bright mural of wildflowers proclaims ‘Be Happy!’ – reminding Tyler’s residents that the city and its art are one of a kind. Visit the Caldwell Zoo, the Children’s Park, Tyler Rose Garden or one of the Beauty and the Box installations on display throughout town to get a small sampling of some of the city’s colorful creations.