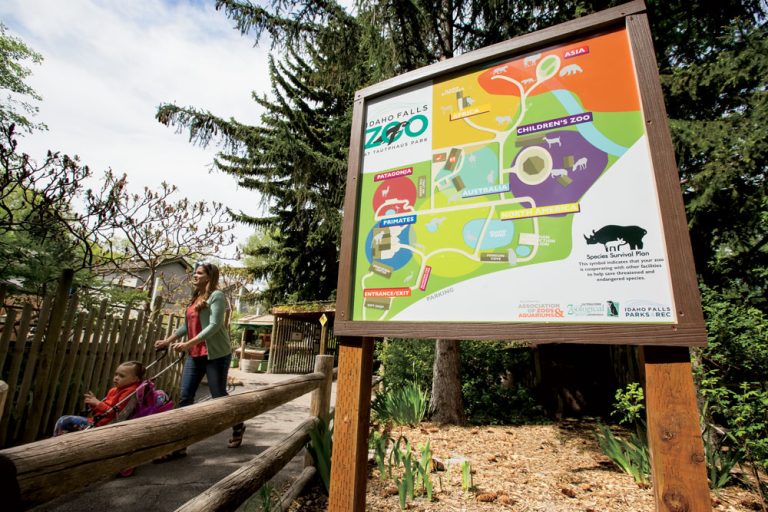 There’s a lot to see and do in Idaho Falls, and a new initiative is making it easier than ever for visitors to discover all the city has to offer.

An ambitious rebranding effort, launched in 2016, is giving the city a new logo, new directional signage, educational signs for zoo exhibits, light-post banners, a new website and even a new look for city vehicles. The Signage and Wayfinding Master Plan, with a projected cost of $700,000, is giving Idaho Falls a fresh new brand that draws attention to the things that make the city such a desirable place to visit.

“The major goals of the signage and wayfinding master plan are to establish universal design standards on citywide signage and wayfinding that is reflective of the city’s brand identity and guides travelers to city facilities, including downtown and other major destinations,â€ says Greg A. Weitzel, Idaho Falls Parks & Recreation Department director. “Our hope is that the new system will help promote tourism by highlighting key attractions and emphasizing Idaho Falls as a unique destination.”

In 2013, a new city administration, interested in creating a unified, more coherent look for the city’s image, issued a request for proposals to develop a comprehensive new wayfinding and signage program – the first phase in a long-term rebranding initiative.

In looking at the existing signage around the city, Idaho Falls public information officer Kerry Hammon says, you’d “notice that the signs were different colors and shapes; had different fonts, logos and inconsistent names for amenities; and parking was not easily identifiable, especially downtown.”

“The goal of wayfinding is to attract travelers and then easily guide them to all the wonderful amenities our city has to offer, such as the Idaho Falls Zoo, Museum of Idaho, our three municipal golf courses or the Colonial Arts Theater,” Hammon adds. “The easier we make wayfinding for our guests, the longer they will stay, and that’s great for economic development.”

After much consideration, a graphic concept was settled upon that reflects the graceful movement of the falls themselves against a striking blue background. In April 2016, officials broke ground and began placement of more than 140 new signs around the city, along with a landmark stone monument with a dramatic water feature at the entrance to the city off Interstate 15.

Check out the best neighborhoods in Idaho Falls

In conjunction with the wayfinding initiative, the Idaho Falls Zoo was awarded a $14,000 grant from the CHC Foundation in 2015 to upgrade its educational and conservation signage, which reflects the city’s overall new signage design. The new signs, rolled out in 2016, are particularly welcome in light of continuing advances in scientific knowledge about animals and natural resources, which create the need for updated information for the public.

Reaction to the new signage and wayfinding has been encouraging, Hammon says. Interestingly, when she recently spoke to high school students about the city, no one could describe its official seal, but when asked if they could identify the new city logo, their response was enthusiastic.

“Their faces brightened and they said, ‘The word Idaho Falls with the water lines above it. I’m starting to see that logo everywhere!’ â€ Hammon recalls. “They went on to say that when they purchase an item from Nike or Reebok, they are getting a quality product they can trust. They understand branding. They get it. That conversation spoke volumes to me.”

The wayfinding project itself will take time to complete, as will the rest of the city’s efforts to establish Idaho Falls’ new look.

“Our new visual identity – logos, color schemes and so on – have been worked into letterhead, business cards, memos, city fleet, etc. We are also getting ready to launch our new website, which will also reflect our new branding/visual identity,â€ Hammon says. “We are accomplishing what we set out to do – create a sense of unity, of trust and of quality.”

“Our hope is that the new system will help promote tourism by highlighting key attractions and emphasizing Idaho Falls as a unique destination.”