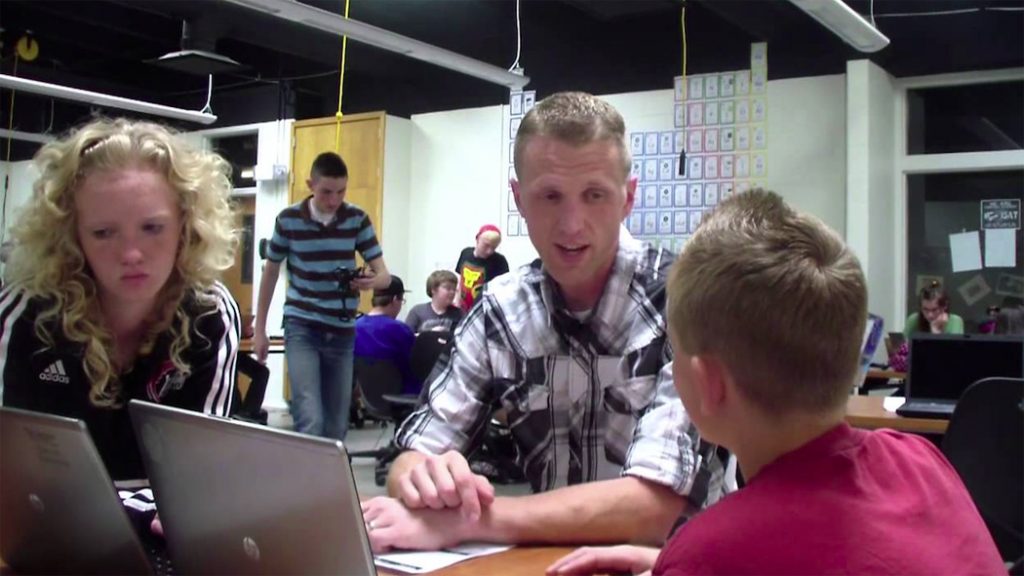 Inspired by a trip to a New Tech Network school in California, Idaho Falls School District 91 Board members returned with a bold idea to build a new school that embraced the project-based learning principals heralded by the nonprofit organization.

“We recognize that the world is changing,â€ says Margaret Wimborne, coordinator of Communications and Community Engagement for Idaho Falls School District 91. “Students not only need knowledge when they leave high school, but to be successful beyond high school, they also need what are commonly referred to as 21st-century skills, [which are] the ability to communicate clearly, collaborate, be creative and think critically.”

In 2012, the district partnered with the New Tech Network and opened Compass Academy for 9th-12th graders. Compass Academy features smaller class sizes – the school is limited to just 150 students per grade level based on a lottery system meant to mirror the student population as a whole – along with integrated instruction and a project-based curriculum, through which students learn to problem solve and work as a team.

“All freshman, for example, take a world history class, but that class is integrated with an art history class,â€ Wimborne says. “Seniors take U.S. government, an Idaho graduation requirement, but it’s integrated with a senior English class, so students may be studying the Bill of Rights and then writing essays about what they learned.”

District 91 serves some 10,000 students in 12 elementary schools, two middle schools and four high schools, and Wimborne says the district is committed to arming all students with the skills they’ll need to compete in college and beyond.

“I think it’s critical in any community to provide good education that is going to prepare students to be successful in life beyond high school. With the world changing as quickly as it is, it’s really important the kind of education we provide changes as well,â€ she says. “Our goal with Compass Academy wasn’t to just open one school that used some cutting-edge instructional strategies or practices. Our goal was really to use it as a catalyst to spark change throughout the district.”

Some of those changes include issuing laptops to every high school student, blended classes at the high school level and using hands-on experiences to teach students to apply what they learn in the classroom to real-world issues. Wimborne says the partnership with New Tech allows teachers to learn new strategies and techniques through a series of professional development training and coaching sessions. In fact, the district invested $500,000 to contract with the organization.

“When we opened [Compass Academy], we signed a five-year contract with the New Tech Network,â€ Wimborne says. “Most of that fee goes to pay for professional development, so our teachers are trained and have practice and coaching on how to do this kind of instruction effectively.”

A sign that the district’s investment is paying off: Compass Academy graduated its first class in 2015.

“We had an awful lot of proud parents,â€ Wimborne says about the graduation. “That’s really what it’s about – making sure we are providing an education that’s going to give children the knowledge, skills and attributes they need when they leave school.”

Our goal with Compass Academy wasn’t to just open one school that used some cutting-edge instructional strategies or practices. Our goal was really to use it as a catalyst to spark change throughout the district.