9 Things You Didn’t Know About Indianapolis

You may know Indianapolis as home of the Indy 500 or the Indianapolis Colts. But its fashion industry and tech scenes are also smoking hot. 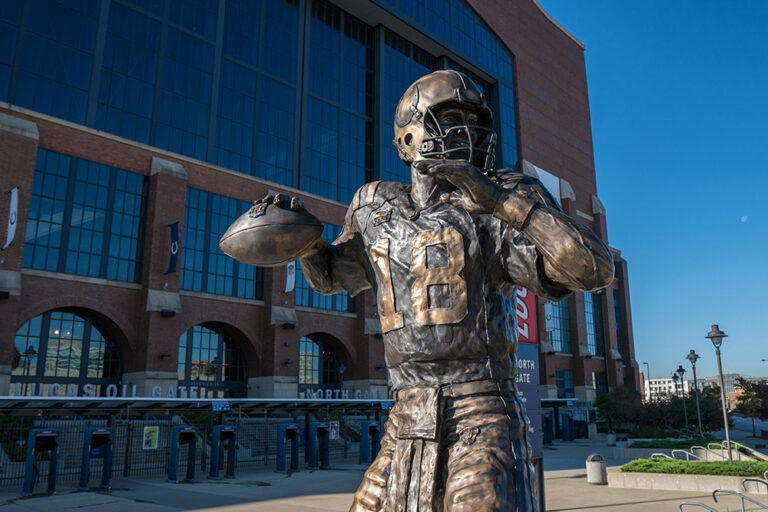 Ask anyone what comes to mind when they think of the city of Indianapolis and they will probably say it’s the home of the world-famous Indianapolis 500 and the Indianapolis Colts professional football team. But Indiana’s capital city has much more to offer. For instance, did you know Indianapolis has a thriving fashion industry with global visibility? Or that Indy has a rich jazz history and is second only to Washington, D.C, in its number of war memorials? Read on to learn more about the city at the heart of the Crossroads of America.

It’s the Home of the Largest Children’s Museum in the World.

Located mere minutes from the center of downtown, The Children’s Museum of Indianapolis is the largest children’s museum in the world, and one of the highest-rated museums to boot. Featuring five floors of interactive fun, there is truly an exhibit here to tickle anyone’s fancy. Visitors can explore the National Art Museum of Sport, with art depicting some of the greatest moments in sports history, and feast your eyes on Dale Chihuly’s 43-foot-tall Fireworks of Glass sculpture. “Beyond Spaceship Earth”features a unique Schaefer Planetarium & Space Object Theater, replicas of parts of the international space station, and an Astronaut Wall of Fame, while “National Geographic Treasures of the Earth” showcases treasures found across the world (including a real shipwreck)!

Indy’s Airport is a Dream.

For the 10th year in a row, the Airports Council International has named the Indianapolis International Airport the Best Airport in North America serving between 5 million and 15 million travelers per year. The IND was bestowed this title in 2020 because of its excellence in customer experience during the pandemic, and passengers themselves scored the IND high on 34 categories including shop and restaurant options, bathroom cleanliness and security screening. The airport was also recognized with an Airport Health Accreditation, one of only eight in the nation that have gone above and beyond in terms of cleanliness and safety measures during the pandemic.

History is not forgotten in Indy. The city features the most acreage of anywhere in the country dedicated to our nation’s fallen, and it is second only to Washington DC in its number of war memorials. The impressive 284-feet-tall Soldiers and Sailors Monument honoring those who fought in the Civil War is in the heart of the city in Monument Circle. The Veteran’s Memorial Plaza is in the seven-block war memorial district and honors all veterans from Indiana. The American Legion Mall spans two blocks and its Sunken Garden was built in 1931 to honor Hoosiers who have died in war. It also is home to the tomb of the country’s first World War I casualty, James Bethal Gresham. Also in the American Legion Mall are the city’s memorials for the Korean and Vietnam Wars as well as a large half circle monument for World War II.

In September of 2019, mass transit in Indy got a major upgrade with the launch of the nation’s first all-electric rapid bus transit (BRT) line. With the opening of IndyGo’s Red Line, Indianapolis has pioneered a way for cities to think greener about transit and proves that rapid transit doesn’t have to be as costly as rail. The Red Line covers 15 miles and affordably connects riders to the downtown area, universities, large employers and various residential neighborhoods. The immediate success of the BRT system has prompted the city to continue adding lines, including the Purple Line that is expected to open in 2024.

Its Fashion Industry Is Hot.

Indianapolis is poised to become a fashion hub. Several fashion organizations are rooted in Indy, including the Indiana Fashion Foundation, which aims to support professionals in fashion, and PATTERN and Passion 4 Fashion, two organizations that connect fashion talent to companies globally. The Indiana Fashion Foundation hosts an annual Indiana Fashion Week that brings together designers from all over the state with a runway show and a fashion industry conference. Founded in 2006 by designer Berny Martin, Midwest Fashion Week features events not only in Indianapolis, but now in fashion capitals like Paris, New York, Chicago and Johannesburg. Indy is also home to StitchWorks, a sewing manufacturing and training center that helps connect indie designers to resources and production services.

You’ll find public art on every corner in Indy, plus lively performances, an international film festival and a thriving fashion industry.

It’s a Hub for Competitions.

Competitions go beyond sports in Indy. “Known for the Indianapolis 500 and a passionate tradition for basketball, Indy leaned into its competitive nature for the benefit of community growth,” said Joe Pellman of the Indy Chamber.

The city plays host to a plethora of competitions each year, including the world’s leading award for animal conservation, the Indianapolis Prize, that awards $250,000 to a top animal conservationist. Musical competitions are also plentiful in Indy, with the International Violin Competition of Indianapolis, the American Pianists Association Awards, and Drum Corps International’s World Championships all hosted in the city.

Indy is also home to some lesser-known sports competitions. The Circle City Classic, one of the largest classic football games in the nation, features teams from historically black colleges and is in its 38th year. Meanwhile, esports is having its moment in Indy with the recent announcement that the city was chosen to host the NBA 2K League’s fifth season.

It Has a Vibrant Jazz History.

Everyone knows that New Orleans is the birthplace of jazz. But not everyone knows that Indianapolis has a significant jazz history, too. Jazz greats like Freddie Hubbard, J.J. Johnson, Slide Hampton and Wes Montgomery all hail from Indianapolis. Indiana Avenue was the hub for the city’s thriving jazz scene from the 1920s to the 1950s. Today, the only building still standing from jazz’s glory days on Indiana Avenue is the magnificent Madam Walker Legacy Center, a venue that still hosts musicians and comedians regularly. Indy has a nickname that hails from this jazzy era: Naptown. Naptown was used as a hip and endearing nickname for Indianapolis in reference to Indianapolis’ fourth syllable, “nap,” and residents are again embracing the nickname.

Indy Is the ‘Launchpad for Broadway.’

Indy is home to Discovering Broadway Inc., an organization that hosts Broadway creative teams in order to help them develop and fine-tune their Broadway shows before they hit Broadway. It also offers educational programs and seminars to the public on how a musical is created, as well as master classes for future Broadway stars. Some past master classes include “Newsies” and “Bandstand” star Corey Cott, who coached 14 young aspiring stars, and a Broadway audition class led by the star of Broadway’s “Mean Girls.”

7 Reasons To Launch Your Small Business in Indianapolis

A prime location, easy access to talent and tons of resources for entrepreneurs are just a few of Indy’s assets.

It’s a Hotbed for Software as a Service Start-ups.

The tech scene in Indy is thriving. In particular, the growth of Software as a Service (SaaS) companies in the Indy metropolitan area is unparallelled. Just a few of the dozens of major SaaS companies here include SalesForce, SmarterHQ, Demandwell, Springbuk and Odyssey. More than 200 SaaS companies are headquartered in the Crossroads of America, and they are drawn to Indy thanks to the city’s incredible amenities.

“Indianapolis is a natural hub for SaaS businesses and investment for numerous reasons,” said Sam Smith, co-founder of Demandwell. “The cost of living is highly attractive for both employers and residents, allowing more dollars to go wherever they matter most. Geographically, the city is a convenient middle ground for the eastern part of the U.S., with easy access to Chicago, New York, and the East Coast. The Indianapolis airport is consistently rated among the best in the country, and offers a growing list of direct flights to both coasts. Navigating inside the downtown area is easy compared to other major cities, and a quick walk can easily put you in on the other side of town.”