You'll find public art on every corner in Indy, plus lively performances, an international film festival and a thriving fashion industry. 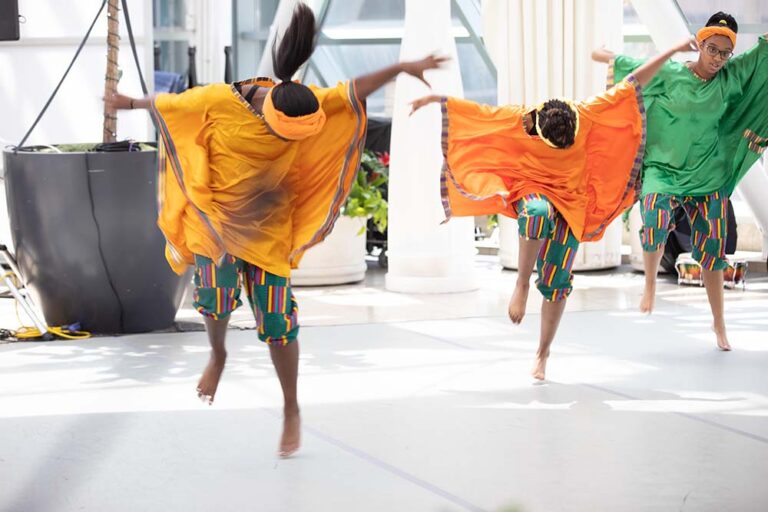 When you think of Indianapolis, you might think of it as a mecca for racing enthusiasts or a destination for sports fans, but the city also boasts a vibrant arts community and a flourishing fashion scene. Indianapolis is fast becoming one of the country’s top under-the-radar destinations for art, film and fashion.

“When you come here, you’re not just in a sports town, you’re in an arts town, too.”

Indianapolis is home to several well-known national brands including Lids and Union Western Clothing from Jerry Lee Atwood (worn by Post Malone and other celebrities), plus scores of local designers and a network of manufacturers (think Brooks running shoes), comprising a thriving fashion ecosystem. The city hosts Indiana Fashion Week and Midwest Fashion Week, both of which attract international audiences.

“The conversations that people were having were that if you wanted to do something in fashion, you have to leave Indianapolis, so we offer a platform where people can develop those skills right here,” says Denisha Ferguson, Founder & CEO of the nonprofit Indiana Fashion Foundation (IFF). “We are a bridge between fashion resources and development and the initiatives going on in Indiana.”

IFF connects creatives with economic power by providing resources and programs that take participants from drawing to selling their clothing or that act as a marketplace for their developing brands. IFF brings together the region’s rising stars for Indiana Fashion Week, and also offers internships and programming for high school students.

One of Ferguson’s strengths is connecting fashion professionals with other industries, like agriculture, tech and health care. For example, she worked within the health care space designing clothes that have a tech component designed to monitor the patient and notify the caregiver.

“One of the benefits of going this route, of learning with IFF, is you can be a bigger fish in a smaller pond,” says Ferguson. “Indiana has a lot of amazing things going on, and usually people are shocked.”

Indianapolis is the home of the Heartland International Film Festival, a 10-day event each October that showcases some of the best international and independent films in the world. Kicking off with a red-carpet gala and a screening of a Hollywood hit, the festival includes hundreds of film screenings, dozens of panels and various events with filmmakers.

“People don’t think of the film industry here, but the Heartland International Film Festival just celebrated our 30th anniversary,” says Jessica Chapman, director of marketing for the festival. “We showcase hundreds of films every year and bring filmmakers from all over the world to come be a part of this festival.”

The festival has expanded to include a very successful shorts festival and programming centered around holidays and other local events. One of the keys to its success has been the ways the festival has engaged filmgoers. During pandemic theater closures, for example, it hosted films in a drive-in setting. It also screens films in unique venues such as the Historic Artcraft Theater or the IndyFringe Theatre.

“We’re always thinking outside the box to take creative ways of making it a really fun and interactive event,” says Chapman. “We go above and beyond, and we’re well-known in the industry for taking care of our filmmakers and our audience that comes to our films — Indianapolis is known for its hospitality.”

Public art is a big deal in Indy, reflecting the cultural climate of the region. You’ll find it in public spaces and splashed on walls across the city. Current projects focus on the pandemic, local historical figures and racial justice.

And there are movements across the city’s cultural atmospheres.

GANGGANG, a first-of-its-kind cultural development firm, is igniting arts across the city by providing a platform for diverse creators and investing in cultural start-ups.  The organization focuses on equity and diversity in the arts — partners and co-founders Malina Jeffers and Alan Bacon create paid opportunities for creators with the goal of amplifying Indianapolis’ culture.

Indy Arts Council’s mission is to foster engagement in the arts by nurturing an environment where artists thrive. It advocates for community funding of the arts in order to support the city’s thriving arts scene.

“Indy Arts Council is an arts service organization that creates funding opportunities for artists and arts organizations to keep doing what they do,” says Julia Muney Moore, director of public art. “We have a gallery and a performance space and our online guide, Indy Arts Guide, lists thousands of events.”

Artsgarden hosts visual art and music, dance and theater performances, while Gallery 924 offers exhibition space. The council provides resources and opportunities for artists to find work, market and sell their own work, or meet up and make connections. It also facilitates grants for artists of all kinds.

Most importantly, Indy Arts Council integrates its projects with other important events in town, like SWISH Arts & Cultural Festival, a 2021 initiative to coincide with the NCAA Tournament. It encompassed 23 days of performances, 600 artists, artwork throughout the city, poetry and art crawls.

GANGGANG also took part in SWISH, facilitating dancers performing on city sidewalks, art and poetry installations happening all along Indy’s streets, and live performances from local musicians across the city.

“People will encounter the arts as part of their visit and daily lives in Indianapolis — we want to keep everything here intertwined with the arts,” says Muney Moore. “When you come here, you’re not just in a sports town, you’re in an arts town, too — that’s something people are always noticing.”