Skip to content
Home > IN > Indianapolis > Love Where You Live > Why I Love My City: Anthony Murdock II on Indianapolis

Why I Love My City: Anthony Murdock II on Indianapolis

One fascinating person. One great city. Ten questions about life, food, culture and the perfect Saturday. 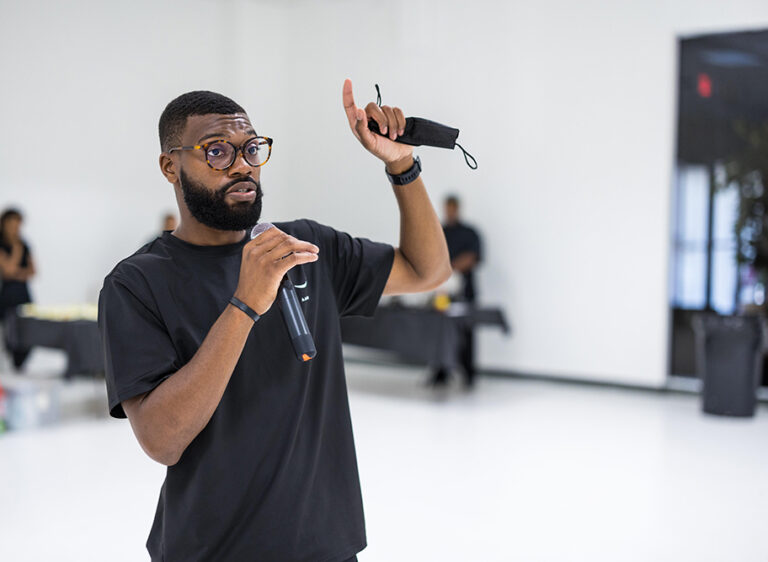 Anthony Murdock II grew up in Indianapolis and remains proud Indy resident. He just finished law school, runs an entrepreneur center called the Make It Make Sense Center, and is the founder of three not-for-profit organizations: Circle City Storytellers, Side Hustle Economy and Power Moves Only.

We asked him 10 questions about life in Indianapolis to see the city as he sees it.

Describe your city in three words.

How long have you lived here, and what brought you here?

Twenty years! I was born in South Bend, Indiana, and lived in Chicago and all around the region. I moved a lot in the first five years of my life due to my parent’s work situation. They settled on the east side of Indianapolis when I was 5 and it’s been home ever since.

Give us the itinerary for a perfect Saturday in your city.

I would start the day with breakfast at Tea’s Me Cafe, have some tea and an excellent breakfast sandwich, and then I would go to the Central Library downtown and I would go read in the Center for Black Literature and Culture. I  would go to lunch at Yaso Jamaican Grill or Cleo’s Bodega and Cafe and get a smoothie and one of their sandwiches, and then I’d take a walk at the Pogue’s Run Art and Nature Park. I’d pick up my girlfriend and take her to dinner at Kountry Kitchen, Mississippi Belle or His Place Eatery, and we would leave there and go see a movie at Kan Kan Cinema and Brasserie or go catch a show at The Cabaret.

Describe the best meal you’ve ever eaten in Indy.

The best meal I’ve had in Indianapolis was a wings special from Chicken Scratch. Oh my goodness! The honey hot wings, with fries and a side of ranch — it changed my life.

What makes you proud to live here?

The story I’ve been able to create and the stories I’ve been able to be part of. There are so many stories that people around the country don’t know about, they’re sleeping on it — our nickname is “nap town” — but we have so many stories people haven’t heard that make our city special. Circle City Storyteller’s mission is to take Black stories from across the city and put them on a stage — we don’t want people to sleep on our stories, we want to give them a voice and let them be heard.

“We’re going through a renaissance; there’s not one place or institution where that’s happening, it’s all over the city.”

There are so many, but I have a shero, not a hero. Judith Thomas, our deputy mayor of neighborhood engagement, was formerly the president of the Madam Walker Legacy Center and worked with Visit Indy as the director of convention services. She’s one of the best storytellers in the city because she’s been making sure that Indianapolis gets shared with the world. She’s unapologetically Black, and I appreciate her passion and her advocacy for the next generation of storytellers, entrepreneurs and innovators.

What does Indianapolis offer in terms of amenities/vibe/culture that makes it your best place to live?

I have a friend named Steven Russell that coined a term the “Indianapolis Renaissance” in an article that in large part gave a name to the changes happening here. There is a generation of creative entrepreneurs that are contributing to narratives, rewriting stories and creating a new identity to our city: artists, musicians, filmmakers, sculptors, painters, photographers and entrepreneurs creating spaces, especially for young Black people to have their story told and appreciated. We’re going through a renaissance; there’s not one place or institution where that’s happening, it’s all over the city.

You’ll find public art on every corner in Indy, plus lively performances, an international film festival and a thriving fashion industry.

What’s your hope for the future of your city?

My hope is that we continue to invest in our greatest asset, which is our story, to continue to find new ways to encourage creative, bold, Black ways, to leverage our greatest asset. We have an opportunity to surprise people with it. To give people a platform and create spaces that tell the stories that are the truth, to empower storytellers — who are stewards and ambassadors of our story as a city.

What advice would you give someone who’s moving to Indianapolis?

I suggest that they take some time to get their bearings on the different sides of the city and take some time to think about what kind of impact they want to make, then reverse engineer it and bring it to life by creating real relationships.

To build a real estate empire at an affordable rate. It is ridiculously expensive everywhere, but in Indianapolis, you’re able to be in a place where you can continue to buy real estate, keep buying real estate and grow a portfolio.