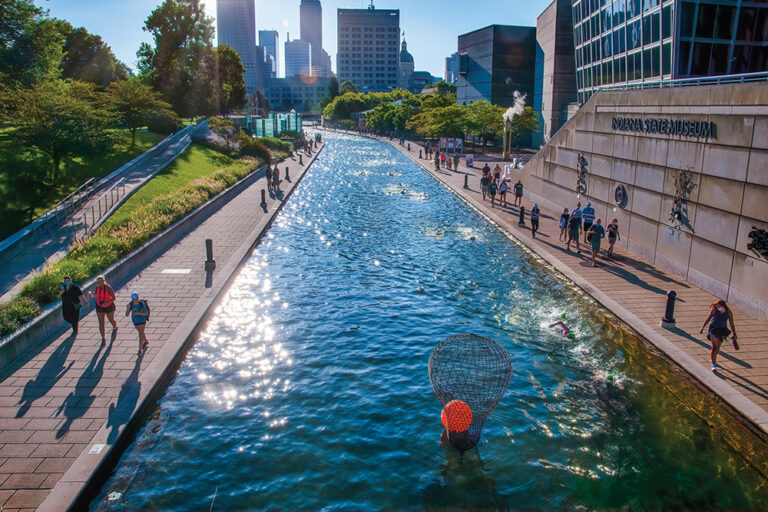 Indianapolis, Indiana — or, as the locals call it, Indy — is much more than just the home of the Indy 500. It’s an excellent place to put down roots thanks to its unparalleled affordability, its ease of getting around and a thriving economy. More and more young professionals and families alike are choosing to call Indy home. Read on to learn why Indianapolis ranks among great places to live in the U.S.

It’s the Crossroads of America.

Indy is in the middle of it all! Nicknamed the “Crossroads of America,” the city of Indianapolis sits at the junction of four major interstates and is within a 12-hour drive of nearly 75% of the nation’s population. A road trip almost anywhere in the country is doable, and flights to either coast aren’t bad, either. The I-465 beltway that encompasses the city serves as a major thoroughfare for commercial and recreational travel. The Indianapolis International Airport is just 7 miles southwest of downtown Indy and is touted as one of the best airports in the world. For 10 years in a row, it has been awarded the Airports Council International’s Airport Service Quality Award for Best Airport in North America.

One of the biggest reasons more and more people are calling Indy home is its affordability compared to other cities of its size. The fact that you can get all the benefits of living in a big city without the hefty price tag is a huge draw. With a median home price of $251,000 compared to the national average of $374,900, it’s a lot more affordable to buy a home here than in much of the U.S. According to SmartAsset, Indianapolis is ranked as one of the most affordable large cities in the country. And many of Indy’s suburbs are even more affordable, with Clermont, Fishers and Zionsville among a few great areas for families and young professionals alike. (Fishers also is one of the Top 100 Best Places To Live for 2022.)

Getting Around Is Easy.

You won’t be sitting in traffic all day here. No matter where you live in the Indy area, commute times are rarely longer than 25 minutes. The average one-way commute time is just 23.2 minutes. Many residents take advantage of IndyGo, featuring the nation’s first all-electric bus rapid transit line. The city plans to build two additional BRT lines, which will include stops at top employers and cultural destinations, increasing service by 70%. The Blue line will feature 24-hour rapid service to and from the airport.

It Promotes Diversity and Inclusivity.

Indianapolis is a diverse metro where everyone is welcomed and celebrated. The city is a leader in Asian population growth, with multiple Asian communities represented. While other Midwest cities are seeing a decline in Black populations, Indy has seen its Black population grow by 18% since 2010. The city’s events calendar is stacked with cultural festivals and events all year long, from the Indy Greek Fest and the Indian Market and Festival to inclusive events such as Indy Pride and a Juneteenth celebration.

The Economy Is Thriving.

The Indianapolis region’s biggest industries include advanced manufacturing, life sciences and agbiosciences, with an abundance of jobs and unparalleled job growth. In fact, MoneyGeek named it one of the Top 10 U.S. Cities for Job Seekers in 2021. Indiana leads manufacturing job growth in the U.S. and Indy boasts the nation’s second-largest manufacturing industry sector by overall production and gross domestic product. Indy is the nation’s second-biggest exporter in the life sciences with the second highest concentration of biopharmaceutical jobs in the country. Fortune 500 companies in the region include global pharmaceutical company Eli Lilly, Anthem health care and diesel engine manufacturer Cummins.

You Don’t Need a Car Downtown.

We established that getting around the city is easy thanks to mass transit and great infrastructure. But once you get downtown, you can ditch your car! With a walk score of 77, you can park your car and head to downtown’s many art galleries, coffee shops and restaurants. Most places in downtown Indy are only a short 5-to-9-minute walk. Want to get around even faster? Hop on a bright yellow bike from Pacers Bikeshare, which has docking stations throughout downtown and following major bike trails to the north and south.

It’s a Great Place To Raise a Family.

Indy is a very family-friendly city and two of its suburbs regularly make best-of lists. Carmel, just north of Indianapolis, scored the No. 4 spot on our list of 10 Best Cities To Raise a Family thanks to its top-rated schools and extremely safe and picturesque neighborhoods. Carmel consistently ranks as one of the country’s top 10 safest cities to raise a family, with violent crime levels three times lower than the national average. Family-friendly activities and programs are abundant here as well.

Also to the north of Indianapolis and consistently voted a Best Place To Live is Fishers. Families choose to relocate to this fast-growing suburb because of its incredible amenities, including more than 100 miles of greenways and 24 parks. Year after year, Fishers is named a Playful City by the nonprofit KaBOOM! The city is also dedicated to being walkable and has a walking and biking trail winding through downtown. Like Carmel, public schools in Fishers are top-rated, and crime is so low that it is dubbed one of the safest cities in America.

Its Culture Goes Beyond the Racetrack.

Fans around the world know Indy for its iconic racing event, the Indy 500. But there is much more to this city than the racetrack! In fact, it’s packed with arts and culture everywhere you turn. The country’s only urban state park, White River State Park, encompasses 250 scenic acres downtown, and is chock-full of cultural and recreational activities, from kayaking and walking along the river to the Indianapolis Zoo and the state-of-the-art Indiana State Museum. Sports fans can catch the Indians baseball game at Victory Field and visit the NCAA Hall of Champions, both located in the park. Beyond the park, families will enjoy the world’s largest children’s museum, The Children’s Museum of Indianapolis. Meanwhile, the Mass Ave Arts District is packed with independent theaters, local restaurants and eclectic shopping, and the Fountain Square Cultural District features a booming arts scene with working artists and live music. And, to top it off, Indy landed on our list of the Best Sports Bar Cities in America. You can’t beat that!