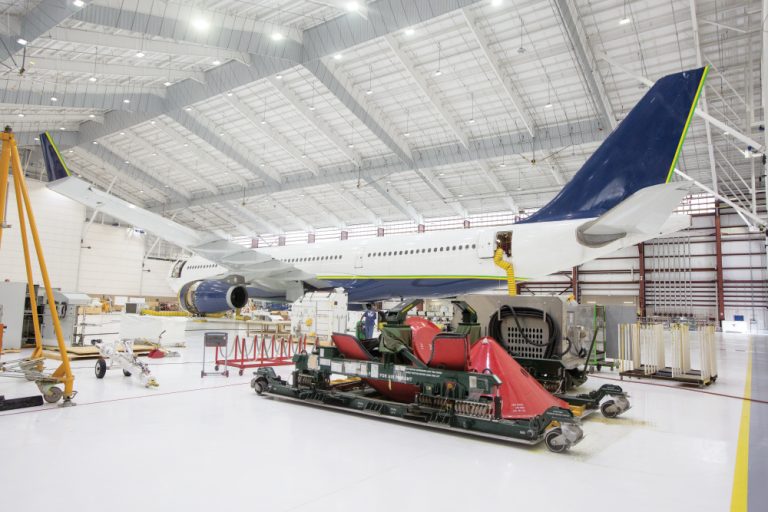 With a skilled industrial workforce and assets including Chennault International Airport and Beauregard Parish Airport, Southwest Louisiana is attracting a fast-growing aviation industry that is stimulating economic growth across the region and bringing diversity to an area heavy on oil, gas and chemical production. Lake Charles-based Chennault, which offers more than 1.2 million square feet of hangar, warehouse and office space, and a 10,700-foot runway with 17-inch thick concrete, houses operations for some of the nation’s top aviation companies. Its tenants include AAR Aircraft Services, which provides maintenance, repair and overhaul (MRO) services for the largest jet aircraft in service today, including Boeing’s 777 airliner. Northrop Grumman also operates its Lake Charles Maintenance and Modification Center at the Chennault International Airport, contributing to the nation’s security by performing services for the U.S. Air Force. The company provides preventive maintenance, modifications and upgrades for aircraft including the KC-10 Extender – the premier air-to-air refueling asset for the USAF – and the E-8C Joint STARS Surveillance, Target, Attack Radar aircraft. “The top MROs in the nation were attracted to Chennault because of the infrastructure that exists at the field,” says Randy Robb, executive director of the Chennault International Airport Authority.

Located on a former U.S. Air  Force Base, Chennault has been a leader in the region’s economy over the past 25 years, with a total economic impact of more than $6 billion. The airport’s location in Foreign Trade Zone 87 enables companies to import goods and equipment, add value to them and export the upgraded products without paying taxes unless the items are sold in the United States.

“With over 1,500 good-paying positions at the airfield, Chennault continues to have a dramatic impact on the regional economy,” Robb says. Chennault offers advantages for businesses on the airport’s grounds and beyond. Its location less than a mile from Interstate 10 and the I-210 bypass supports an effective supply chain for manufacturers. With rail-served locations available at the airport, Chennault offers a direct rail link with the Port of Lake Charles, 2.5 miles from the airport. Its rail access also extends to the rest of the country. The nation’s biggest MRO provider, global aerospace and defense contractor AAR Aircraft Services, opened Chennault’s largest hangar in June 2015. The 118,000-square-foot facility allows the company to accommodate wide-body aircraft. AAR has plans to create up to 750 new jobs.

“The new hangar was immediately occupied by two Boeing 777 wide-body aircraft,” says Danny Martinez, AAR’s vice president for technical service development. “We are currently working on several lines of Boeing 767s and Airbus A330s and have more work booked. “The biggest advantage to being located at Chennault is the excellent working relationship with the Airport Authority and the City of Lake Charles,” he continues.

“Local support goes a long way in creating a successful operation. Beyond that the area offers a skilled talent pool, good weather, proximity to Houston and a large amount of hangar space, which are all critical parts of the operation.” Northrop Grumman employs more than 800 people at its Lake Charles Maintenance and Modification Center. “The Northrop Grumman team has worked to build a strong partnership with our community partners through the city investments in community service and job opportunities for its skilled workforce,” says Marty Thompson, site director for the Lake Charles facility. “Additionally, the location of the facility in relation to Lake Charles Regional Airport has allowed for greater flexibility in scheduling test flights.”

Lake Charles Regional Airport houses a 500-acre industrial park and 32 business tenants, including two helicopter operators, ERA Helicopters and PHI, that serve oil and gas industries in the Gulf of Mexico. “We have a 6,500-foot runway – the same size as Chicago Midway – so we can handle planes up to 737s,” says Heath Allen, executive director of the Lake Charles Regional Airport. At Beauregard Parish Airport, a new 1,400-acre industrial park, as well as aviation services at the airport, are strengthening the economy and enhancing public safety. With more than 5,000 acres, the airport offers locations for disaster relief staging and distribution.

“Being 100 miles from the coast, we are a suitable hurricane evacuation site for first responders’ aircraft and other support equipment,” says Bobby Hennigan, Beauregard Parish administrator. At 5,495 feet, the runway is the second longest in the area. The airport houses business jets as well as charter aircraft, and its location along U.S. Highway 190 and near one of the world’s largest aquifers offers significant advantages for its industrial park tenants. “The airport’s sales taxes collected support local and state revenue streams, and visitors to the area through the airport spend money for food, hotel, car rentals and more,” Hennigan says. “Corporate officials and other business people are able to visit clients, businesses and manufacturing locations in the area.”