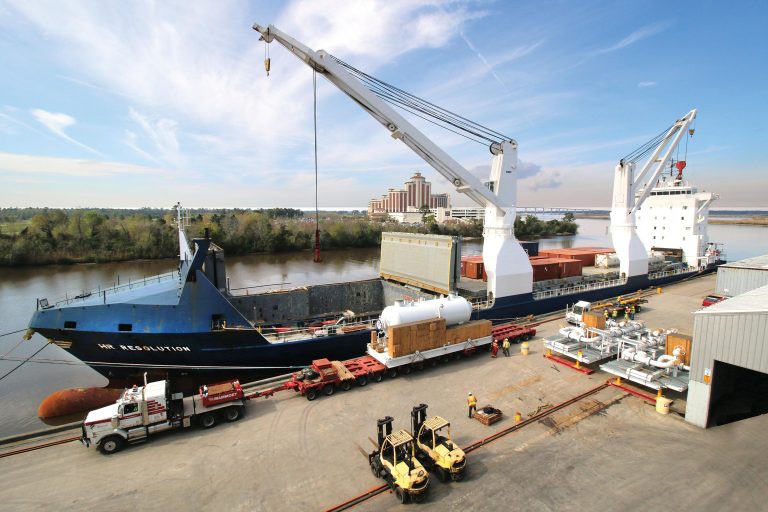 Situated along the busy Interstate 10 corridor and just two hours from Houston, Southwest Louisiana is in a prime spot for commerce.

I-10 passes through Lake Charles and connects the region with Houston to the west and New Orleans to the east. Other major highways in the region include I-210 and U.S. Highways 90, 165, 171 and 190.

Southwest Louisiana is also a major rail center served by Class I carriers Union Pacific and BNSF. Rail service is a key feature at facilities like the Port of Lake Charles and Chennault International Airport. In addition, the South Louisiana Rail Facility in Lacassine Industrial Park near I-10 was built for the efficient loading of rice for rail shipment solely to Mexico by UP and BNSF.

Anchoring the region’s transportation and distribution infrastructure are a half dozen river ports, the largest of which is the deepwater Port of Lake Charles. The Port of Lake Charles is on the Calcasieu River and governs the 68-mile Calcasieu Ship Channel that runs 36 miles inland and also extends 32 miles out into the Gulf of Mexico.

About 46 percent of the Lake Charles metropolitan area economy depends on the Calcasieu Ship Channel users and dependent industries, which underscores how important the port industry is, says Bill Rase, Port of Lake Charles executive director.

The port released a study in 2015 that showed that the channel generates more than $5.7 billion in revenue for the local economy and accounts for 31 percent of Southwest Louisiana’s employment. As for the Port of Lake Charles itself, cargo shipping there has diversified greatly in recent years, transforming from primarily handling agricultural goods to now moving aluminum, lumber, steel, petroleum coke and other petroleum products, minerals like barite and rutile, and project cargo.

“Regarding project cargo, big companies are investing around $135 billion in capital expenditures in this region, and many of the parts and equipment for constructing their plant projects are shipped by barge through the Port of Lake Charles,” Rase says. “As a result, our port handles about 15 to 20 project cargo ships a year that are all brand new business to us.”

Also experiencing success along the Calcasieu Ship Channel is Cameron Parish, which is quickly making an economic name for itself by attracting several companies involved in the liquefied natural gas (LNG) industry. LNG is seen as a cleaner energy alternative than coal for fueling power plants; for example, in 2017 Entergy Louisiana announced it will build a Lake Charles Power Station that runs on LNG.

“We are looking at about $35 billion in overall capital expenditure from companies wanting to do business here, and many are involved with LNG,” says Clair Hebert Marceaux, director of the Cameron Parish Port, Harbor & Terminal District. “We can handle many barges and provide easy access to the Gulf of Mexico.”

One of the liquefied natural gas companies looking to do business in Cameron Parish is G2 LNG, which is constructing an $11 billion LNG export facility that will open in 2020. Other LNG energy firms that are investing include Cameron LNG as well as Cheniere Energy, a Houston-based company.

“Our port location is also ideal for a highly successful shrimp and crab fishing industry that is a huge asset to Cameron Parish,” Marceaux says. “Our small rural area supplies shrimp, red snapper, crabs and oysters to customers around the nation.”

Marceaux is also hopeful that the upcoming boom in the LNG industry and other companies attracted to the region could result in an increase of population in Cameron Parish.

“We only have 6,800 residents in our entire parish, and about 3,500 people make up our workforce,” she says. “We would gladly welcome more hard-working people to Cameron Parish and the region.”