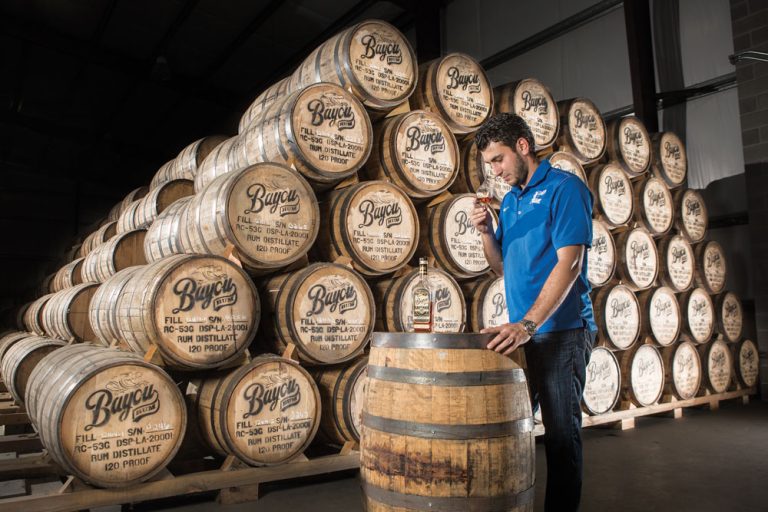 Made Here Shop of Honors

Southwest Louisiana’s energy sector and diverse manufacturing base have helped build high-quality machining and fabrication companies. One of them, Howell Industries in Calcasieu Parish, won a Lantern Award from Louisiana Economic Development in 2016. The award is given to companies that demonstrate excellence in manufacturing and contributions to their communities, including investments in employment growth and facility expansion. Howell Industries, founded in 1965, is housed in an 82,000-square-foot facility in Sulphur that includes 11 overhead cranes. The company is a full-service machine shop and custom fabricator with a range of capabilities, including Computer Numerically Controlled (CNC) milling and lathes. A major part of its business is in repair of rotating equipment, such as pumps, turbines and gear boxes.

The Southwest Louisiana region is casting its net for seafood production. In Cameron Parish, home to one of the nation’s largest commercial fishing ports, a $4.7 million facility to support commercial fishing made its debut in 2015. The facility is designed to work with commercial fishermen, providing them the right equipment to handle product and process any type of seafood. The facility is a public-private joint venture involving local land owners, Cameron Fisheries Inc., the West Cameron Port Commission and the Cameron Parish Police Jury. Cameron Fisheries Inc. will lease the building that includes a new dock, processing facility and ice house. The project is part of an effort to rebuild critical commercial fisheries infrastructure initially damaged by Hurricane Rita in 2005, and improve seafood quality and pricing. The West Cameron Port Commission operates the eighth-largest commercial fishing port, by volume, in the U.S.. The port is home to hundreds of fishing vessels harvesting wild caught shrimp, crabs and oyster and several types of freshwater and saltwater commercial finfish.

Visitors can get into the spirit of Southwest Louisiana in a number of ways, including taking a tour of one of its most popular attractions. Louisiana Spirits draws thousands of tourists each year to its $8 million Bayou Rum distillery in Lacassine in Jefferson Davis Parish, where its rums are handmade in what is billed as the largest privately-owned rum distillery in the U.S. The distillery’s family of rums – which include Bayou Select, Satsuma, Silver and Spiced – are made from unrefined cane sugar and molasses, with sugar cane harvested from Louisiana fields. The distillery uses traditional methods blended with state-of-the-art technology for all four steps in the process: fermentation, distillation, maturation and bottling. The 18,000-square-foot distillery, which opened in 2013, features a gallery celebrating the state’s historic role as a sugar cane producer and rum distiller, a tasting area, a farm house dating to 1903 that was saved and moved to the site, and a gift shop.

A Lake Charles company is making noise around the world – specifically noises designed to attract ducks, geese, teal, quail, pheasants, turkey, deer, elk and a variety of other animals. Faulk’s Game Calls, whose roots date to a line of calls crafted by Dud Faulk in 1951, produces a variety of calls using select woods and other materials. Its calls are hand tuned and individually tested for the authentic tones favored by sportsmen. The company also offers CDs to help hunters fine-tune their calling techniques. Faulk’s calls are sold in outdoor retailers including Cabela’s, Big Sporting Goods, Lafayette Shooters and Scheels.

Things to Do Celebration Destination

Southwest Louisiana has plenty to celebrate when it comes to music, food and culture, and it has no shortage of festivals that showcase what makes the region distinctive. A staple of the region’s entertainment offerings is the Cajun Food & Music Festival, presented by the Lake Charles Chapter of the Cajun French Music Association. The event, which celebrates its 30th year in 2017, aims to preserve Cajun traditions and heritage through music, dancing and food, including jambalaya, gumbo and cracklins. Music is a key part of the Marshland Festival, but the event also serves as a business expo, arts and craft show, and food festival. Held at the Lake Charles Civic Center, the festival raises funds for 15 schools, churches and community organizations in the region. Contraband Days Louisiana Pirate Festival, one of the largest festivals in the state, celebrates the legend of pirate Jean Lafitte. The two-week spring festival features carnival rides, games, entertainment and live music on multiple stages.

Southwest Louisiana doesn’t take a back seat to anyone on Mardi Gras. Parades, Zydeco dancing and a gumbo cookoff are just a few of the attractions that make Fat Tuesday in Lake Charles the largest Mardi Gras event in the U.S., outside of New Orleans.