Southwest Louisiana is Making a Splash 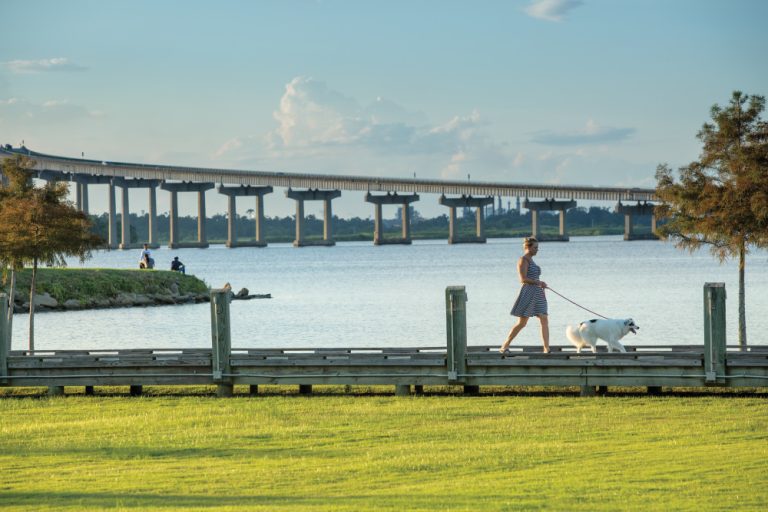 According to Louisiana legend, the famed pirate Jean Lafitte sailed straight up the Calcasieu River approximately 200 years ago to the shores of Lake Charles, where he hid some of his ill-gotten riches. But the true treasure of Southwest Louisiana is not buried along the banks. Rather, it is the water itself, which permeates throughout the region, turning the area into an aqueous playground for outdoor enthusiasts.

Water is the common denominator throughout many of the parks and wildlife refuges in Southwest Louisiana. The 1,087-acre Sam Houston Jones State Park has two boat launches that provide easy access to fishing and water recreation. A trio of trails leads hikers past tree-filled lagoons and various tributaries that jut off from the Calcasieu River. This lush landscape attracts nearly 200 species of birds, making the park extremely popular among bird watchers.

Prien Lake Park in Lake Charles, overlooking Indian Bay, has multiple water-access points throughout its 18 acres for both boats and kayaks, as well as several hiking trails. The park sits on the eastern edge of Prien Lake, providing spectacular views of the sunset over the water.

In the nearby city of Hayes, Lorrain Park sits at the foot of the wooden Lorrain Bridge, which originally was built in 1895. Birds and ducks flock to the park, making it another popular location for bird watchers.

“There are tons of different species there, and a lot of them are in the cypress trees right off the water,” Carter says. “And we’ve built duck boxes at the park so ducks can come in and feed, and people can easily see them.”

You don’t actually have to be on or in the water to enjoy it. For a sampling off all the wildlife in the area, drive along the 180-mile Creole Nature Trail All-American Road, which runs through Cameron Parish. This scenic passageway – which has been dubbed the Louisiana Outback – passes through the Sabine National Wildlife Refuge, the Rockefeller Wildlife Refuge and the Cameron Prairie National Wildlife Refuge. In addition to more than 400 bird species, the marshlands along the Creole Nature Trail are teeming with critters, including alligators, red wolves and Peregrine falcons.

For those who want to stay in one place, the Lakefront Promenade in Lake Charles is a popular gathering spot, with a children’s park that features a climbing wall. The Promenade is the site of numerous events throughout the year, led by the annual Contraband Days Pirate Festival each spring.

“Pirates take over the city for two weeks,” Carter says. “It’s a big festival that is really based entirely around water.”

The shore of the fresh water lake is the only white sand inland beach on the Gulf Coast. A boardwalk that stretches the length of the lakefront connects the beach to a series of waterfront parks, including Millennium Park, the Veteran’s Memorial Park and the 9/11 Memorial.

Southwest Louisiana also is the site of several major fishing tournaments each year that attract anglers from throughout the southeastern United States. Boaters and kayakers will take to the water in many of those events, but Carter says prime fishing can also occur from the comfort of the shore.

“We want to appeal to people who may not have a boat or have means to get out into the water, so a lot of our parks offer bank fishing,” Carter says. “We have had some of our biggest fish in their categories caught right off the bank from wharfs and fishing piers. That way, the grandparents can bring their grandchildren out to catch their first fish and capture that special moment. We just have so much water in Southwest Louisiana, and we want everybody to be able to enjoy it.”