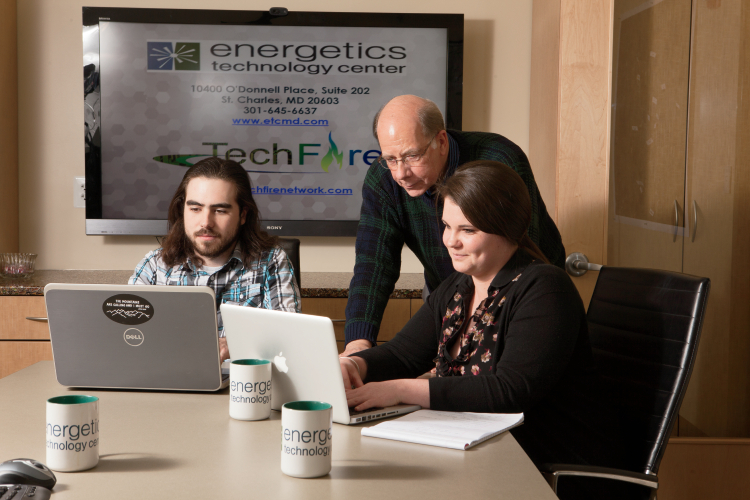 TechFire, a new Charles County technology business incubator that was launched in 2013 by the Energetics Technology Center, has a three-pronged approach to helping entrepreneurs and upstarts in the region.

“It really is about mentoring young technology businesses in three areas,” says Keith Gordon, director of TechFire. “The first area is to help with their technology product, prototype or invention. The second area would be to help them understand their market, their customer base and their potential to gain an edge in other markets or with other products.

“The third area is to get their back-office business structures set up properly for their future. That could include anything from accounting to human resources, from finance to legal help – really anything that a young business might need.”

Charles County and the surrounding area are filled with young businesses seeking roads to success, and to have a program such as TechFire is a win-win. The success of startups equates to a sounder region, says Kwasi Holman, director of Charles County Economic Development.

“When I ran economic development in Prince George’s County,” he says, “one of our most important programs was to have a business incubator where we could grow our own companies. I felt those companies in particular would be very loyal to the county since we provided services to them. They were more likely to stay in the county over a longer period of time and be productive in the county economic system. So the idea of TechFire was very appealing from the start.”

It was an idea that spun off ETC, a nonprofit scientific research organization that provides research, analyses, technology developments and engineering services to government, academia and private industry.

Southern Maryland didn’t really have a business incubator focused on technology, and yet the region is rife with tech-minded entrepreneurs.

“We also thought if we could create an innovation network, we may be able to inspire some of these young technologists or patent holders to create businesses that could anchor into our region and both sustain their own growth and help with the economic development of the area.”

TechFire has an impressive team that is tailored to helping its clients. Gordon is a recently retired Naval aviator who was already working as director of ETC’s Strategy, Innovation and Business Development. Robert Kavetsky, ETC president, worked in science, technology and engineering development for 32 years in the Department of the Navy.

Consultants include Ann Lansinger, president of Lansinger & Associates LLC, an entrepreneurial and incubation consulting firm; Shirley Collier, president of techGrowth Inc.; and Gene Lauer, who has more than 35 years of experience in local government.

“They have a good team and good approach,” Holman says, “and also a good understanding of what was needed to not only run an incubator but also to create long-term prospects to increase revenue for the county.”