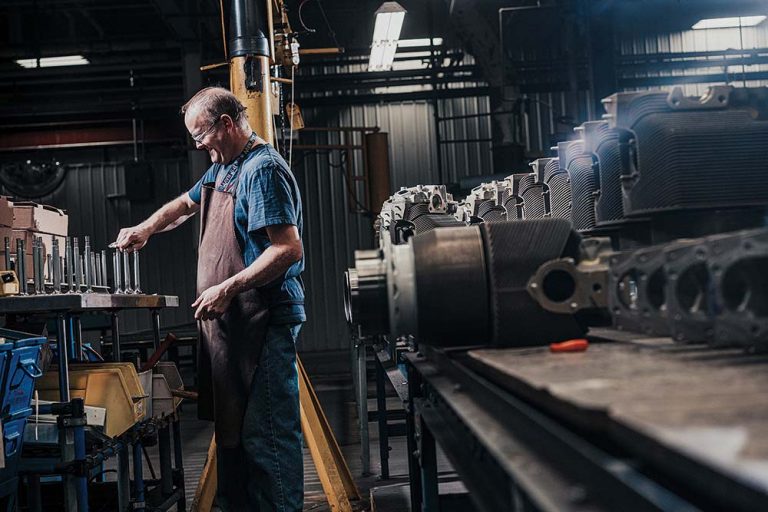 Protecting our country’s freedom is not something RENK America takes lightly.

In fact, it serves as the primary mission of the Muskegon, Michigan-based manufacturing plant.

RENK America, formerly known as L3Harris and now part of the Germany-based RENK Group, has more than 3,000 employees worldwide, with roughly 400 of them located in Muskegon, many of them veterans.

While the Muskegon manufacturing plant has a long and proud history in the area, its plans for the near future are completely modern.

The company plans to make use of its existing 1.2 million-square-foot space not only to manufacture and develop new products, but also to create new jobs in the region and reinvest in Muskegon.

Ted Trzesniowski, CEO of RENK America, worked with L3Harris for 14 years before the company changed hands last year. He’s thrilled that RENK’s focus on technology will allow them to continue to fabricate the dependable products they’re known for combined with increased functionality — to directly benefit American soldiers.

For RENK employees, the mission of building and maintaining equipment that will keep warfighters safe is at the forefront of everything they do.

“My son is a medic in the Army, and I’m really proud of that,” says Maggie Johnson, a quality inspector at RENK. “While he’s serving our country, I have the chance to serve them.”

RENK America is already finding ways to engage the local community, from sponsoring the beloved annual Parties in the Park series to sponsoring the FIRST Robotics Competition for Muskegon area robotics students.

The company also supports several local veterans’ organizations, something near and dear to the team’s heart — long one of the company’s core values. RENK makes it a priority to employ veterans; over 50 of the Muskegon-based facility staff have served in some capacity with the Armed Forces.

“With my team, we’re delivering quality products and making sure soldiers are able to go home and see their loved ones because of what we do every day,” says Chase Kloka, warehousing and logistics manager.

Support for those who served is strong in these cities

And RENK is hiring; there are several open positions across various departments at the company. The new owners’ investment means the development of new technologies and products along with the creation of jobs and partnerships in the local community.

The company prides itself on having a work environment that feels more like family, despite the company’s size and, above all, being a business whose pride and purpose reside in serving the country and the community.