Muskegon Lakeshore Invites You to Take a Seat and Bon Appétit

Enjoy lots of great food, from new to tried-and-true. 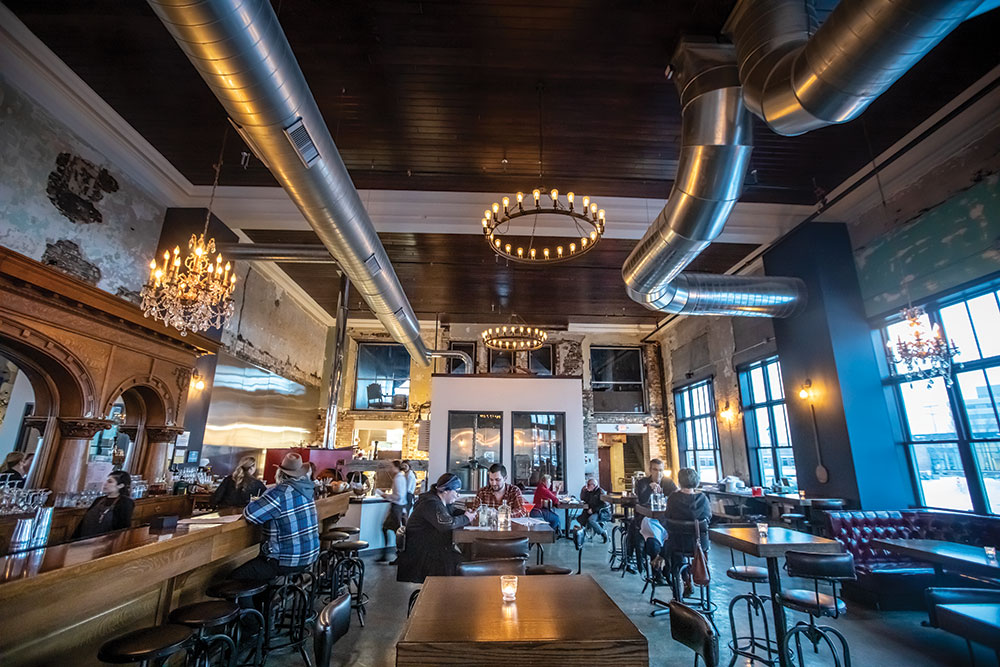 With many long-established favorites, along with several new places and menus to explore, Muskegon’s growing cuisine scene leaves few cravings unmet. All one needs is a sense of adventure and an appetite.

Although it didn’t officially open until2019, Dr. Rolf’s Barbeque was in the works for several years. Dr. Rolf Hissom, a physician at Mercy Health, has long had a passion for cooking, and his wife, Judy, says barbecue has always been his specialty – so special that it’s been a much-loved fixture at local community and sporting events for years.

The Hissoms decided to pursue opening a restaurant in downtown Muskegon after the last of their five children graduated from high school, and now, locals have near-daily access to Dr. Rolf’s famous barbecue, along with other smoked meats and several tasty sides, all created using recipes inspired by Dr. Rolf’s West Virginia upbringing. 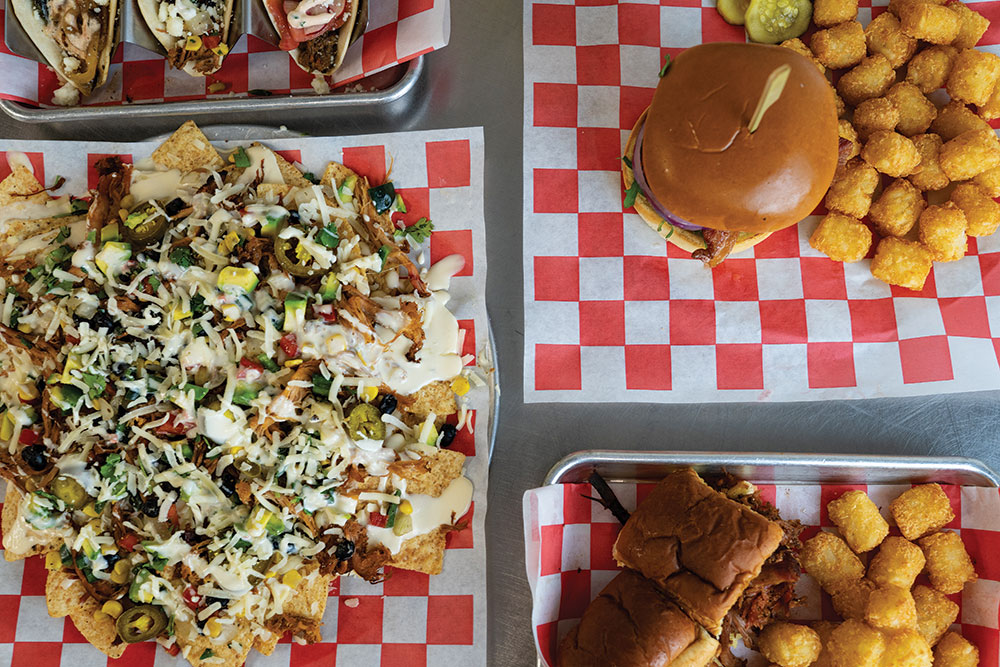 “Rolf loves cooking and feeding people, and we’ve been told we should open a restaurant for as long as I can remember,â€ says Judy Hissom, who currently manages the restaurant. “We’re so excited to be open and serving dishes you’d have found on Rolf’s table when he was growing up, including our chili that was recently named the best in the state by MLive.com (Michigan’s largest local news website). Plus, we love being part of the excitement in downtown Muskegon with its events and festivals and all of the visitors who come through.”

Also new to Muskegon is RAD DADS’ Tacos and Tequila Bar, a casual downtown dining spot that opened inside the 4,000-seat Mercy Health Arena in 2018. RAD DADS’, owned by business partners Greg Chase and Matt Gongalski, offers what Chase calls “surf-and-turf, Californiastyle tacos,â€ all of which have creative names inspired by pop culture trends from the era that helped influence the restaurant’s name, decor and overall concept. 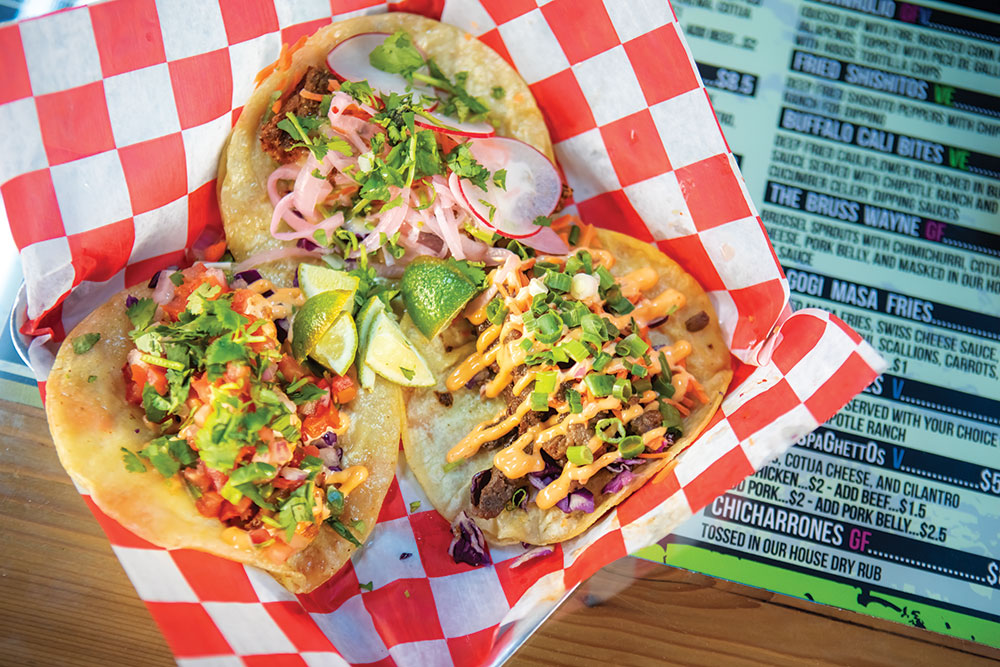 “RAD DADS’ has a late ‘ 80s, early ’90s feel, and nothing like it has ever been in the arena before,â€ says Chase, who is also partnering with Gongalski to open Cool Kids ice cream and frozen yogurt shop in the arena.

“When you’re in our restaurant, you can watch the Muskegon Lumberjacks play hockey and see just about everything going on in the arena. We think that’s pretty cool and definitely sets us apart.”

Looking for historic atmosphere to take in an innovative cocktail? Head to 18th Amendment Spirits Co., a distillery inside a beautifully renovated building that was originally Muskegon Savings and Loan. New on the craft cocktail scene is Burl & Sprig, situated in a contemporary, cozy space in the back of downtown Muskegon’s historic Noble Building (which also houses the popular Pigeon Hill Brewing). And speaking of beer, other breweries include Unruly Brewing Company and the new Rake Beer Project, both in downtown Muskegon; and Fetch Brewing Co. in Whitehall. 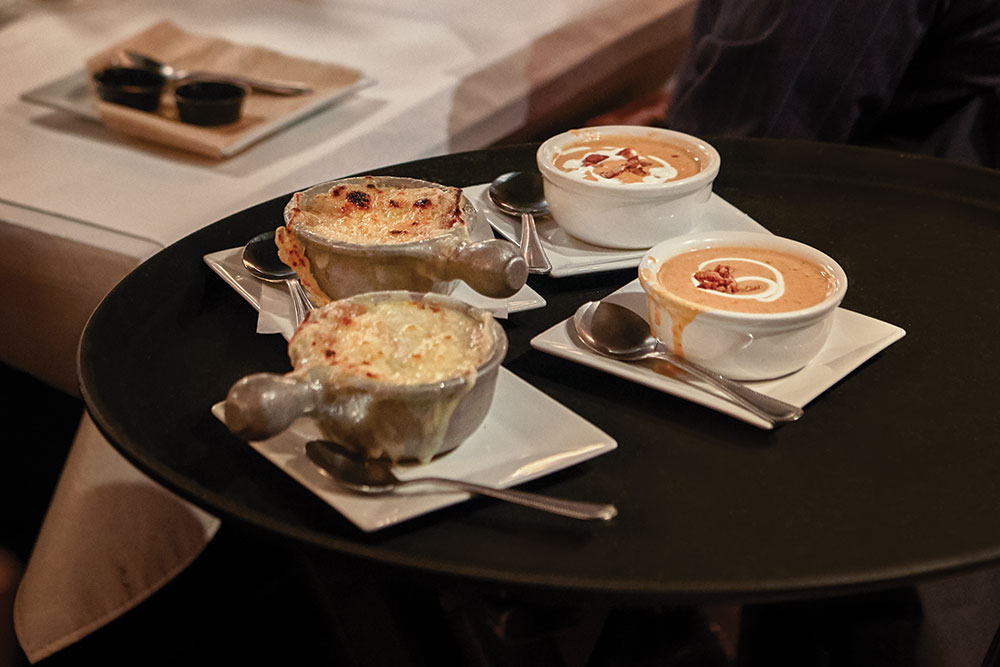 For tried-and-true Muskegon fare, check out The Station Grill, modeled after a 1940s service station and one of the community’s most popular burger restaurants. In recent years, its menu has expanded to include Tex- Mex dishes, like burritos and nachos, along with a variety of sandwiches, wraps and salads.

“My late father, Charlie, opened The Station Grill in 1972,â€ says Muskegon native Chris Meyers. “After my younger brother was born, Dad wanted a good burger and a beer, but couldn’t find what he was looking for, so he decided to do it himself. I’m honored to have taken over the family business and to continue growing what my father started.”

Another community favorite is Hearthstone Bistro, a lunch and dinner destination that’s been a Muskegon staple since 1975. The restaurant’s eclectic menu features European bistro classics, including escargots de Bourgogne, croque monsieur and steak frites, as well as contemporary American dishes like burgers, pork chops and macaroni and cheese.

Open since 1939, US 31 Bar-B-Q draws diners looking for classic American food with a side of nostalgia. The family-owned downtown Muskegon eatery is best known for its made-to-order barbecue pork, beef and ham sandwiches, all topped with a signature relish, but US 31 Bar-B-Q is also a top spot for desserts, with shakes, floats and sundaes on the menu.

The Muskegon Lakeshore region has scores of excellent eateries. Here are seven more among many popular spots to check out.

The Sweet Spot is a student-run retail and coffee shop is part of the baking and pastry program at the Culinary Institute of Michigan. Choose from a selection of fresh pastries, breads and confections that changes daily. Pair with coffee or tea.

Claiming the best breakfast and lunch in the Muskegon area, Toast ‘N Jams is a Norton Shores hot spot with a colorful, classic diner vibe complete with a Route 66 mural. Arrive early (the secret’s out on this one) and enjoy the homemade jam and so much more.

Brunch House is a  new spot coming from the same family that owns Mr. B’s Pancake House. Expect modern menu items with a nod to traditional tastes, meaning you can get kombucha on tap with a power grain bowl, but there are biscuits and gravy if you prefer!

Known for being fast and fresh, Hamburger Mikey on Third Street is owned by Mike and Mary Jane Burling. It’s quickly become a must-do for juicy burgers and big servings of delicious fries – the latter served in a brown paper bag.