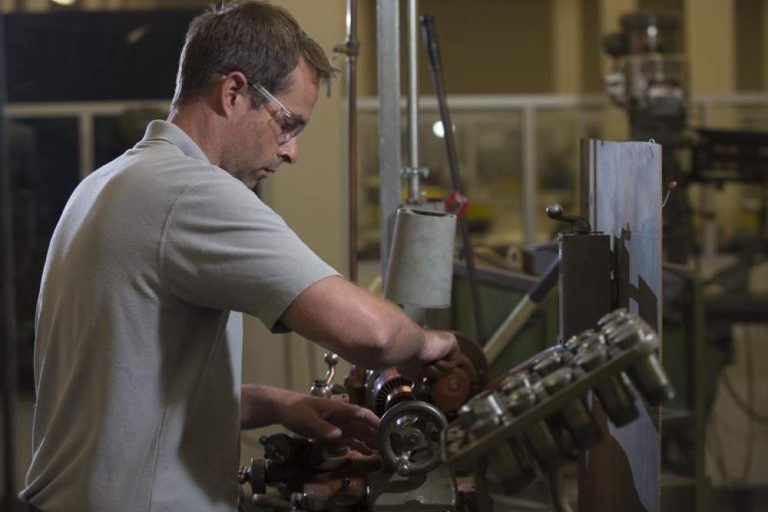 It’s been more than a century since humankind defied gravity and learned to fly. The Carolinas, and the more than 130 aerospace suppliers that call Charlotte USA home, have used that time wisely.

Altogether, companies in the sector employ nearly 20,000 workers in specialties ranging from avionics and engine systems to interior assemblies and control systems, as well as maintenance, repair and overhaul.

For companies like Midway Aircraft Instrument Corp., there simply is no place they’d rather be than Charlotte USA. The company, which provides repair, overhaul and scheduled maintenance services for a range of aircraft, opened a new facility in Monroe in Union County, N.C., in 2013.

The company, which plans to create 36 jobs and invest $2.3 million over three years in Monroe, was attracted by the region’s low cost of doing business and the opportunity to reach new markets, Bacola says.

“Our decision to relocate to Monroe is due to the favorable business economics, the international airport in nearby Charlotte and the opportunities presented by the growing aviation community there,” says Terry Bacola, Midway Aircraft president.

From its headquarters in Monroe, Cyril Bath provides cutting-edge metal forming and joining solutions for the aerospace industry. Customers include aircraft companies as well as manufacturers of turbine engines. The company, a Boeing supplier, is part of an international corporation and has been in business since 1918.

Midway and Cyril Bath enjoy synergy with other nearby aerospace suppliers. Monroe, in Union County, has the most intensely concentrated group of aerospace firms in the Carolinas. The central portion of the county has developed a strong base in advanced manufacturing and has 19 aerospace companies in a 7-mile radius.

Those companies benefit from the presence of the Center for Technology and Health Education (CTHE) at South Piedmont Community College, where students train for the jobs of the future. The CTHE consolidated classes such as industrial maintenance and mechatronics that were previously taught at the college’s Aerospace and Advanced Manufacturing Training Center.

“Through effective partnerships with local industries as well as collaborating with industries in the region, our Center for Technology and Health Education is able to customize training to meet the needs of the industries in our service area. SPCC understands that technology and developing a highly skilled workforce is the mission of our advanced manufacturing programs,” says Dan Merle, South Piedmont’s vice president for career development and continuing education.

Training provided by CTHE benefits businesses, their future employees and the region, he says.

“The career training and skill sets obtained through classes offered at CTHE provide one with the necessary tools to earn a lucrative salary and professional development in the highly competitive advanced manufacturing sector of the 21st century,” Merle says.

The center represents an investment of $3.5 million so far and is growing. When work is complete, approximately 75,000 square feet of space will be available for training programs, says John DeVitto, South Piedmont Community College’s executive vice president.

The company is discovering other markets for its products. The same attributes that make composite materials so attractive to aerospace companies are also drawing attention from customers who are in the business of repairing the nation’s bridges, pipelines and other critical infrastructure elements.

The company’s location in the heart of the Carolinas’ aerospace cluster helped open its eyes to new opportunities. Long before it discovered aerospace, though, Schneider recognized the advantages of calling Alexander County home.

The company has 300 employees who form an “extremely loyal” workforce who are responsible for the company’s success and deeply involved in the community, Shtohryn says.

“It’s like an extended family in the building,” he says.

Read more about aerospace and aviation in Charlotte USA.