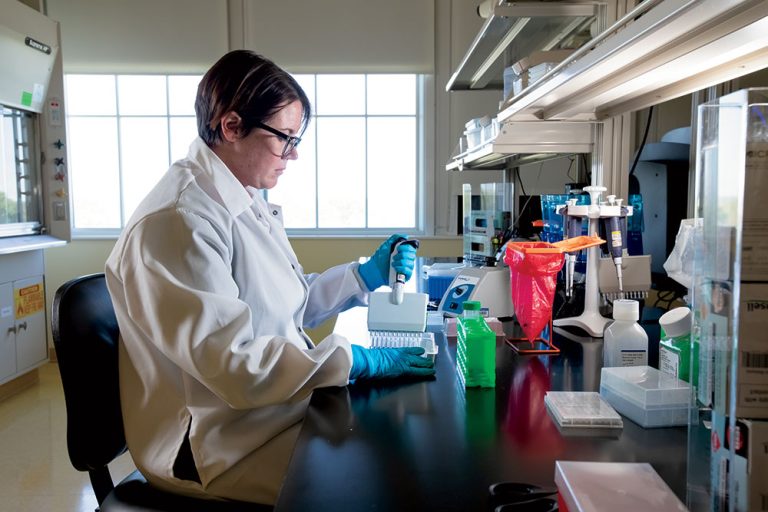 In 2010, Dan Roselli had a vision for the future of Charlotte.

“We had this hypothesis that if we created a physical hub for entrepreneurship it would allow the entrepreneurial community to interact and result in a really strong, vibrant, interconnected community,â€ Roselli says.

So Roselli and his wife, Sara, bought an “85 percent emptyâ€ office building in the city’s downtown and transformed it into Packard Place, an entrepreneurship hub that helps local entrepreneurs by connecting them to mentors and other resources.

“Our alumni have raised almost $1 billion in venture capital and created 550 local jobs. There have been almost 2,000 different entrepreneurial meetups and events, all of which has had a transformative effect on Charlotte USA,â€ says Roselli.

Packard Place – which includes RevTech Labs, a place for tech startups to launch – doesn’t exist in a vacuum in the region’s entrepreneurial ecosystem.

Another key part of that ecosystem is Ventureprise, an incubator/accelerator located at the Charlotte Research Institute’s Partnership, Outreach and Research to Accelerate Learning (PORTAL) building on the campus of the University of North Carolina at Charlotte.

Ventureprise is home to dozens of companies, including Virtual Strongbox, a startup that facilitates the secure collection, storage and exchange of information for the financial services industry.

“We are the translator between the consumer and their digital devices and the banks and their legacy technology,â€ says president and CEO Ron Daly, who notes that two of the many benefits of being associated with Ventureprise are the networking opportunities and access to young talent.

“Being on campus with 27,000 students, we’ve had interns from the university and a couple of graduates work for us. There’s a great talent pool of millennials right outside my window,â€ he says.

Meanwhile, a planned urban development called Knowledge Park aims to transform Rock Hill, S.C. by creating a home for knowledge economy businesses and jobs, with the Technology Incubator at Knowledge Park to play a key role in the formation and development of local tech companies.

Information technology is already a regional strength and its fastest-growing sector according to a 2017 study by demographer Joel Kotkin. The study found that tech businesses in the region expanded their job count by 62 percent, with 18 percent growth from 2014 to 2016, the fastest in the nation.

This development complements the area’s health industry, which features more than two dozen bioscience companies, including Countervail Corp. (another Ventureprise company), which develops antidotes to organophosphate nerve agents and organophosphate pesticides and are intended to protect both U.S. military personnel and civilians.

“In addition we are developing a diagnostic test to detect and quantitate exposure to organophosphate compounds,â€ says G. William Basigner Jr., Countervail’s president and CEO. “The purpose of the test is to show that exposure has occurred and if it did occur, how much exposure occurred, to better guide triage and patient therapy for emergency care physicians.â€

Basinger says that being a part of Ventureprise has been invaluable for networking and collaboration. Charlotte has an exceptionally good locale to develop the company, he says, because “the biotech industry is blossoming and because the city is becoming a more and more desirable place to live.â€

Yet another of Charlotte USA’s advantages are its considerable research assets, including the North Carolina Research Campus (NCRC) in Kannapolis. NCRC was originally established as a partnership between business executive and philanthropist David Murdock and the state of North Carolina to develop a campus dedicated to improving human health.

First envisioned by food industry pioneer Murdock, the NCRC campus was developed on the site of a former textile complex, with Murdock investing $1.5 billion to help make it a reality. The NCRC now includes more than 1 million square feet of state-of-the-art lab and office space where universities, government agencies and private enterprises are advancing scientific knowledge about how plants, fruits, vegetables and nutrition link to disease and good health.

Among the dozens of on-campus partners is the David H. Murdock Research Institute (DHMRI), a private, not-for-profit organization that supports the research of academic, industry and government partners, and also conducts its own independent research in health and nutrition.

“We have done research in a really broad series of areas that range from human disease all the way to studying the genomics of fruits and vegetables and everything in between,â€ says Steven Colman, COO of DHMRI. “It’s a unique campus in that we have seven members of the UNC system plus Duke University represented here, as well as the Dole Nutrition Institute and a local dermatological company, EnDev Laboratories, among many others.”

The DHMRI and the North Carolina Research Campus are emblematic of the evolution of Kannapolis and the Charlotte region overall, which has become an innovative, high-tech community.

“It’s been a tremendous transformation for a community that was a textile town for decades and is now changing into a high-tech health and nutrition site,â€ Colman says.