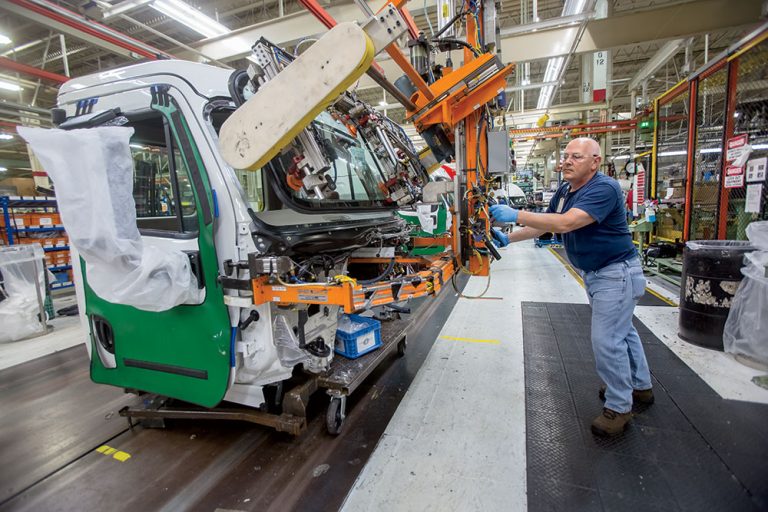 Advantages for manufacturers include abundant and affordable power and water, a geographic location and distribution infrastructure that make importing and exporting components and products effective and affordable, as well as ample shovel-ready sites, parks and buildings.

Manufacturing fuels the region’s exports, with the top-product categories of transportation equipment, machinery and chemicals totaling $11.9 billion in 2016.

Manufacturers continue to invest throughout the region. New York Air Brake announced in 2018 it will invest $9 million to expand its Rowan County operations and create 100 new jobs to produce freight and locomotive air brake control systems.

Investment from foreign-owned companies is driving growth in the sector, too. Yokohama Tire Corp., a subsidiary of Tokyo-based Yokohama Rubber Co., will open a research and development facility in Mecklenburg County, N.C., a nearly $5.9 million investment that will create 56 jobs. And Kurz, a hot stamping and coating technology company based in Germany, will build an $18 million North American headquarters in Huntersville and hire for 90 new positions by 2022.

Gaston County, N.C., boasts a 100-year history in manufacturing. Once known as “the yarn-spinning capital of the worldâ€ for its thriving textile industry, the county suffered manufacturing losses as textile production moved off shore.

Local officials embarked upon a massive diversification effort to retrain the workforce for new advanced manufacturers.

“We also built a number of business parks and invested heavily in infrastructure, and we began targeting foreign companies to establish operations here,â€ says Donny Hicks, executive director of the Gaston County Economic Development Commission. “Today, that has resulted in a long line of international investment in manufacturing.â€

In March 2018, Metyx Group from Turkey announced a $12.6 million investment to manufacture textiles for marine, road and rail transportation applications.

The Center for Advanced Manufacturing was constructed at Gaston College to support the industry’s growth.

“The center is training a whole new level of workers in these technical jobs that are being created,â€ Hicks says. “In addition, the center is also updating training for people already employed who need to learn new machines, processes and equipment.â€

In York County, S.C., advanced manufacturing plays a major role in the economy.

“Manufacturing means employment for nearly 12,000 people representing 11 percent of the county’s workforce, with an average wage that is over $59,000 per year,â€ Swenson says. “Goods made in York County represent $1.8 billion of our $9.4 billion annual economy.â€