Family-friendly in Sin City? We promise this isn't a joke! 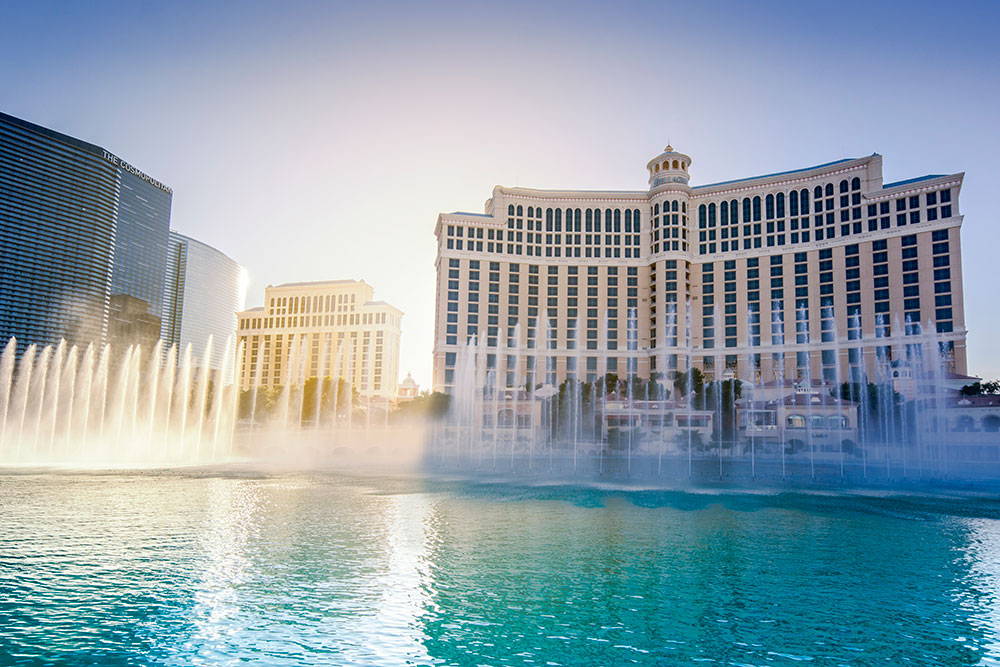 Welcome to Go There, a Livability.com series about travel and how to maximize your time in some of our favorite cities. Do you have a place in mind that we should visit next? Let us know! Today, we’re sharing our weekend getaway guide to Las Vegas, NV.

Las Vegas, whose reputation is for gambling, showgirls, and activity 24/7 precedes it, has a softer side. Surprisingly, though, there are any number of things that can keep a family entertained for a long weekend, from light shows to ziplining, which is one reason Livability named it a Top 100 Best Place to Live. 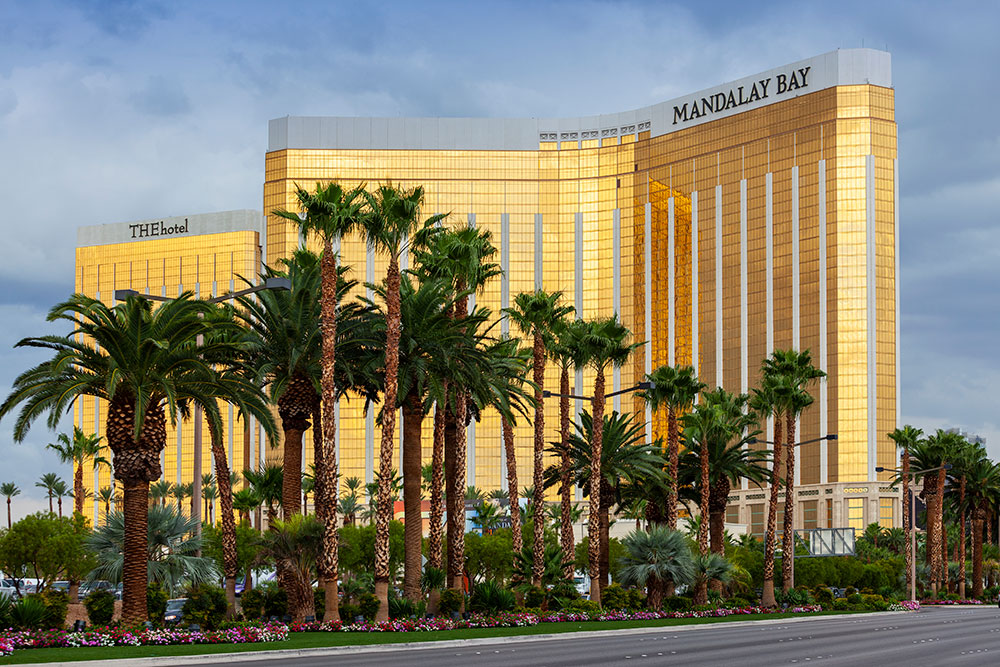 You’ll want to stay anywhere on The Strip to be in the heart of all the action. The Park MGM (formerly the Monte Carlo) sits on what was once grounds of The Dunes, a famously mafia-controlled casino where the likes of Frank Sinatra and Judy Garland once performed in the 1950s (along with lots of others looking for a fresh start). Today, the hotel features everything you’d imagine a luxury casino and mega-resort to have: almost 3,000 rooms (259 of them luxury suites), three swimming pools, a spa, fitness center, restaurants, shops, and of course, the casino floor. The hotel is also home to the CityCenter Tram which offers direct rides to the Bellagio and Crystals retail district every five minutes making getting around town with little legs a snap and is across the street from the T-Mobile Sports Arena and New York, York New York.

Mandalay Bay Casino Resort has loads of family-friendly activities under one roof. The resort has hands-down the best pool area in Vegas, covering 11 acres, with a sand beach leading to a zero-entry pool, a lazy river, a giant wave pool, full-service cabanas (think tiki drink, nosh and massage), and at night, concerts and s’mores at the fire pit. One caveat: the pool is only open seasonally so be sure to check for availability.

It’s also home to the Shark Reef Aquarium, which has more than 2,000 animals, including several types of exotic sharks, opportunities to have Animal Encounters, and walk along a see-though underwater tunnel. HAPPY PLACE is an immersive, multi-sensory pop-up exhibition with giant stilettos made of candy, a ball pit, a confetti dome and a rubber ducky bathtub that’s perfect for photo ops and kids of all ages. 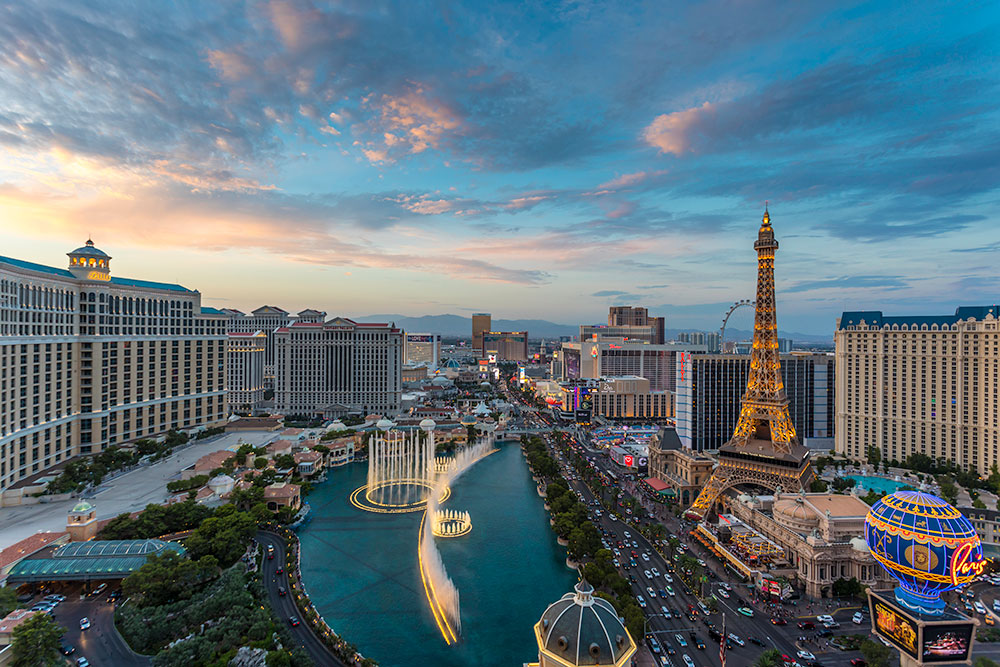 Las Vegas has no shortage of entertainment options, from superstar musicians doing a residency run (teens may enjoy a concert), to Cirque du Soleil, and even Gregory Popovich’s Comedy Pet Theater. Along The Strip, both Hershey’s Chocolate World and the M&M’s store are great stops. Hershey’s has oversized chocolate bars and replicas of the Statue of Liberty made of chocolate and licorice, a wall of Kisses and of Jolly Ranchers plus loads of branded merch. At the M&Ms store, visitors can revel in four floors of chocolate-coated bliss, from a rainbow of 16 colors of M&Ms lining a self-serve wall to M&Ms personalized with their own photo on it.

Vegas can get spendy fast ($8 Frappucino, anyone?), but there are lots of freebies for families in Vegas. Start with the displays at many resorts: among the many that have noteworthy attractions are the volcano show at the Mirage, the fountain show at The Bellagio, and the Viva Vision light show on Fremont Street. The Flamingo, just a short walk from the strip, has 15-acre wildlife habitat visitors can explore for free.

Go There: A Treasure Hunter’s Guide to Myrtle Beach, SC

The Forum Shops at Caesars Palace has an animatronic show every hour from 10 am to 11pm called Fall of Atlantis with fireballs, fountains, and a 50,000-gallon aquarium full of tropical fish in the background. In the same complex, the Miracle Mile shops have a ‘thunderstorm’ in the middle of the mall which runs hourly Monday to Thursday and every half hour on the weekend. At the Venetian’s Grand Canal Shoppes, there are classically trained singers, actors, and musicians holding a Carnival in St. Mark’s Square. Cirque du Soleil offers two free half-hour shows, KA 360 and The Beatles LOVE Magical Technical Tour, that give people a behind-the-scenes look behind the curtain to learn about the history, artistry, sets, and technology.

Vegas is a hedonist’s dream–and food and drink are one of life’s greatest pleasures. Everything is larger than life there and you can access just about anything morning or night. There’s no shortage of places to eat or drink in Vegas from places like Aureole, which features a 50,000-bottle collection in its wine tower attended by aerialist sommeliers to Guy Fieri’s Vegas Kitchen & Bar inside LINQ (order the Trash Can Nachos) and everything in between.

When doing Vegas with the fam, it’s nice to have options, so that means one of the many food courts or buffets. For food courts, the Cosmopolitan’s Block 16 Urban Food Hall will bring the best of the U.S. to you in one place: Hattie B’s Hot Chicken, Tekka Bar Handroll & Sake, Ghost Donkey, Pok Pok Wing, Lardo, and District: Donuts. Sliders. Brew.

The Forum Food Court gathers some of New York’s best-known fast casual concepts, like Smashburger and Smoke & Sizzle Barbeque. For buffets, Le Village at Paris Las Vegas is a winner: The menu takes its inspiration from French provinces and their villages. Several of the stations, like the crepes, are custom preparations along with a buffet featuring French classics like bouillabaisse or cassoulet and familiar favorites like mashed potatoes, steamed vegetables, and pastas.

America in the New York, New York resort features food from around the country and a giant map of the U.S. on one wall. With everything from spaghetti and meatballs to ribs and sesame chicken, even the pickiest eaters will be able to find something. At Mandalay Bay, Libertine Social is a swanky contemporary American restaurant with a great artsy lounge atmosphere and a menu by James Beard Award winner Shawn McClain. Portions are generous enough to share and prices are reasonable for the quality and quantity. 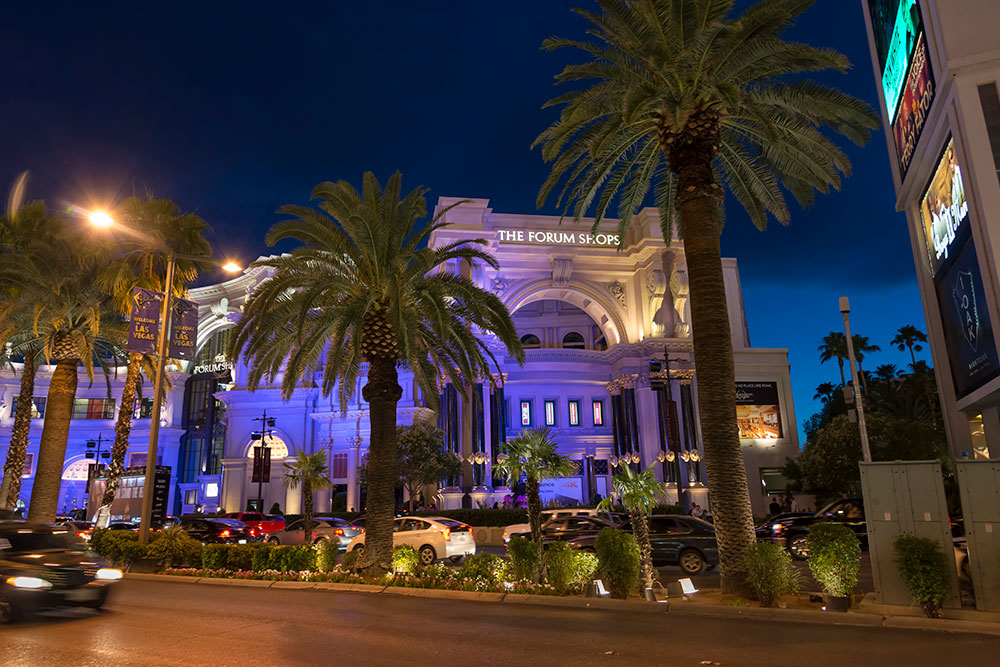 Vegas has everything, and I do mean everything, that a person could possibly want to find when shopping. Each resort has its own boutiques with specialty items, but if you want to hit the shopping jackpot, head to the Forum Shops at Caesers Palace and the Miracle Mile Shops at Planet Hollywood. The Forum Shops are a cool place to spend the day because there are lots of replicas of famous Italian fountains that make for great photo ops, the buildings are designed to look like those along the canals of Venice, and the ceiling is painted to look like the sky.

While you’re there, have lunch at The Palm and take a look at the restaurant’s trademark autographed caricatures painted on the walls of Las Vegas royalty, like Mariah Care, Jerry Seinfeld and Lisa Vanderpump, the reality TV star who owns Vanderpump Cocktail Garden.

The Bellagio really is a remarkable place. Outside, it feels like a sprawling Italian villa and it’s got the fountain show that’s syncopated with music. After coming through the grand glass-domed entryway, you’re greeted with glass artist Dale Chihuly’s colorful canopy of hand-blown flowers called “Fiori di Como,â€ which covers 2,000 square feet and weighs 20 tons.

In the Promenade Shops across from the main pool entrance is the Bellagio Gallery of Fine Art, which displays world-class art temporarily on loan from renowned museums and private art collections from around the world for six months or more, along with their artists in residence program, where an artist is selected to live and work in Las Vegas while creating a piece of art for MGM Resorts Fine Art Collection.

The Bellagio Conservatory & Botanical Garden has jaw-dropping seasonal horticulture displays in its 14,000 square foot space – an ideal place for selfies. Its four pools are fit for royalty. Sadelle’s American restaurant has a vintage country club feel with a blend of high/low on the menu serving tuna tartare alongside matzoh ball soup or a composed Waldorf salad alongside a grilled cheese sandwich, all in an elegant setting.