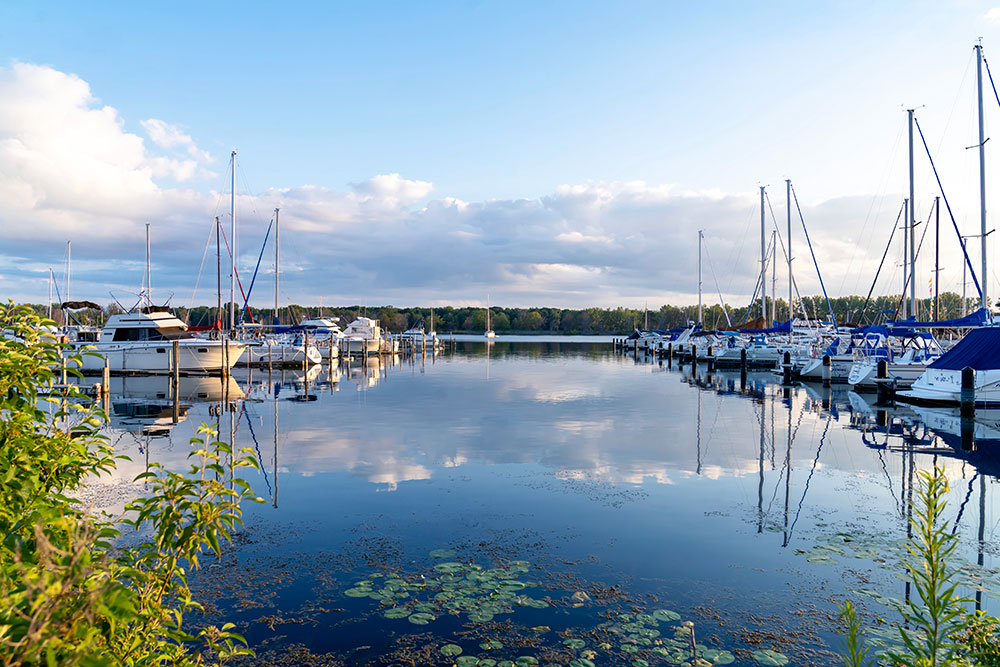 If you’re thinking of making a big move, you’re probably considering an array of factors in your new city or town – good schools, a strong economy, well-paying jobs and a high quality of life.

Pennsylvania cities have it all – and then some. And, perhaps most importantly, many of Pennsylvania’s cities are still affordable. Families, young professionals and retirees alike enjoy a low cost of living and a high quality of life, which together make for a pretty sweet lifestyle.

Below, we’ve rounded up some of the coolest, most affordable places to live in PA. Check out the stats and intel on each one, and see what PA place is right for you.

Harrisburg may be the seat of Pennsylvania’s state government, but it’s still an affordable place to live, and an increasingly young and cool one at that: Harrisburg was recently ranked #7 on Realtor.com’s list of the Top 10 Markets for Millennials in 2021.

Not only that, but residents here are proud of their city’s rich and diverse offerings ranging from Shakespeare to baseball and fine arts to agriculture. The Pennsylvania Farm Show, for instance, brings together some 400,000 people with food, competitions and exhibits that highlight the commonwealth’s strong agricultural industry.

Another point of pride: The capitol building itself. This ornate domed structure, completed in 1906, is so beautiful that even President Theodore Roosevelt described it as “the handsomest building I ever saw.â€ 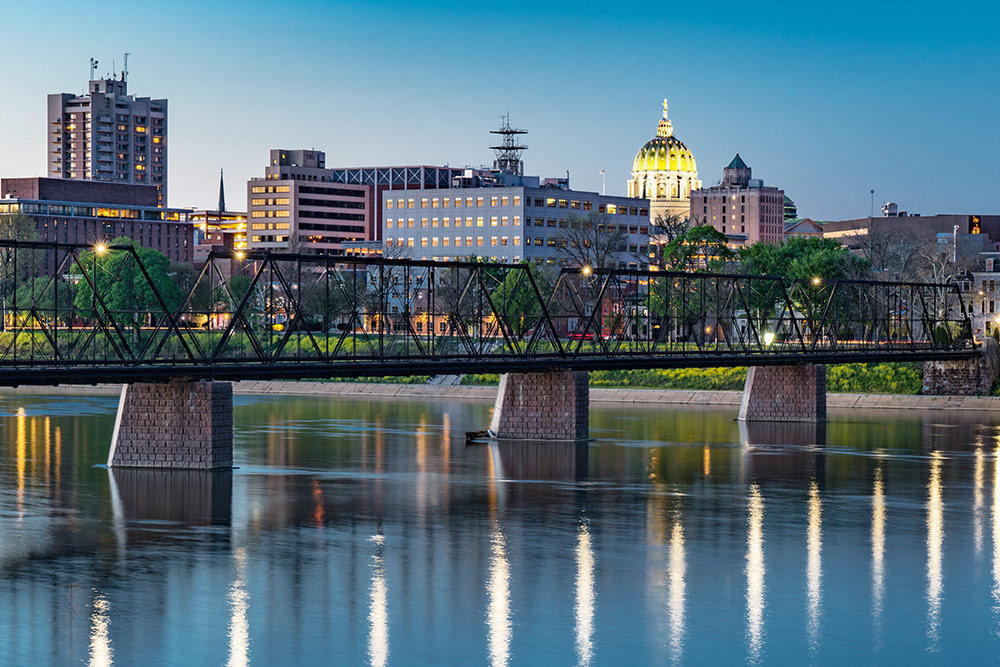 Lebanon is perhaps best known for its famous bologna sausage, which looms so large in this small southeastern PA town that folks here drop massive tubes and blocks of bologna on New Year’s Eve instead of a glittery ball (yes, really).

It’s also an affordable place to call home for its roughly 26,000 residents. With an average monthly mortgage payment of $424.80, Lebanon homeowners can stretch their paychecks further and take advantage of the region’s many amenities, like the historic Lebanon Farmers Market. It’s been around since 1982 and is located at the site of the former Lebanon County Jail. 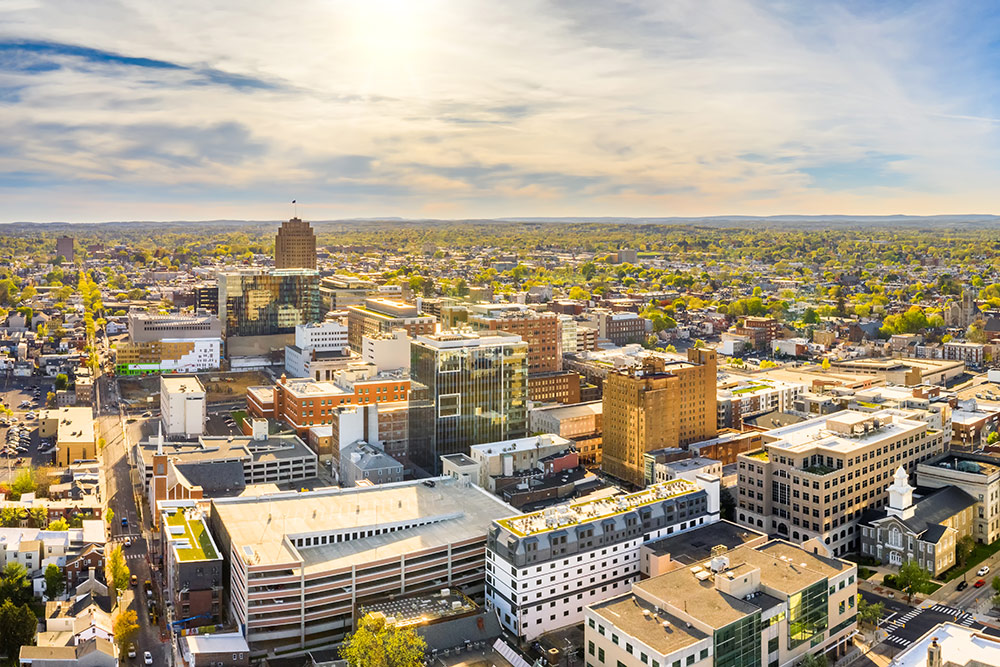 Allentown is probably not what you’re picturing if you’re a fan of Billy Joel’s 1982 classic “Allentown.â€ Nope. This Lehigh Valley city isn’t a dying manufacturing town, but rather, it’s a thriving and affordable place to live with a strong economy, new development and plenty of family-friendly amenities.

Allentown is the third-largest city in the commonwealth, home to some 120,000 residents who enjoy a high quality of life and a low cost of living. For the kids, there’s Dorney Park, a water and amusement park. Art lovers can also find a refuge in the well-regarded Allentown Art Museum.

Located in the heart of Amish Country, Lancaster has maintained its small-town feel and affordability while continuing to grow and evolve.

The city has a long, rich history – it even served briefly as the capital of the American colonies and, later, as Pennsylvania’s capital city. Lancaster is home to delicious dining options, lots of cool small businesses and many arts and culture offerings.

It’s also a great place to raise a family, thanks to a top-notch school system and tons of kid-friendly activities, including gorgeous farm tours and local amusement park Dutch Wonderland. 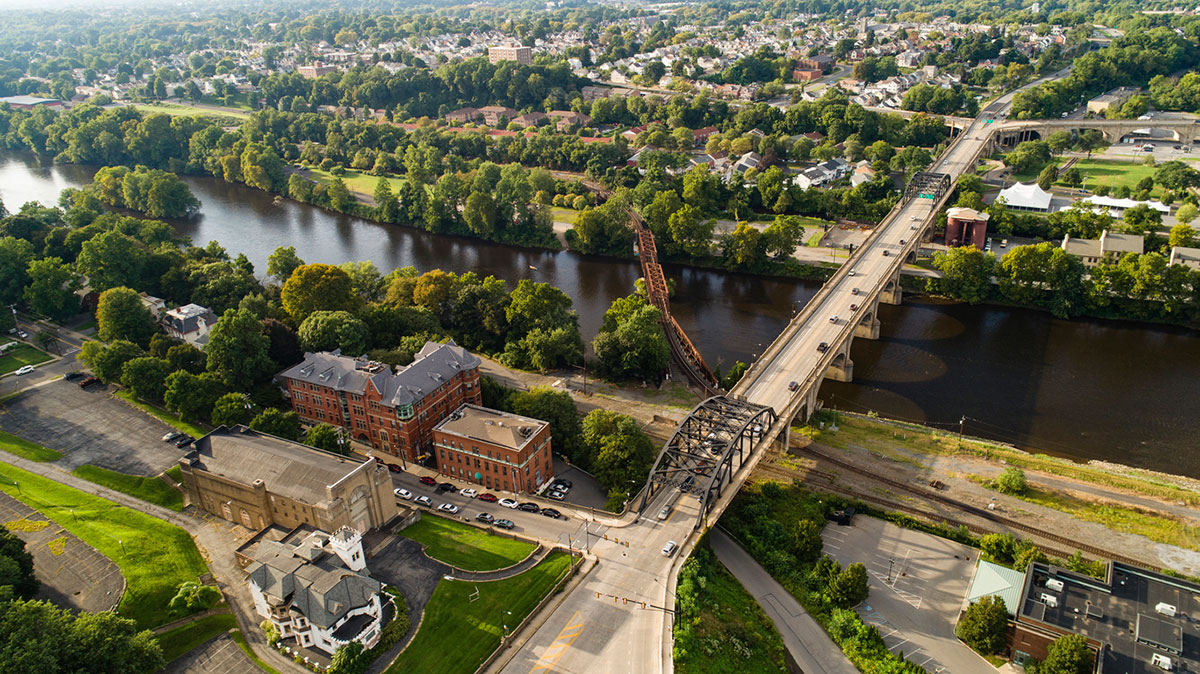 On top of its affordability, Bethlehem has a lot going for it.

Located in the heart of the Lehigh Valley, Bethlehem has successfully navigated the changing tides and has transformed itself from a steel town into a hub for innovation and growth.

Today, the city has a robust economy spurred on by employers like St. Luke’s Hospital, medical and pharmaceutical company B. Braun and candy company Just Born. It’s also home to several higher education campuses, including Lehigh University, Northampton Community College and Moravian College, which oversees the oldest bookstore in America and the oldest continuously operating bookstore in the world.

Erie has earned quite the positive reputation for itself over the years. This city on the lake in northwestern PA is welcoming and inclusive to people of all backgrounds, including immigrants and refugees from war-torn countries like Syria, Bhutan, the Democratic Republic of Congo and Ukraine, just to name a few.

Many of these refugees – as well as other Erie residents – are able to launch small businesses, own homes and thrive thanks to Erie’s affordability.

Plus, on top of that, the city offers a robust quality of life, complete with an eclectic array of tasty restaurants, public beaches, parks, museums and live performances. A few of our favorite Erie activities? Exploring the historic Presque Isle Lighthouse, downtown walks fueled by an Ember + Forge latte, and cheering on the Erie SeaWolves minor league baseball team. 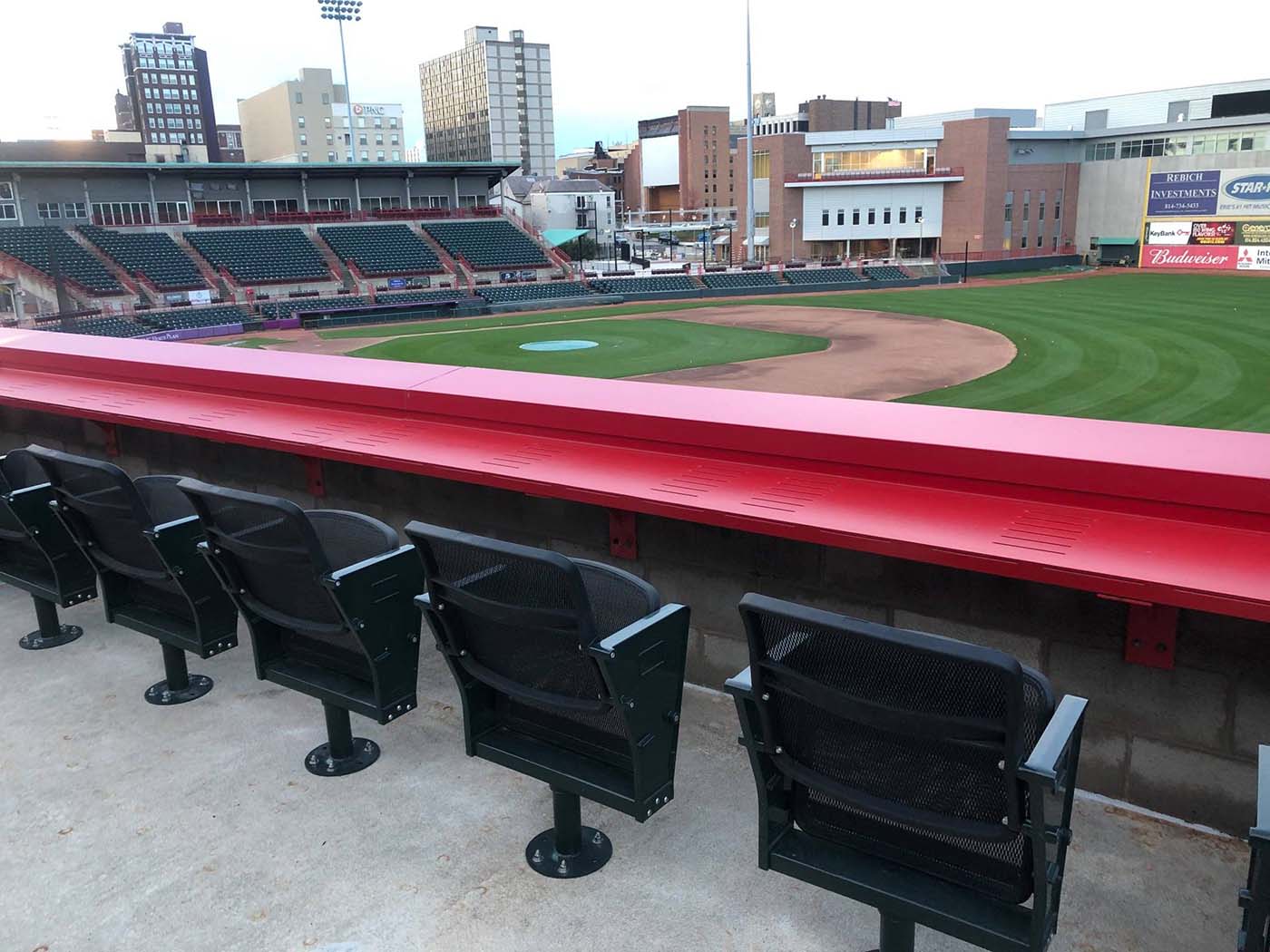 Scranton is part of the larger Scranton Wilkes-Barre region, but this small city has been able to maintain its own identity while contributing to broader regional economic growth and prosperity.

Scranton itself is home to some 77,000 residents who enjoy the beautiful parks, summer concerts and cheering on the city’s many sports teams. Lake Scranton is also a popular spot for running, walking, cycling or just getting outside to breathe in the fresh air.

The city is also home to six colleges, universities and technical schools, which gives Scranton residents plenty of opportunities to refresh their skills and learn new things.

Located in southern Pennsylvania, York is a city that values diversity and innovation. Though it’s just a few hours from Pittsburgh, Baltimore, Washington, D.C. and New York City, York has a much lower cost of living and doing business.

That’s one reason many entrepreneurs are settling down in York and taking advantage of the region’s many resources and centers that support small businesses. Plus, the city has a healthy economy bolstered by companies that make everything from motorcycles to pretzels.

Beer lovers will love York’s growing selection of breweries, including beloved Liquid Hero Brewery. For families, York offers lots of parks and trails – including the Heritage Rail Trail that runs through the county – farms, museums and more. 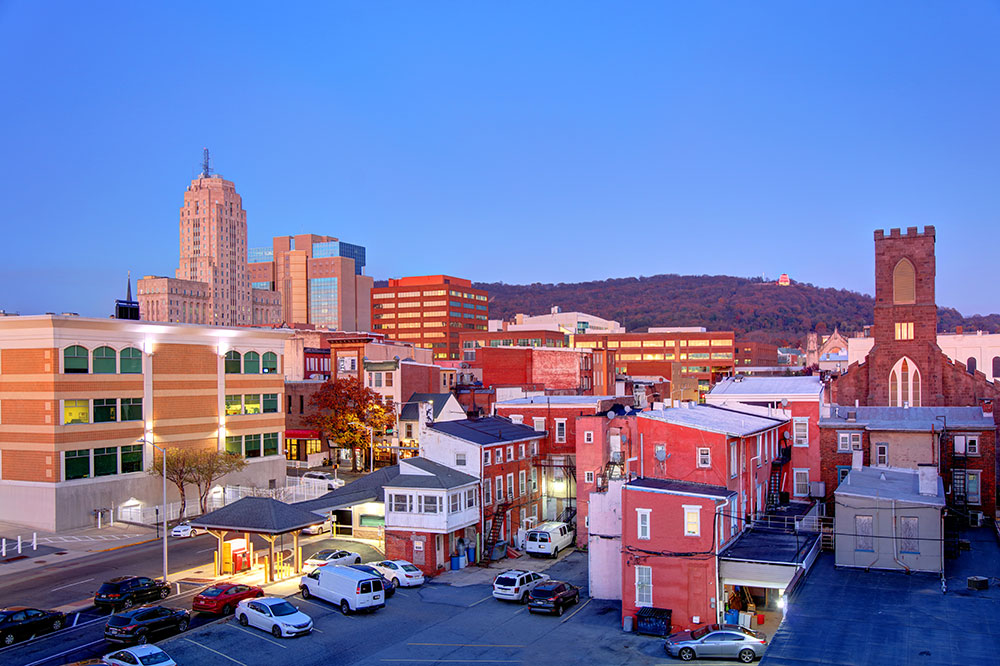 If you’ve ever played Monopoly, then you already know Reading, PA – even if you didn’t realize it. One of this city’s biggest claims to fame is the historic Philadelphia and Reading Railroad, which appears on the original Monopoly board game. In real life, the railroad helped boost Reading’s economy by carrying steel and iron.

Today, Reading is home to some 88,000 residents who enjoy a low cost of living and a strong economy driven by agriculture, manufacturing, technology and healthcare.

Located in the heart of the Pennsylvania Wilds, Lock Haven is surrounded by untouched natural beauty.

Abundant hiking trails, charming bed-and-breakfasts, an aviation museum, outdoor concerts at an amphitheater with a floating stage – these are just a few of the elements that make Lock Haven a great place to live and work. And with just 10,000 residents, it’s got a true small-town vibe that is hard to find these days.

This affordable city is home to Lock Haven University, a beach along the Susquehanna River and a gorgeous paved riverwalk.