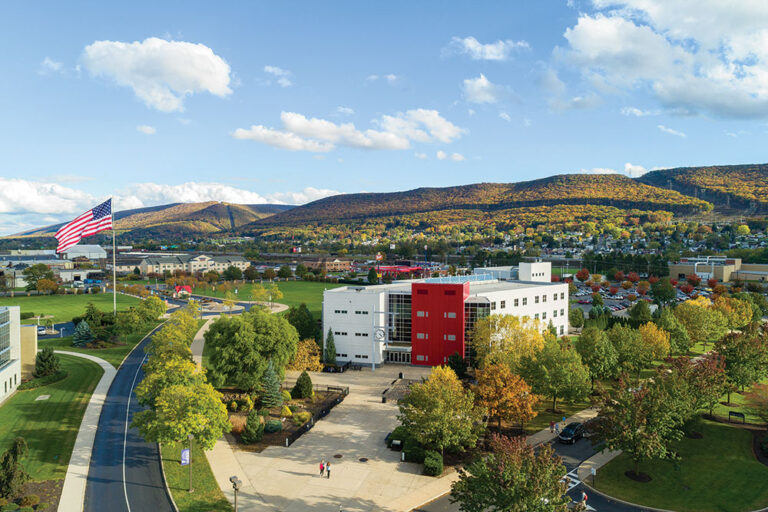 Central Pennsylvania is a place where entrepreneurs dream big and make their ideas take flight. You can nurture your business, your family and your own well-being here. It’s a place where you can work, live and grow. Here are a few stories of people doing just that.

Something in the Water

President and COO Ronn Cort has spent much of his career traveling the globe helping companies find the best locations to manufacture products.

One of his early tasks at the company was to evaluate whether or not Central Pennsylvania was the right place to continue manufacturing operations for KYDEX.

“I spent my first six months as president living on the production floor,” he recalls.

“What I discovered was a level of passion, commitment and can-do attitudes that I had not experienced at any other manufacturing facility on three continents.”

Since then, KYDEX has invested heavily in expansions at their Central Pennsylvania location and the community.

Today, KYDEX routinely wins accolades as one of the most productive units in the $11 billion parent company’s portfolio.

“How? It’s Central Pennsylvania,” says Cort. “There’s something in the water.”

The Best of Both Worlds

“I’m the seventh generation of my family to live and work here.”

Moving often during his military and business career, he jumped at the opportunity to return home.

“We have access to major metropolitan areas but can live life with small-town convenience.”

“I love spending time outdoors. You can get away from it all and go hike, bike, run, fish and kayak,” he says of the region’s abundant natural areas.

“Within a short distance of where I live, I could go on a different hike every day of the year. All of this at home with the benefit of taking my children to the National Zoo in D.C., then walking the Mall to see the monuments and still be home in the evening.

It’s All About Community

Jeff Bean moved from the West Coast to accept a position with Geisinger in Central Pennsylvania. “It took me a long time to unlearn checking Google maps every time I was going somewhere,” he says of the traffic-free commutes.

“I learned to surf in the Pacific Ocean,” says the San Diego native. “But you have a different kind of open space here. I would look out the window as the sun was coming up, and it made me feel the same way as looking at the ocean,” he recalls of his move to an area farmhouse.

“It’s been such a great experience for me, and one I never really expected. I came for the work and stayed for the community.”

Now living in the heart of Lewisburg, Bean loves that he can walk with his dog, Zinc, just about anywhere and be greeted with a smile and a dog treat.

“Anybody I’ve met will go out of their way to help you.”

He even enjoys the four seasons. “There’s no such thing as bad weather – there’s only bad equipment,” he says like a true Pennsylvanian.

Brian Vargo was born half an hour away from where he lives in Lewisburg, but much of his adult life centered around Japan.

An adventurer at heart, he appreciates how high-quality gear enhances the enjoyment of travel and the outdoors. Upon his return to Central Pennsylvania, he embarked on turning his adventure blog into a business and forged a collaboration with Equinox,  a Williamsport distributor of outdoor gear.

“This has been a great place to build my business, and the resources I have used have been incredibly helpful.”

Vargo soon launched his own company, Vargo Outdoors, and its growth was fueled with assistance from Bucknell University’s Small Business Development Center (SBDC) and Pennsylvania’s Global Access Program through SEDA-COG.

Like Vargo, Wendy and Carlos De Osambela dreamed of owning their own business, but they were far from family roots in El Salvador and Peru when they relocated to Selinsgrove.

“I’m so grateful for the support the town has given us. We couldn’t have picked a better place to start a restaurant. We get phone calls as early as 7 a.m. for people wanting to reserve a dinner spot!”

“When I moved here, what I missed most was the food. I wanted something familiar,” Wendy says.

Like Vargo, she took her idea for a restaurant to the SBDC. “They are the reason why we are here, and they continue to be a great resource,” she adds.

In State College, near Penn State University, KCF Technologies has surged past the “startup” phase, and the continued rapid growth invigorates Co-Founder and CEO, Jeremy Frank.

We “solve industrial problems through the convergence of people and technology,” he explains of creating wireless sensors for manufacturing equipment. “We call it giving machines a voice.”

“The access to talent by a very large and very diverse, world-class university has been the dominant factor in being able to handle the growth we’ve had.”

To learn more about working, living and growing in Central Pennsylvania, visit FocusCentralPA.org/livability.