The Greenville site is now the global home of F-16 production and sustainment. 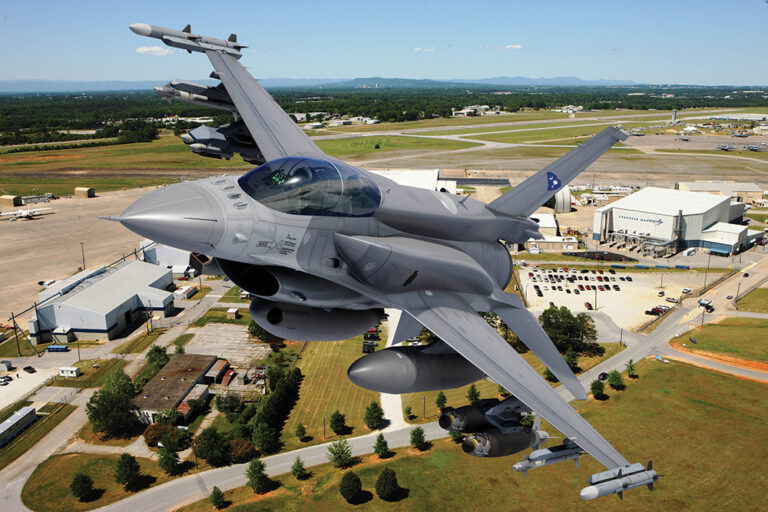 Lockheed Martin’s growing F-16 production and sustainment operations in Greenville, S.C., are contributing to the defense of freedom around the world while creating jobs and strengthening the local economy.

The company is adding hundreds of new jobs to the F-16 team by the end of this year, and those interested can apply at lockheedmartinjobs.com/greenville. All of those new jobs are in support of F-16 production and sustainment and represent Lockheed Martin’s longstanding commitment to meet its customers’ current and future needs and to bring more jobs to South Carolina.

Production of the F-16 in Greenville is ramping up incrementally. Flight testing of the first F-16 Block 70 jet, being produced for Bahrain, is expected to begin in 2023. The F-16 Block 70 production rate will increase significantly throughout that year, with deliveries for additional customers continuing into the mid-to-late 2020s.

Production of the F-16 is new in Greenville, and team members like Majik Prior are excited to be part of that history.

“The site is a very team-built, team-oriented site, and if anyone can do anything to help you, in my experience, everyone that can will help you,” says Prior, F-16 production structures lead.

“Right now, we’re building the F-16. It has not been done here in Greenville before, so when it’s complete, to say, ‘Hey, I was there when the first F-16 flew out of Greenville,’ it’s going to be something that you can be proud of,” he adds.

The company has more than 900 employees in Greenville. The site encompasses nearly 275 acres, including 16 hangars, support shops and warehouse space.

For more than 38 years, Lockheed Martin has played a key role in the community. The company has given millions of dollars in philanthropic donations and its employees have volunteered thousands of hours with local nonprofits. The company contributes an average annual economic impact of $100 million to the area.

Lockheed Martin supports the Aircraft Maintenance Technology program at Greenville Technical College in a variety of ways, including providing more than $400,000 in charitable contributions.

Some of these donations have been used for an endowed fund, which has provided nearly 90 scholarships to date. A 2014 gift helped to create campus-based centers where veterans can gather and study.

Lockheed Martin partnered with the college to create a pre-apprenticeship training program. Students learn skills in the classroom and apply them on the job at Lockheed Martin. This year, Lockheed Martin is targeting to have 60 students complete the training.

“Lockheed Martin is growing, and with that growth comes a greater need to create a pipeline of skilled job candidates,” says Ann Wright, vice president for advancement with the Greenville Tech Foundation.

“The company has worked closely with the college to address specific training requirements, growing a skilled workforce together and ensuring, through its continued generosity, that the college has the latest training tools and students receive the highest quality education,” Wright concludes.