8 Reasons to Move to Greenville, SC

Greenville offers all the benefits of a big city, without the inconveniences common to major metropolitan areas 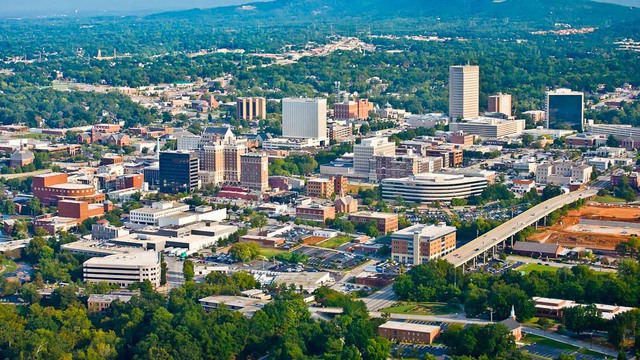 Located in the foothills of the picturesque Blue Ridge Mountains – and more or less equidistant between Charlotte and Atlanta – Greenville, S.C., has been lauded for everything from its quality of life to its impressive economic growth and potential to become “the knowledge economy’s next big thing.”

Though Greenville may seem like an overnight sensation, the city’s success has been decades in the making. It embraced walkability and the use of ample green space years before it became fashionable to do so. And longtime mayor Knox White credits the bold makeover of the city’s downtown as a key factor in helping to attract marquee multinationals to the area (think: Michelin’s headquarters in 1988, and BMW in 1994), which paved the way for other businesses to establish or expand manufacturing operations across the state.

Following are eight reasons why people have been moving to Greenville, a city with a healthy mix of places to go and things to do.

Falls Park on the Reedy has been described as “an oasis within the city” – a postcard-perfect downtown park that features trails, landscaped gardens, scenic overlooks, waterfalls and the “floating” Liberty Bridge, a pedestrian suspension bridge that draws visitors from the nearby restaurants and stores on Main Street. Get a flavor for the area by taking a virtual tour of the Swamp Rabbit Trail, a 17.5-mile multi-use greenway that winds along the Reedy River and connects Falls Park with area schools and businesses.

Adjacent to Falls Park is the West End Historic District, part of a neighborhood that dates back to the 1830s, one once dominated by textile mills, warehouses and factories. Today, West End is known as the arts and entertainment center of the city, and has a dozen restaurants and an array of shops and boutiques.

One of the most popular entertainment destinations in the city is Fluor Field, home of the Greenville Drive, the Class A affiliate of Major League Baseball’s Boston Red Sox. Most notably, the stadium is modeled after Boston’s Fenway Park and features its own “Green Monster,” a 30-foot-high wall in left field that includes an old-fashioned manual scoreboard.

A Saturday visit to Fluor Field isn’t complete without a stroll across the street to the Shoeless Joe Jackson Museum and Library (free, but open just one day a week), which is located in the home where the infamous professional baseball player lived and died. The nonprofit museum displays photographs and artifacts associated with Shoeless Joe, a lifetime .356 hitter who was banned from baseball along with seven other Chicago White Sox players after being accused of fixing the 1919 World Series, this despite the fact that he hit .375 in the Series.

History and the Arts

Greenville is home to an eclectic mix of museums that one might only expect to find in a city many times its size. To name but three, consider: the Greenville County Museum of Art, which features the world’s largest public collection of watercolors by Andrew Wyeth; the Bob Jones University Museum & Gallery, which displays Old Masters like Rubens, van Dyck, Tintoretto and Cranach; and the Museum and Library of Confederate History, which houses countless artifacts from the 1860s, and has a research library and documents room that includes Confederate currency and newspapers from the period.

The city’s cultural centerpiece is the Peace Center, a multi-use performing arts venue that includes a 2,100-seat concert hall and a 400-seat theater. The center hosts events including classical, jazz, country, bluegrass, folk, pop and rock concerts, as well as comedy acts and Broadway shows. Resident companies include the Carolina Ballet Theatre, Greenville Chorale and the Greenville Symphony Orchestra, among others.

No discussion of Greenville would be complete without mention of Furman University, one of the country’s premier private liberal arts colleges, which has a Division I athletic program that has produced top-flight PGA and LPGA Tour pros, as well as Clint Dempsey, who stars for the U.S. national soccer team. The magnificent campus is well worth a tour, having been designed by the same Boston firm that restored Colonial Williamsburg.

While there are no shortage of great restaurants in Greenville, a favorite among locals is Smoky Dreams Barbeque and Catering, which is located next door to a McDonald’s and has “value meals” that can’t be beat. One can get a delectable pulled pork sandwich with two sides and a tea for just $7.50, or a Baby Back Rib combo for just $8.25. But if you have the opportunity to visit just once, the brisket is no doubt the best option, followed by a slice of homemade Lemon or Peanut Butter pie.

As if all of the above isn’t enough, Mayor Knox expects that even better times are ahead for Greenville, thanks in part to the highly visible improvements of recent decades, particularly in the downtown area.

“It’s getting easier [to effect change],” he says in an interview conducted earlier this year, “because success breeds success. A lot of cities are trying to get that first project done when people don’t believe in their downtown. We’re past that,” he says, noting that it’s much easier to sell people on improvements when you have a track record and can tell residents: “If you liked that, you’re really going to like this.”