Chattanooga region draws investment from around the world. 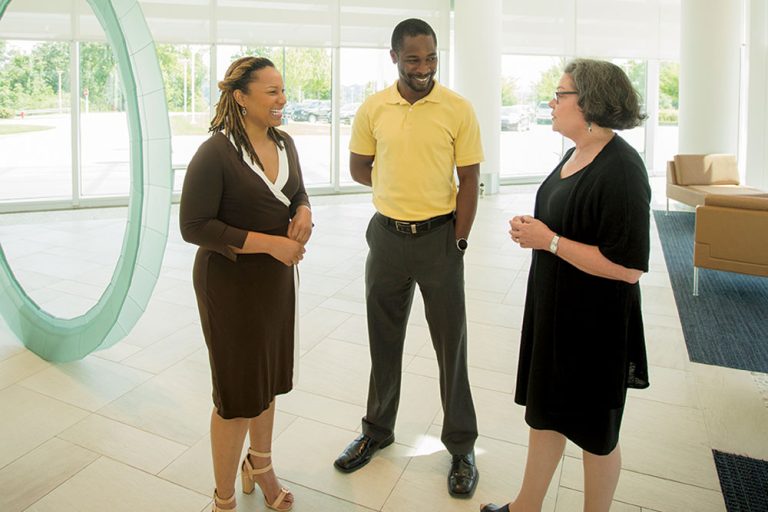 Wacker Chemie, which made the largest industrial investment in Tennessee’s history, produces specialty chemicals. Jackson Furniture manufactures chairs and other pieces. And tech company Skuid taps international markets to fuel its growth. They are vastly different businesses but share one secret of success.

All have operations in the Greater Chattanooga region, the address of choice for large corporations, small businesses and innovative entrepreneurs. They share the benefits of the region’s diverse $34.8 billion economy, a wealth of business resources, low cost of living, central Southeast location and a choice of urban and outdoor lifestyles that makes it easy to recruit and keep top talent.

“This is a great business environment with tremendous logistics and access to markets coupled with tremendous lifestyle options. There’s the choice of an outdoor-oriented lifestyle or a more urban experience living downtown,” says Charles Wood, vice president of economic development for the Chattanooga Chamber of Commerce. “A blend of business and lifestyle has made the region a place to be.”

The region is home base for a cross-section of major employers including Unum, BlueCross BlueShield of Tennessee, McKee Foods, Lodge Manufacturing, CBL, Metatrac, Shaw Industries, Mohawk and Amazon.

Greater Chattanooga’s advantages lure investment by international companies that employ thousands of people across the area, which includes nine counties in Tennessee, five in northwest Georgia and two in northeast Alabama.

Global companies investing in Greater Chattanooga include Volkswagen, which created nearly 17,000 direct and indirect jobs in the region. Other international employers include Bayer and BASF, which manufactures polymers used in the flooring, paper and other industries.

The region offers a wealth of resources that support foreign-owned companies, including French-American and German-American chambers of commerce, networking organizations and language programs in local schools.

A recent survey showed that K-12 students in Hamilton County, Tenn., speak more than 75 languages in the home.

International expansion works both ways. Skuid, a tech company founded in 2013, formed a new subsidiary in Europe, Skuid CH AG, with offices in Zurich, Switzerland. The company serves a number of customers on the continent, including leading insurance companies and manufacturers.

“Our expansion to Zurich is a reflection of the rapid growth we’ve experienced. After being named the fastest-growing tech startup in the state and region (in 2016), we’ve grown even more.We’ve been able to create over 50 professional jobs. We’re planning to add 50 more high-tech jobs in the coming months,” says Ken McElrath, Skuid’s president and CEO.

“In addition to our Chattanooga headquarters, we operate offices in San Francisco and London and we have remote employees in seven states. The Zurich office will bring us another step closer to worldwide support coverage for our global customers,” he says.

A culture of innovation permeates the region. Chattanooga, for example, is the  first city in the world to offer 10- gig Internet service to its residents through a municipal utility.

Economic growth has occurred naturally over the years as a result of the region’s many advantages. Wood expects great results from the creation of the Greater Chattanooga Economic Partnership, supported with funding from the private sector to promote regional growth.

Economic growth in any of the Greater Chattanooga region’s 16 counties has clear benefits for everyone, he says.

“Businesses have clients all over the region. People cross county and city lines several times a day to get to work,” Wood says.