Arts and culture options abound throughout the Greater Chattanooga area. 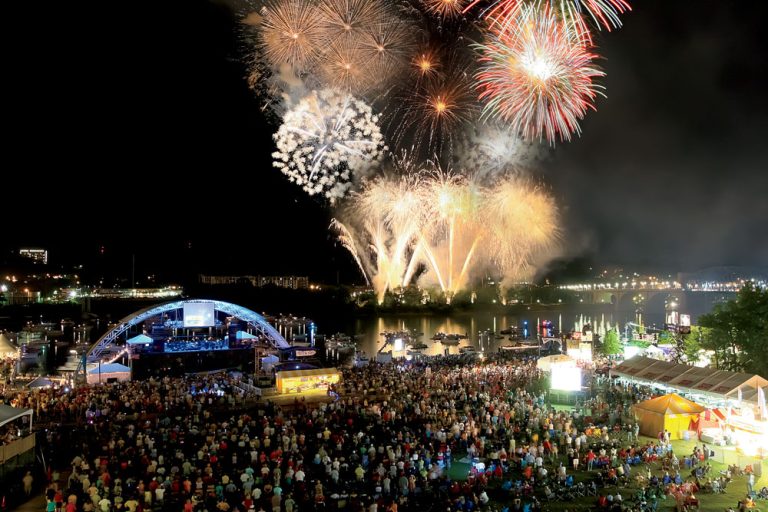 Greater Chattanooga has an arts-and-culture scene that belies its size. You don’t have to look hard to find something to do because there are options nearly everywhere you go, both within the city and outside the urban hub.

“We have shopping, there is live music spread throughout the region, there are festivals. We have that combination that keeps our local residents engaged, and at the same time is also attractive to visitors,” says Bob Doak, president and CEO of the Chattanooga Area Convention & Visitors Bureau.

Several arts districts have evolved over the years in the city, each with its own distinct characteristics. Bluff View has a European feel to it, with numerous shopping options and galleries.

The pedestrian-friendly NorthShore neighborhood features street performers and an eclectic atmosphere ideal for people-watching. Frazier Avenue in NorthShore has become one of the city’s premier locations for locally owned shops. Southside continues to grow as a live-music district, and is also home to the new 33-acre Sculpture Fields at Montague Park. And downtown’s Warehouse Row offers a mix of boutique shopping and dining in an 18th-century, stone-and-brick structure.

In addition to numerous local venues, the region stages a wide variety of music festivals and events throughout the year, with something for nearly every tuneful taste. The Riverbend Festival in June, an eight-day event, draws nearly 100 artists performing on five stages along the Tennessee River.

Other musical events include the 3 Sisters Bluegrass Festival (which was named by Great American Country as one of the top-five bluegrass festivals in the U.S., the Jazzanooga jazz festival and the popular Nightfall concert series, held in downtown Chattanooga each Friday night from May through August.

A new addition in 2017, the Levitt AMP concert series takes place in the fall on the lawn of the Bessie Smith Cultural Center. Chattanooga is one of 15 cities across the U.S. to receive a Levitt AMP grant award of $25,000 in matching funds to present 10 free weekly concerts featuring a diverse lineup of entertainment.

In nearby Polk County, Tenn., music lovers can enjoy the annual Delano Bluegrass Festival as well as the Camp Reggae Fest in Turtletow

Music is not the only reason for a celebration in Greater Chattanooga. Frank McDonald Jr., director of Ketner’s Mill Country Arts Fair in Marion County, says the overall festival calendar has increased significantly since his father founded the event 35 years ago.

“When he started it, there were only a few arts-and-crafts fairs going on around here. Now we’re swamped with competition,” McDonald says. “It’s a real blessing for the area.”

About 15,000 people attend the two-day Ketner’s Mill event, held on the grounds of an old 19th-century sawmill. The event attracts more than 150 exhibitors, including what McDonald calls “pioneerish” crafts such as broom, basket and soap makers.

In Dalton, Ga., the Creative Arts Guild’s Festival of Arts and Crafts has been held every year since 1963. It begins with a Friday night preview party that includes food from local restaurants, a jazz band and an early look at the artwork that will be on display over the weekend.

Other annual events throughout the region include the Chattanooga Film Festival, the National Cornbread Festival in Marion County, the Tennessee Strawberry Festival in Rhea County (which began in 1947) and the Prater’s Mill Country Fair in Dalton.

“For a community of this size, the culture and arts here is quite rich,” Brown says. “There are experiences here that are comparable to things you would find in much larger communities.”