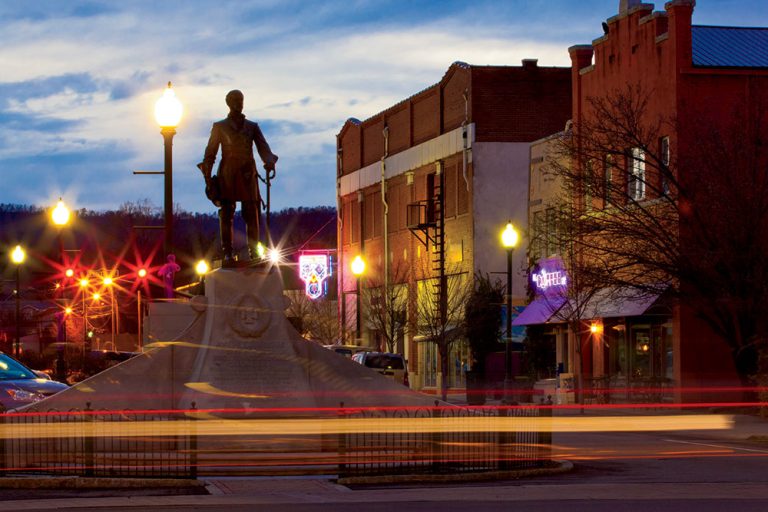 Offering cosmopolitan flavor without the big-metro hassles, Greater Chattanooga gives residents the best of all worlds. In addition to an affordable cost of living, abundant arts and entertainment destinations, and distinctive communities, the region is home to several vibrant downtowns as well as plenty of places to enjoy the great outdoors and get active throughout the year. It all adds up to a high quality of life that’s growing Greater Chattanooga’s reputation as a top spot to put down roots, drawing newcomers in droves.

Downtown Athens, Tenn., located approximately 60 miles northeast of Chattanooga, seamlessly blends historic charm with modern attractions and amenities. The district has an impressive selection of locally owned shops and restaurants, as well as destinations like The Arts Center that includes a 200-seat black box theater, exhibit and classroom space, and an art market. Downtown Athens is also home to Tennessee Wesleyan University, a four-year liberal arts institution that gives the community a college-town vibe.

“We have a very pretty downtown with a gorgeous courthouse [the McMinn County Courthouse],” says Patti Greek, president of Athens’ Downtown Business Association and owner of Greeks Bearing Gifts, a downtown shop that’s been in operation for 20 years.

In addition, Greek says the already-thriving district is poised for growth. She points to Athens’ recent inclusion in the Tennessee Main Street Program, a statewide resource for communities interested in revitalizing and improving their downtowns, and says the four businesses that recently opened in downtown Athens did so because they’re excited about the district’s plans for expansion.

“We have great facilities here, and I think our community is only going to get better,” Greek says. “My husband and I can’t imagine leaving Athens.”

Not far across the Tennessee line, Dalton is a Georgia Main Street community and boasts the state’s fifth-largest downtown district geographically. According to Garrett Teems, director of the Downtown Dalton Development Authority, the city’s downtown is also one of the most-walkable in the state.

Notable downtown Dalton attractions include more than 20 restaurants, entertainment venues like the Dalton Little Theatre, arts destinations such as Dave & Pauli’s Art Emporium and the Creative Arts Guild, and dozens of unique shops.

“Our downtown is quite large and diverse, especially for such a small town,” Teems says. “We have something for everyone, and it’s a very safe, family-friendly area. We’re currently working to get an amphitheater and a performing arts venue in the center of our downtown, as well as a green space. It’ll be a place where you can bring the kids, listen to a band and grab a bite to eat.”

Greater Chattanooga is home to several prime outdoor destinations, including the Ocoee River, which runs through eastern Tennessee and is known for its whitewater rafting opportunities.

The Tennessee River draws competitive rowers for the annual Head of the Hooch Rowing Regatta, and it is the site of the 2.4-mile swim that competitors complete during the IRONMAN Chattanooga race.

Land lovers have plenty of options, too, with Fort Payne offering access to Lookout Mountain and a 15-minute drive to Little River Canyon National Preserve, which offers hiking, camping and hunting.

Dayton, Tenn., lays claim to Chickamauga Lake – one of the top bass fishing lakes in the nation – and the community has recently rebranded itself as “The New Bass Fishing Capitol of the South.”

Although Chickamauga Lake plays host to both amateur and professional sports fishing tournaments, luring anglers from across the county, it also draws millions of swimmers and boaters each year.

“As a smaller community, we were looking for economic opportunities, and we found those in sports fishing on Lake Chickamauga,” says Dennis Tumlin, executive director of the Rhea Economic and Tourism Council. “We have increased our overnight hotel stays by about 18 percent since we began our rebranding process, which has been fantastic for our community’s economy. It’s a win-win for everyone.”