The 16-county region of over 1 million residents boasts a roster of innovative companies, affordability and a standout quality of life. 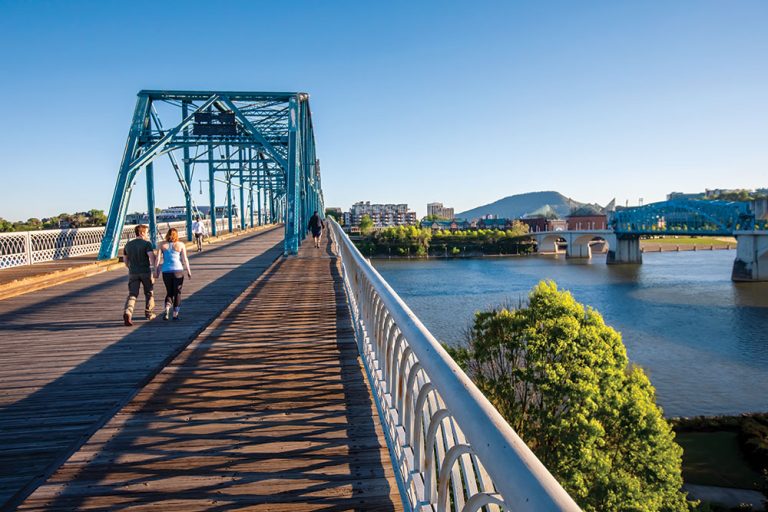 The greater Chattanooga region is rich in history, but no stranger to the modern world. The region continuously focuses on innovation and technology, creating an ecosystem that attracts highly advanced businesses and flourishing startups and entrepreneurs.

The park’s namesake is the 256-foot Fall Creek Falls, the highest freefall waterfall east of the Mississippi River.

Along with waterfalls and overlooks, Fall Creek Falls State Park offers several caves to explore, including Lost Creek Cave, which features five entrances, a waterfall and 7 miles of passageways.

Why Greater Chattanooga is the Perfect Place to Be

All on the Line

Things are truly up in the air at the Southeast Lineman Training Center (SLTC), one of the nation’s premier vocational schools for training workers for careers in electrical and communications line work.

Founded in 1999, SLTC offers a 15-week Electrical Lineworker Program (ELP) and a seven-week Communications Lineworker Program (CLP), both scheduled multiple times a year.SLTC’s facilities, which include 365 training poles, are on a 75-acre site in Dade County, GA, about 20 miles south of Chattanooga. The center’s 18 full-time instructors train nearly 800 students per year. Center graduates are in demand, with the average starting salary for an ELP graduate worker at $70,000 a year and at $58,000 for a CLP worker.

They don’t sleep on the job at Sierra Madre Research, but they make their work about maximizing time off.

The Chattanooga-based company produces innovative outdoor gear such as hammocks and hammock shelters. The products are primarily aimed at hikers, backpackers and campers who want to swap their heavy tents for lightweight gear.

The company’s most popular hammock product, the NubÃ©, includes a light cocoon that wraps around the user while sleeping. The cocoon creates a bug-proof enclosure and protects users from the elements. The NubÃ© also features a storage compartment underneath the hammock to keep backpacks off the ground.

Founded in 2010 by Richard and Juli Rhett, Sierra Madre Research has been featured on the television series Shark Tank, where it scored an investment from billionaire businessman Richard Branson.

The Companies it Keeps

Major companies make Greater Chattanooga a destination of choice for their headquarters.

That list includes Unum Group, a Chattanooga-based Fortune 500 financial services firm that provides a broad portfolio of financial protection benefits through the workplace and is a leading provider of disability income protection worldwide. Unum recently invested more than $40 million in its workspace, adding a health clinic, mothers’ rooms for new moms, meditation rooms and investments in technology that enabled a quick shift in response to COVID-19.

BlueCross BlueShield of Tennessee, the state’s largest health benefit plan company, also makes its home in Chattanooga, where it employs 5,500 people. The insurer serves more than 11,000 employer groups and has 3.5 million members.

Another success story is EPB, formerly Electric Power Board of Chattanooga, a municipally owned electric power distribution and telecommunications provider. EPB made history in 2010 when it became the first provider in the U.S. to deliver up to 1 gig internet speeds utilizing a community-wide fiber optic network that provides access to every home and business in its service area. In 2015, EPB became the first U.S. provider to make up to 10 gig internet speeds accessible to all of its residential and commercial customers as a standard offer. EPB serves more than 170,000 homes and businesses in a 600 square-mile area that includes Chattanooga, as well as parts of surrounding counties and areas of North Georgia.

The maker of one of the region’s signature food products has written a recipe for growth.

McKee Foods, producer of the Little Debbie snack cake line, has expanded its production plant in Collegedale in Hamilton County.

McKee Foods will invest nearly $500 million over the next 15 years to double the size of its production facilities and make improvements to the company headquarters. The overall expansion will add about 480 jobs in Collegedale, where the company employs nearly 3,000 workers.

This marks the plant’s fourth expansion in its 23-year history. McKee Foods began as a downtown Chattanooga bakery in the late 1920s and today produces Little Debbie, Drake’s Cakes and other snack products.

Founded in 2011 by Tim Piersant and Joe Ledbetter, Chattanooga Whiskey celebrated its decade milestone in 2020.

When Hamilton County eased its longstanding “no liquor manufacturing lawâ€ in 2013, Chattanooga Whiskey became the first legal distillery to open in Chattanooga since the days of Prohibition of the 1920s and 1930s.

From 2011 to early 2013 prior to liquor legalization in Chattanooga, Piersant and Ledbetter distilled their whiskey in Lawrenceburg, IN, and bottled it in Nashville. The partners were both key players in helping change the distilling laws in Chattanooga, where they always wanted to headquarter their business.

Ledbetter left the company in 2014, but Piersant continues there today, overseeing an operation that produces bourbon and high-malt whiskey brands such as Chattanooga Whiskey 91 and Chattanooga Whiskey 111. All of the whiskey is first aged in barrels for at least two years to eliminate any fruity yeast flavors. Chattanooga Whiskey can be purchased at the distillery’s retail bottle shop, as well as liquor stores in six Southeastern states.

The company operates distilleries in two Chattanooga locations. The Riverfront Distillery serves as the production home of its signature Tennessee High Malt bourbon. The Experimental Distillery on Market Street includes tours and tastings.

The company has won multiple awards during its brief history, including a 2019 Spirit of Innovation Award presented by the Chattanooga Area Chamber of Commerce.

The 4-1-1 on Greater Chattanooga

If you’d like to learn more about the greater Chattanooga area, check out the latest edition of Chattanooga Region Economic Development.