This is the Best City In Tennessee for Quirky Attractions

Can you guess which city is our pick? 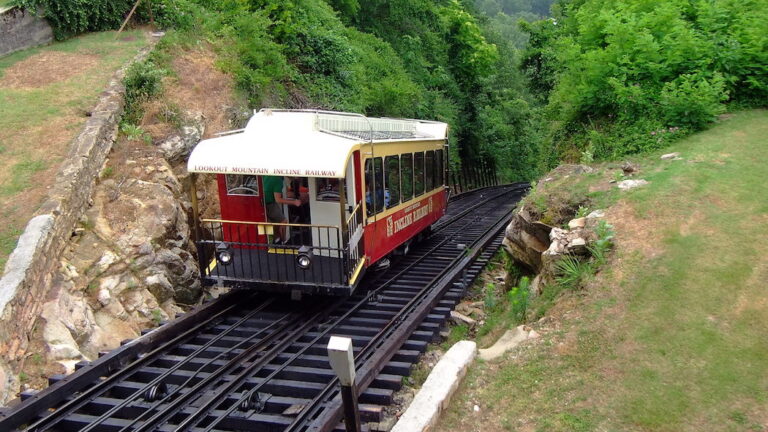 If you were planning to head to Gatlinburg, TN in the near future, but are now re-thinking it following all the crazy stuff that’s happened there, don’t worry: There’s another city in Tennessee that has even better quirky attractions. Plus more.

Don’t get me wrong: I love Gatlinburg and its various nearby amusements (Dollywood, hello). It’s just that I love another Tennessee city more–like, a lot more.

That city is Chattanooga, TN, where my family and I vacationed in 2010, deciding we wanted to hit all the tourist traps we’d heard about for years. The Incline Railway, Ruby Falls, Rock City: We even stopped in at The Battles for Chattanooga Electric Map & Museum, which was so hokey we spent the entire time making fun of it. This is what made the vacation classic, though. And why I’d recommend it to anyone.

Wanna move? Chattanooga is one of the 5 Most Affordable Cities in TN

On top of that, Chattanooga is just a beautiful city. Nestled between rolling hills, with a lovely waterfront and a downtown made for strolling, I’ve since returned several times, most recently last fall. It was on this trip that I discovered another one of Chattanooga’s hidden secrets: Its food scene. Coffee at Rembrandt’s, beers at Beast + Barrel, brunch at Tupelo Honey: It was absolute culinary heaven.

But before I get too far off track, let’s get back to those quirky attractions, and why they’ll trump anything else you’ll find in the Volunteer State.

Perhaps my favorite thing about this attraction was how they listed their hours. On the back of the ticket, it read:

I’m not an accountant, but they probably could have saved some ink by just typing: HOURS ALL YEAR 9AM-5PM.

These are the Best Places to Live in Tennessee

Anyways, the Incline Railway itself is a short trip up an alarmingly steep slope, making it (and they remind you 8,000 times) the world’s steepest passenger railway. It’s actually pretty fun. Plus, it takes you to the top of Lookout Mountain, which was the site of an important Civil War battle and has beautiful views of Downtown Chattanooga and the Tennessee River. What was quirky for me here was where the train dropped us off: the aforementioned Battles for Chattanooga Electric Map & Museum. Which is #2 on this list.

This features a large, old model of Lookout Mountain filled with plastic men and dusty grass that lights up as a voice narrates the events of the Chattanooga Campaign during the Civil War It’s both nicely informative and wonderfully hokey, and I hope it never changes.

Ruby Falls is a 145-foot-tall underground waterfall that was discovered in 1928, while a local cave enthusiast Leo Lambert was attempting to drill a shaft for an elevator in order to open up Lookout Mountain Cave as a tourist attraction.

In other words: This tourist trap was discovered while trying to make another tourist trap.

The 10 Bucket List Things You MUST Do in Tennessee

The tour of the cave is about a mile’s worth of walking, and leads you past charmingly-named wonders like “The Hall of Dreams,” “The Angel’s Wing,” and “Arabian Drapery*.” Then, you finally reach the falls, where your tour guide proceeds to light them up in dramatic, purple lighting as mystical music plays in the background and you think, “God Bless America.”

*Great band name if you’re looking for one.

Rock City is the worst place I’ve ever been, and by that I mean it’s the absolute best. The attraction features a long, rock-strewn trail that leads you between various peculiar rock formations (like “The Fat Man’s Squeeze,” a fissure in a large rock that’s maybe three feet wide). Then, you reach the High Falls of Lookout Mountain, which supposedly have a Native American legend attached to them—which is hilarious, considering the “falls” are manmade.

But the greatest parts of Rock City are by far the rock caves, which feature fairytale sculptures in nooks of the cave, painted so that they glow in the black lights that shine on them, while a soundtrack of oddly terrifying children sing nursery rhymes in the background.

The 8 Most STUNNING Waterfalls in Tennessee

In short, Chattanooga is a fantastic city—but it’s even better for its less pristine parts. Rock City, Ruby Falls, and the Incline Railroad add a layer of charm you don’t see all that often, making them must-sees should you pass through the area.