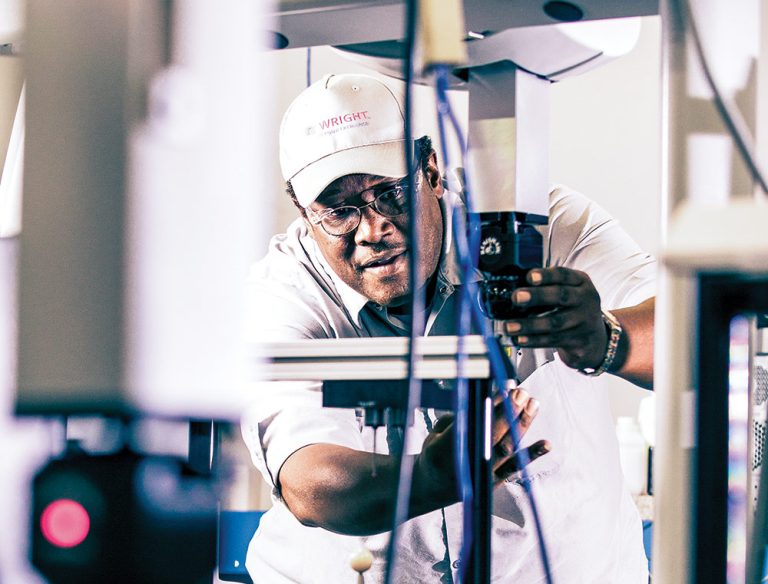 Tennessee has positioned itself among other states as a logistics leader, as 76% of the nation’s major metropolitan markets are located within a one-day’s drive of the state, with 60% being only an 11-hour drive or less away.

The Volunteer State makes the drive even more of a breeze, boasting some of the best maintained highways in America and eight interstates. In fact, Tennessee has more miles of the coast-to-coast Interstate 40 within its boundaries than any other state – 455 miles of I-40 run through 20 of its counties.

Also contributing to the state’s lofty transportation network are six Class I railroads, more than 1,000 miles of navigable waterways, including the Mississippi River, and multiple international and regional airports.

These airports include Memphis International, home to the FedEx Express World Hub and its nine cargo-only airlines, contributing to Memphis holding the title of second-busiest air cargo airport in the world for more than two decades.

FedEx’s Memphis operations, where it announced in 2019 that it would invest an additional $450 million in upgrades to a $1.1 billion modernization project launched in 2018, were on the front lines of the response to the COVID-19 crisis. When testing for the disease began across the country, the company was enlisted by the federal government, and in less than 24 hours, it had designed pickup and delivery operations to move more than 20,000 test samples from 50 test sites in a dozen states to labs in 10 states.

FedEx team members have been involved in everything from getting personal protective equipment into the hands of health care workers to delivering meals to school students in need.

Home to 16,700 distribution-related establishments that employ nearly 269,000 workers, Tennessee is a logistics powerhouse. A number of major companies maintain large distribution operations in the state, including Amazon, Under Armour and Walmart.

Between 2014 and August 2019, Tennessee saw $4.6 billion in new capital investment and the creation of more than 27,000 new jobs, further strengthening the state’s distribution and logistics sectors. Some of the companies contributing to the state’s growth include Academy Sports + Outdoors, Access America Transport, XPO Logistics, Saks Inc., Team 3 Logistics and Nike.

The state is a hub of logistics innovation that is fueled by a critical mass of talent. Chattanooga-based Kenco, the largest woman-owned, third-party logistics company in the U.S., opened Kenco Supply Chain Innovation Labs in 2015, where a dedicated team of innovation specialists collaborate with customers to identify, research and prototype leading-edge ideas and processes. The company expanded the lab operations in 2019.

During the COVID-19 crisis, a Chattanooga startup played a role in providing crucial information on the spread of the pandemic. Software developed by International Maritime Security Associates provided live, real-time tracking of the virus for mariners, giving them the most up to date information that helped them make better decisions protecting their crews, passengers and cargo worldwide.

As the state’s economy continues to grow, the trucking companies hauling these goods are also expanding. In Nashville, Western Express is moving forward with an $88 million expansion to its headquarters, with plans to create 225 headquarters jobs and hire more than 350 driving associates over the next five years.

JNJ Express, which was founded in Memphis in 1992, is redeveloping the vacant Delta Square Shopping Center site for its new corporate headquarters and operations campus, spending $83.6 million and creating 610 new jobs – most of which will go to drivers who company officials say will make about $70,000 a year.

In addition to renovating the 115,000-square-foot former shopping center, the company plans to spend another $63 million on new trucks.

The company, which provides transportation services for clients, including FedEx, UPS, Amazon, PepsiCo and Walmart, employs about 350 full-time truck drivers and 50 office employees, a number expected to increase.

“We are one of FedEx’s primary carriers and one of UPS’ largest independent carriers, and we are very safety conscious and fuel-economy conscious, so we don’t run old trucks,â€ says Steve West, JNJ Express director of information technology. “When you see the blue JNJ trucks around Memphis, they are all new trucks.”