Skip to content
Home > TN > Education, Careers & Opportunity > Tennessee’s Creative Force is One to Be Reckoned With 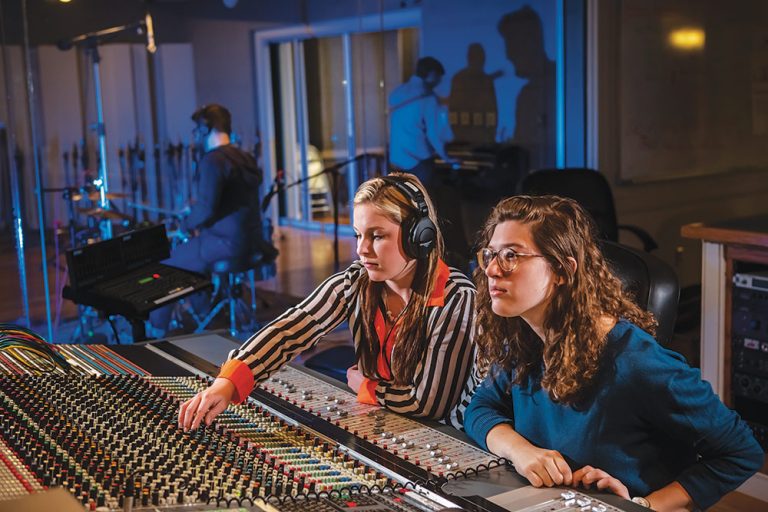 It’s no secret that that Tennessee’s deep roots in music have helped the state become one of the fastest-growing entertainment hubs in the U.S. More than 47,000 Tennesseans work in creative, tech and entertainment fields across the state.

With a critical mass of musicians and artists calling the Volunteer State home and a deep bench of technical talent and top-shelf production facilities, Tennessee is the ideal backdrop for creatives to bring their vision to life.

“Every producer and director is looking for a place with authenticity, and Tennessee has a lot to offer,â€ says Bob Raines, executive director of the Tennessee Entertainment Commission, which has launched a wide range of initiatives to showcase the state as a relevant market for multimedia properties and increase high-paying job opportunities in the creative and technology fields.

“A television series that shoots on location such as Nashville or Bluff City Law not only infuses $50 million into the city immediately, but they spend 10 to 12 months hiring local people with salaries ranging from $80,000 to $100,000 per year,â€ Raines says.

The Tennessee Entertainment Commission maintains a statewide workforce talent directory that includes every type of creative and technical category a studio might need to develop projects locally. This database is a free resource for residents who have experience in the creative space and contains approximately 10,000 images so that prospective partners can see what the state looks like and choose the best spot for their needs.

“We also offer intergovernmental community liaison services to connect studios with the appropriate offices so that they can get the permits they need,â€ Raines says. “We want them to walk away from Tennessee saying that it was so easy to create here that they will want to come back.”

When iHeartMedia needed to find a place to build its second digital headquarters, the company chose the perfect spot in a city that is synonymous with the recording industry: Nashville.

Darren Davis, president of iHeartMedia, says Nashville is a vital city that had all of the elements the company was looking for – rapid growth in the tech space, a huge historical connection to music and talent that continues to flock to this hip and developing market for its quality of life, lower cost of living and fun opportunities.

“Nashville’s music culture, eccentric vibe and lower cost of living continues to attract young and inspiring millennials, eager students and startups,â€ he says. “Nashville is also home to more than two dozen universities and colleges with a number of highly regarded technology programs fostering some of the strongest talent in the country today.”

With close proximity to other major players such as the Discovery Network in Knoxville and RFD Television in Nashville, Davis says the competition made Tennessee even more attractive for their new hub, which will open this year.

“The talent pool improves when there are several exciting companies hiring tech talent,â€ he says.

But it’s not only the big cities such as Memphis and Nashville that are encouraging the artists to share their talents with Tennessee. Smaller communities are also flexing their creative muscles and developing diverse art scenes. Endeavors such as the Columbia Arts Building in Maury County and Stove Works in Chattanooga are becoming a haven for creative enterprises.

Charlotte Caldwell, founder and director of Stove Works is transforming the former stove factory into a contemporary arts space that will exhibit local, regional and national artists while educating the public about this unique medium when it opens in fall 2020.

“Everything we do is designed to lower the barrier of art as a visual language,â€ she says. “We want to encourage understanding of work that is often topical but apolitical and for people to build a personal relationship with it.”

Caldwell says Chattanooga is a rich and collaborative city, and thanks to its close proximity to other hubs, it offers some attractive geography in addition to a budding arts scene.

“If you are looking for a day trip or a place to call home, this is a great community for artists,â€ she says.

Tennessee offers production companies incentives such as a cash rebate in the form of 25% grant on all Tennessee labor, production services and music for in-state expenditures. The state also features 73 different production-specific programs offered at 35 higher education institutions across Tennessee.