Spend a fun-filled weekend in the Volunteer State. 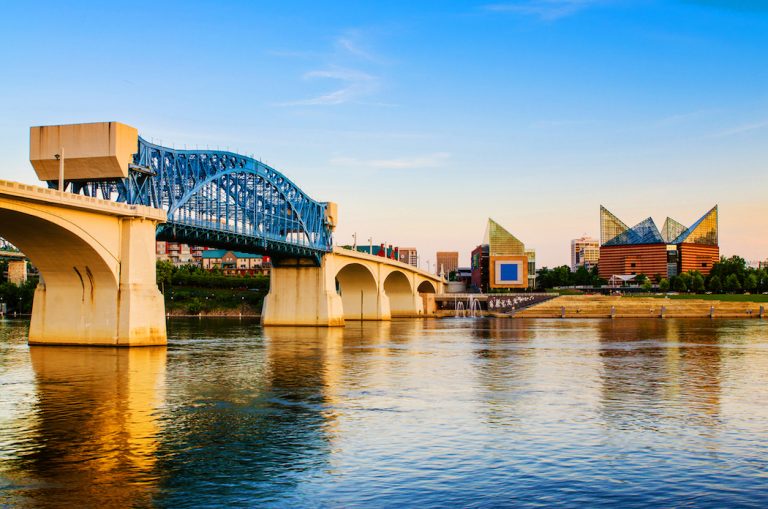 Whether it’s good music, mouth-watering food or the great outdoors you crave, Tennessee has you covered. Take a weekend jaunt to the any of the Tennessee’s three regions and experience all the Volunteer State has to offer.

If it’s one thing Tennessee has mastered, it’s the art of the meat and three. And perhaps nobody does it better than Betty Joyce ‘B.J.’ Chester-Tamayo, owner of Alcenia’s Southern Style Cuisine. Named for Chester-Tamayo’s mother, the restaurant serves us soul food staples, such as fried pork chops, catfish sandwiches, fried green tomatoes and sweet potato pie. Alcenia’s is best known, however, for its namesake’s famous apricot, peach, pear and fig preserves.

Mention Memphis barbecue and only one word comes to mind – Rendezvous. Charlie Vergos Rendezvous got its start in the basement in back alley of downtown Memphis. A city favorite for more than 60 years, Rendezvous’ Memphis style dry rub ribs are unrivaled. Today, you can still find Rendezvous in the alley between B.B. King Blvd. and Second Street.

Memphis holds close ties to two legendary Kings – Elvis Presley, the king of rock and roll, and Civil Right leader Martin Luther King, Jr. Take a tour of Graceland, Presley’s 13.8-acre estate, to get a glimpse into his life and pay tribute to his musical legacy. Housed in the Lorraine Motel, where King was killed, the National Civil Rights Museum features more than 300 artifacts, films, interactive displays and permanent exhibits that trace the history of African-Americans and the Civil Rights movement in America, from slavery to today.

Downtown Memphis comes alive at night, especially on Beale Street, one of the nation’s most iconic streets and where the blues were born. Stop in one of the many nightclubs that line the street to hear both budding and professional musicians carrying on the tradition.

The Peabody Hotel has been a part of Memphis history since 1869. Known for its elegance, the Peabody offers guests a full menu of luxury amenities, including a spa, athletic club and pet-friendly rooms. The Peabody is best known for the daily Peabody Duck March which has become synonymous with the hotel’s brand. Twice daily, the hotel’s feathered residents – five North American mallard ducks – march to and from their home in the fountain in the hotel’s lobby.

Nashville has gained a reputation for hot chicken, fried chicken seasoned with a blend of spices and cayenne pepper, and several restaurants have popped up serving the Music City specialty. But if you are going to sample Nashville hot chicken, you should sample the original, Prince’s Hot Chicken Shack. The Prince family has been serving up the atomic delicacy for several decades. Choose from five levels of spiciness, from mild to a stomach-numbing XXXhot.

There are plenty of restaurants in Nashville worth standing in line for, but the Pancake Pantry tops the list. This neighborhood gem has been a local favorite since 1961. The key to the eatery’s success is the pancake batter and syrup made fresh daily from the original owner’s secret recipe. Open for breakfast and lunch, the Pantry serves up pancakes more than a dozen different ways, including with diced apricots and apricot lemon compote or fresh blueberries and chocolate chips.

Nashville easily earns its Music City USA moniker. On any given night, you can walk down Broadway and Second Avenue downtown and hear live music of all genres drifting out of the many honkey tonks and nightclubs than line the streets. To learn how it all began, visit the Country Music Hall of Fame and Museum, one of the world’s largest museums dedicated to American music. Then head over to the Mother Church, the Ryman Auditorium, which housed the Grand Ole Opry from 1943 to 1974. The Ryman still hosts musical acts and is said to have some of the best acoustics in the country.

Can’t make a show? You can take a self-guided or backstage tour. Home to more than a half dozen major colleges and universities, Nashville has been dubbed the “Athens of the South,â€ so it’s only fitting that a visit to Nashville include the Parthenon, a full-scale replica of the Parthenon in Athens, Greece. Built in 1897 as part of the Tennessee Centennial Exposition, the Parthenon features a 42-foot tall statue of the goddess Athena. The Parthenon is in Nashville’s Centennial Park and is open to the public Tuesday-Sunday.

The historic Hermitage Hotel is one of downtown Nashville’s most cherished landmark. The hotel’s Beaux-Arts architecture, which blends French Renaissance and classic Italian styles, projects the glamor and luxury associated with the turn of the 20th Century. Built in 1908, the hotel became a favored meeting place for the city’s rich and famous. Other notable guests include Charlie Chaplin, Babe Ruth and Presidents Woodrow Wilson, John F Kennedy and Bill Clinton.

If you are looking for fresh, made-to-order food at a good price, look no further than Chattanooga’s Aretha Frankensteins, a diner serving breakfast, lunch and dinner. For breakfast, try some of Aretha’s famous buttermilk pancakes or six-cheese omelette with biscuits and gravy. Lunch and dinner fare includes a wide range of sandwiches, quesadillas and burritos.

The Blue Plate bills itself as a metropolitan diner, serving diner fare with a farm-to-table twist. Take, for example, the chicken and pancake – locally sourced hormone-free, hand-dipped buttermilk fried chicken served with a pancake and hashbrowns – or the shrimp mac and cheese.

You don’t have to be a kid to enjoy a trip to the Tennessee Aquarium. Located downtown on the bank of the Tennessee River, the aquarium boasts more than 12,000 animals and was once the largest freshwater aquarium in the world. Exhibits are dedicated to regional habitats, such as Delta Country, which features species from the Mississippi River delta, and the Nickajack Lake tank filled with fish from the Tennessee River.

If you are traveling to Chattanooga by car, you might be lucky enough to spot one of the few remaining iconic “See Rock Cityâ€ barns advertising the attraction. The roadside attraction along Lookout Mountain guarantees you can see seven states from its top. While at Lookout Mountain, you can also tour the underground caves of Ruby Falls, zipline or take a breathtaking ride on the Incline Railway. Back in town, make shopping an adventure and you search for treasure in the Bluff View Arts District.

Housed in the old terminal station of Chattanooga’s Union Station, the Chattanooga Choo Choo Historic Hotel has become as legendary as the song for which it’s named. Guests can take a trip through time and stay in a vintage Pullman train car or in the newly renovated MacArthur Building, named for the last Southern Railway steam-powered freight train that traveled to Chattanooga.