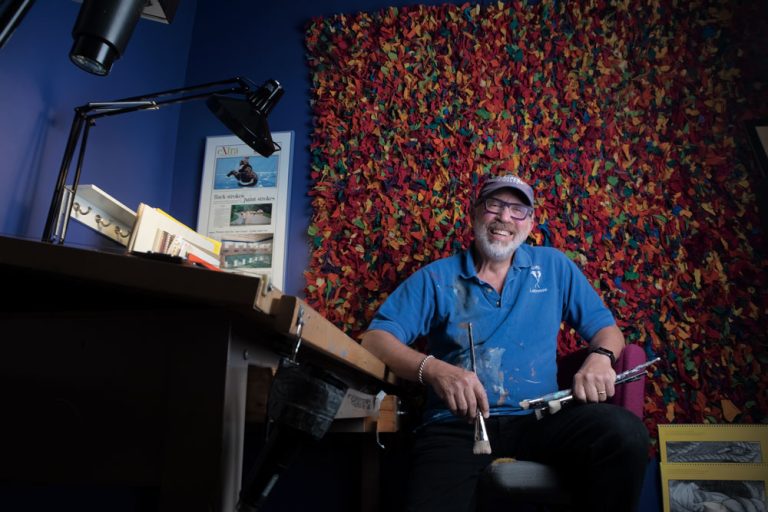 It’s one of those chicken-or-egg deals when it comes to the growth of the arts community in Franklin and Williamson County.

Did the artists arrive first and draw more of their kind, or is it simply that the area itself, with its various lifestyles, attitudes, historic landmarks and dedicated green space, that draws artists on its own?

Regardless of which scenario you hold true, the arts aid the health, growth and community psyche – represented by guitar-pullers at local pubs or the historic 300-seat theater, murals covering walls inside and outside buildings, an acclaimed tailor to the stars and a growing alliance of visual artists intent on preserving the rural majesty, just to list some.

A significant place where arts and their community impact intersect is at the Franklin Theatre, the lovingly restored old movie house-turned-concert venue and community HQ on Main Street.

“We are Franklin’s living room,â€ says Dan Hays, executive director. “This is the space where people come to gather and experience what we are about, culturally, socially, charitably and in so many other ways.”

Hays, who takes particular pride in the theater’s commitment to providing a venue for charitable events, was drawn to his role here after a long stint as executive director of the International Bluegrass Music Association.  Since he already lived just a mile or so from the theater, it was simply an accident (and a world-class mandolinist) that led him to become integral in its development.

“Literally, the day my resignation with IBMA became official, I was Googling to see that a Sam Bush concert was at the Franklin Theatre,â€ he says. As a result, he discovered a life-changing opportunity that would allow him to aid in the city’s cultural growth while also contributing to charities and the city’s bottom line.

“I saw [Franklin Theatre] needed an executive director [and inquired],â€ he says, and inquired. “I was flattered to be asked a few questions and be able to gain some insight as to what their vision was. I was taken with their overall goal to be the best 300-seat, live-music venue in the world.”

The Franklin Theatre has become known as a destination for touring artists, a great venue to showcase the Middle Tennessee music community and, not least of all, a place where charitable giving and charitable givers are entertained.

Charities or artists who wish to help raise money for charities come to the theater and turn the organizing, promoting, ticket-selling and other business functions over to Hays and his staff, who gladly help them achieve their goals.

In total, the theater has a $7.4 million annual economic impact.

‘More Stars in the Sky’

“There’s this vibe you can’t put your finger on,â€ says Gayden, who as a youth commuted 20 miles from Nashville to attend Battle Ground Academy. He grew up to become a major force in Nashville’s legendary rhythm-and-blues scene as well as one of Bob Dylan’s most-talented sidemen (guitar on “Blonde on Blondeâ€). He’s a heralded musician in his own right and has earned plenty of acclaim as a songwriter, with the biggest a co-write of “Everlasting Loveâ€ with Buzz Cason, another veteran Nashville rock ‘n’ roller. Recorded originally by Robert Knight back in 1968, there have been notable covers.

Gayden went on to write songs recorded by such notables as Clifford Curry, U2, Gloria Estefan, Bobby Bare and Porter Wagoner. And his guitar skills were used not only by Dylan, but by Elvis, the Allmans, Leonard Cohen, Hoyt Axton, Kris Kristofferson, Simon & Garfunkel and more. He’s currently working on a documentary about Nashville-based R&B stalwarts The Valentines.

He also continues to make music with his own family, including his acclaimed folk musician daughter Oceana, who is an assistant principal at Brentwood High School.

Williamson County, he says, helps him be creative just because of people he encounters.

“There are so many professional athletes and music stars in this community. And it’s not uncommon to see Nicole Kidman and Keith [Urban, her husband] at the next table. Sights like that happen more here than any other place.”

Plus he credits the greenspace for his upbeat personal tempo.

“There are trails through the forest that go for over 20 miles right outside my door … There is more space between homes here, thus we have more stars in the sky,â€ Gayden says.

Speaking of stars, it is that type of outdoor wonder that drives visual art star and resident Anne Goetze, whose stunning plein-air paintings, photographs and videos captured while in the great, wide open, sparked something of a movement by other local artists.

Goetze moved from Nashville into rural Williamson County long ago in pursuit of personal peace and brush-stroke inspiration. While previously commuting here to bring her son to a small school in the Carter’s Creek Road area, she became seduced by the beauty of the countryside.

She even picked out a home – a chalet near the school – she dreamt would be her own one day. That dream came true shortly after the for-sale sign was hammered into the ground.

Now she spends her days on her seven acres as well as venturing into the other rural parts of the county near her home that’s seven miles from Franklin and three miles from Leiper’s Fork.

“This is one of the last corridors of Williamson County that has not been developed,â€ she says, noting that she is using her art to make people realize just what can be lost if the rural lifestyle gives way to too much development.

“There’re a lot of ways this affects my whole life. Nature being my inspiration, it’s spiritual food,” she says. “You look at creation and you know there’s a God. There can be so many problems in the world, and nature keeps you grounded.”

A Glittery Path to Williamson County

The quiet life of rural Williamson County is what fuels Manuel Cuevas before fashioning one-of-a-kind clothing for stars and anybody else who can meet his prices at his shop at 800 Broadway, on the edge of Nashville’s glittery honky-tonk strip.

Of course, he is best-known for the rhinestones and other forms glitter-and-scissor artistry that dressed the likes of Porter Wagoner, Little Jimmy Dickens, George Jones, Mel Tillis and Gram Parsons. Famously he convinced Johnny Cash that black was his color.

Cuevas’s work transcends genres, however. He’s dressed “the Jackson 5, Osmond Brothers, Prince, Elvis. Oh my God, I could go on forever,â€ Cuevas says. “Sinatra, Dean Martin. All those people … Dolly Parton, Gregory Peck to whatever. I [made] things for four presidents [Eisenhower, LBJ, Reagan and “Papa Bush”], mayors, governors. What can I tell you … they all come to me and I make clothes for them. One of a kind.”

After his beginnings in native Mexico, Manuel worked in Hollywood for Nudie Cohn, the godfather of rhinestone cowboys and cowgirls everywhere. None of his tailoring and designing is performed in his home on five acres in Bethesda, as he saves that all for his workshop in the city.

“When I go home it is to relax. Just like when I worked in Los Angeles, I lived in the mountains. I don’t like ambulance noise,â€ he says, adding that the hustle-bustle and noise is OK when he’s at work, but he comes home to Williamson County because, “I like deer, animals, I love the wilderness.”

A Splash of Williamson Everywhere

Mike Cooper, an acclaimed muralist, says the aura of the county is a huge part of the reason he has found comfort and inspiration here after moving 25 years ago.

A native Memphian, Cooper operates Murals & More from his 3,000-square-foot studio, which is 100 feet behind his family home and is its virtual twin.

Cooper’s work can be seen on on dozens of buildings and structures – see the underpass on Nolensville Road for the Nashville Zoo, for example – as well as on full-wall murals indoors, throughout the region and country. He says he came to this form of art after an original career that did not satisfy artistic urges.

“I was a contract, commercial, interior designer in my former life,â€ he says, noting that for about 20 years his job revolved around office interiors and furnishings. “I was divorced and living in an apartment in Memphis. One day I was sitting in that apartment and I said ‘that wall needs something.’ So I did the whole wall as a mural of ‘Calvin and Hobbes,’â€ Cooper says.

The next day his future wife, Mickie, and future stepchildren stopped by his apartment and he says she immediately “knewâ€ what Cooper’s future should be. He moved to Nashville and stayed in interior design for a while, but Mickie convinced him to follow his muse.

“With her encouragement, I changed careers,â€ he says. “She does everything except paint. She’s the brains behind this outfit,â€ he says, laughing. “Her mantra to me is: ‘Go out and paint.’â€

His first career helped him make contacts. “I knew most of the architects and designers around [Nashville], so I put out the word and I started doing the work. Now I’m painting entire sides of buildings. We’ve done this stuff from coast to coast.”

One of his “regularâ€ contracts is the ever-changing Vanderbilt coaches mural on West End, by the way.

“I think as far as the arts in general, there is a very creative atmosphere here. Very laid-back, with a lot of areas having a rural feel to it,â€ Cooper says.

He also points to the fact many musicians live in the county and that is a boost for all types of artwork.

“I think with all the musicians, you’ve just got that frame of mind. The whole setting. It’s so relaxed, so peaceful,â€ Cooper says. “And there are lots of visual artists here. Most are traditional. A lot of animals and trees and nature scenes. It’s very nice artwork.”

He also is involved with efforts to boost the public arts presence in Williamson County.

“I’d love to paint some walls for them,â€ he says. “Everybody seems excited to get some sculpture, water features. And murals.”