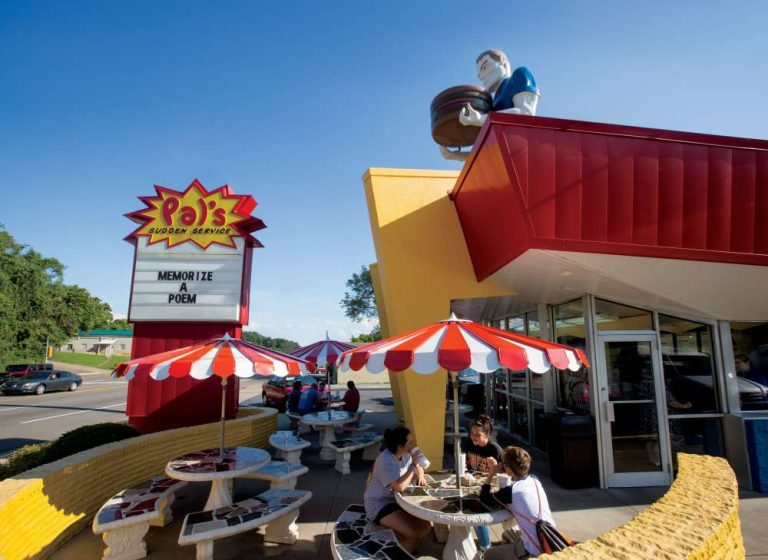 It has been more than 60 years since Pal’s No. 1 opened in Kingsport. In the decades since, the regional chain has grown to 29 locations in Tennessee and Virginia, and in 2001 it became the first restaurant to win the prestigious Malcolm Baldrige National Quality Award, which is presented by the president of the United States.

Much of the company’s success can be attributed to its coaching and training programs, as well as the way it differentiates itself from other quick-service restaurants.

“We try to make sure we excel at what we are doing by keeping things simple,” explains Pal’s CEO Thom Crosby, who has been with Pal’s for 36 years and in his current role since 2001. “The company was founded on the idea of providing the best quality hamburgers, hot dogs, and chipped ham sandwiches – and to be the fastest at it. We aren’t trying to be all things to all people; we stick to our knitting.”

Typically, though, it’s what Pal’s and its employees do on a day-in, day-out basis that earns them high praise – from customers and the business community alike.

“You know when you go through the line at Pal’s that you are going to get what you ordered and it’s going to be quick,â€ says Miles Burdine, President & CEO of the Kingsport Chamber of Commerce. “If you pay attention, you will notice the little things they do that other fast food restaurants don’t.”

Whenever my children – and many other children who have gone away to college – come back home, Pal’s if often the first place they stop.

Excellent to the Last Detail

“When we take an order, we do it face-to-face,â€ emphasizes Crosby. “There are no speakers, there are no menu boards. We build a rapport with the customer and it helps us make sure we are accurate. A typical QSR makes one mistake every 15 orders; we have documented proof that, on average, we make a mistake one out of every 3,600 orders.â€

The chain also stresses positive reinforcement when coaching its employees, and considers a “100â€ to be the only passing score.

“Anything less than 100 percent and we believe you are building automatic failure into the system,â€ says Crosby, adding the company’s simple, robust methods can get each and every employee to 100 percent.

The company’s processes are so highly regarded that it opened Pal’s Business Excellence Institute, where it trains other companies – including countless national brands outside the food service industry – on the management principles and practices that have made Pal’s so successful.

“Between 300 and 400 different organizations will receive training from us each year,â€ says Crosby. “Our approach is sharing ‘Here’s what we’re doing, here’s how we’re doing it, here is the data that proves the idea is rock-solid and it works if you execute, and here are the kind of results you can drive.’â€

“Founder Pal Barger is one of the most community-minded people I have met,â€ says Dennis Phillips, who served as mayor of Kingsport between 2005 and 2015. “He bought and donated a building so our community college could have an automotive service school. He purchased the digital scoreboard for our local high school. And he provided the funds for a building [that houses a restored, antique carousel] named Pal’s Roundhouse. He doesn’t talk about his day-to-day contributions, but I can tell you that his contributions to this community are enormous – and have been for many years.”

Tellingly, many people develop an even greater appreciation for Pal’s Sudden Service when they move away from the area.

“Whenever my children, and many other children who have gone away to college, come back home, Pal’s is often the first place they stop,â€ says Burdine. “When they pull off the Interstate they will call home and say, ‘I’m stopping at Pal’s. Does anybody want anything?’ That’s a common story among many families in our community.”