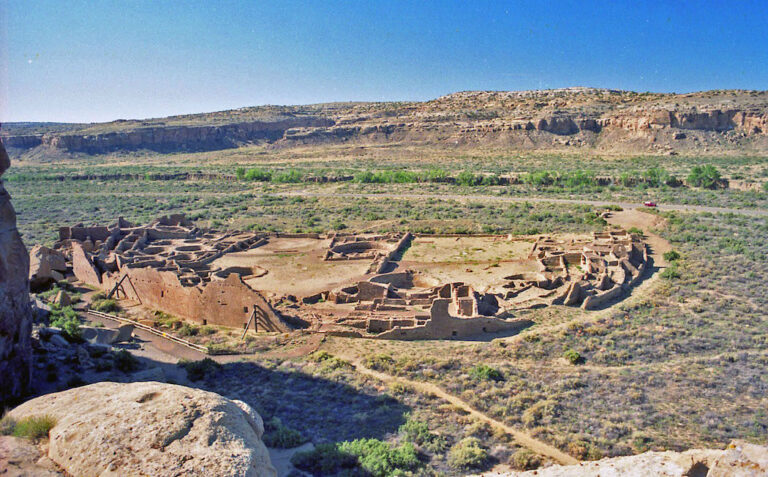 New Mexico / Courtesy of mksfca under a CC 4.0 license.

When you think of ancient sites, where does your mind go first? Chichén Itzá in Mexico? The Parthenon in Greece? The Nazca Lines in Peru? Well, you should think no further than the U.S. itself, because spread across this country are great numbers of ancient archeological sites. Some are enormous, or incredibly complex, or incredibly old—and all are well-worth a visit.

The 10 Best Cities for Historical Preservation

So before you spend thousands of dollars to see sites abroad, why not see these sites at home? America’s history started long before 1776, and it’s calling your name.

Want to see the one of the most important pre-Columbian cultural and historical areas in the U.S.? Chaco Canyon was a major center of culture for the Ancestral Puebloans, and their complexes were built along a 9-mile stretch of canyon floor. Some of the buildings’ walls aligned with cardinal points, while other aligned with the 18.6-year lunar cycle. And many of them are enormous, both in length and underground and aboveground structures.

Who were the Ancestral Puebloans?

Around 100 CE, the Ancestral Puebloans (also known as the Anasazi, a Navajo word that has been translated as “the ancient enemy”) civilization developed in the Four Corners region of the U.S. Spanning some 1,500 years, their history is long and varied; around 750 CE, the construction of large buildings like those at Chaco Canyon began, and around 1150, they began to create cliff dwellings. Today, there are around 75,000 descendants of the Ancestral Puebloans, spread now between the modern Pueblo tribes, including the Hopi, Zuni, Acoma, and Laguna.

Occupied around 1000-1450 CE, Moundville Archaeological Park is believed to be the regional political and ceremonial center of the Mississippian culture. It currently spread across 185 acres, but used to be a village that occupied 300 acres on a bluff overlooking the Black Warrior River. The village was surrounded by a bastioned wooden palisade, which contained 26 earthen mounds surrounding a central plaza. You can visit the mounds and the recently-renovated museum, which houses many of the site’s artifacts.

Who were the Mississippians?

The Mississippian culture was the last major prehistorical cultural development in North America. It comprised of a huge network of Native Americans, spread across what are now Mississippi, Alabama, Georgia, Arkansas, Missouri, Kentucky, Illinois, Indiana, and Ohio. There were smaller extensions up into Wisconsin and Minnesota, as well into the Great Plains. Settlements were governed by priest-rulers, and are famous for their enormous public works—mounds that dominate the landscape today

More than 3,000 years old, Poverty Point is a mysterious site found in northeastern Louisiana. Built by the Poverty Point Culture, it’s filled with mounds and concentric rings made of earth that take up some 900 acres, and millions of artifacts have been found onsite. The site was created over the course of 600 years (from about 1650 to 700 BCE), taking more than five million hours of labor to build. Despite knowing all this, though, no one exactly knows what the site was used for, or why it was eventually abandoned.

What is the Poverty Point Culture?

Flourishing around 2,000 BCE to 600 BCE, the Poverty Point Culture settled across Louisiana, Mississippi, and Arkansas. While they were often spread out in small groups, there were regional centers where many lived—like Poverty Point, the largest known center.

The Best Places to Live in Louisiana

Serpent Mound is the largest serpent effigy in the world, coming in at 1,348 feet long. It also poses a bit of a mystery since the mound itself has so far turned up no artifacts relating to a particular culture. However, there are two burial mounds nearby that are attributed to the Adena culture (800 BCE – 100 CE), and some believe that they are also responsible for the Serpent Mound. The only thing keeping it from being a more widely-held theory, however, is its age. According to a 1991 study, radiocarbon dating put the age of the mound as younger than the Adena culture, at about 900 years old—leading people to postulate the Fort Ancient culture (1000-1650 CE) built it. But a new carbon date in 2014 put it back in the range of the Adena culture, at around 300 BCE. #ScienceProblems

Nearby, the Serpent Mound Museum offers loads of information about the site, the geographical history of the area, and the Adena culture.

Who were the Adena?

The Adena culture is a broad term relating to a pre-Columbian Native American group spread across Ohio, West Virginia, Kentucky, and Indiana. In this area, they were the first people to transition from hunting and gathering to creating settlements and farming. They are noted for honoring their dead in cone-shaped burial mounds, and some groups later became the Hopewell culture.

Built below overhanging cliffs by the Ancestral Puebloans, cliff dwellings can be found throughout Mesa Verde National Park. They date to as early as the 1190s, but were abandoned around 1300. Some are only one room in size, while others—like the Cliff Palace, or the Long House—are quite extensive.

They might as well rename this “CaHOLY COW!” because…who knew there was something so epic as on American soil?

Starting around 800 CE, the extremely sophisticated Mississippians began building mounds near what is now St. Louis, Missouri. The site, which was later named Cahokia, was part of one of the greatest cities of the world—it was larger than 1250 CE London, having a population that may have peaked at 100,000 people. There are more than 100 mounds that can be found there today (there were 120 or more originally), spread across 2,200 acres, making it the largest archaeological site in North America. There are also four circular sun calendars known as Woodhenge, as well as a dedicated museum.

California actually contains many versions of American Nazca Lines spread across the state, but the ones near Blythe, California in the Colorado Desert are a little different than the rest: They contain images of humans as well as animals. Some 3,000 years ago, they were created by scraping away layers of the desert to reveal the lighter soil underneath. There are several dozen human figures, with the largest at 171 feet long—so you’ll have to fly high above them in order to see them in their entirety. No one knows their purpose, or why they were created.

The Hopewell culture flourished near what is now Chillicothe, Ohio between 200 BCE and 500 CE. The Hopewell are characterized by what they built: earthworks like walled enclosures built in geometric patterns and mounds of different shapes. At Hopewell Culture National Historic Park, you can see six sites of Hopewell building, including some with walls up to 12 feet high that outline figures more than 1,000 feet across, or cones that reach 30 feet high.

Who were the Hopewell?

“Hopewell” refers to a large network political, economic, and spiritual beliefs and practices among different Native American groups. They are known for their building, as well as their broad network of contacts, which spread from the Atlantic coast to the Rocky Mountains. Through these contacts, the Hopewell were able to gather a large number of materials including shark’s teeth, obsidian, shells, mica, and copper.

So all of the sites above are maybe 3,000 years old—pretty impressive, right? Well, let’s up the ante by a few thousand years. North America is filled with sites left behind by the Paleoindians known as the Clovis culture—you know, the people who crossed the Bering land bridge and walked between ice sheets in order to move southward.

When you visit, there is a tree-lined dirt trail, which leads you to the site. You can do this tour yourself, or request a guided tour—and with advanced notice, physically-impaired visitors can request a driving tour. The museum that houses all the archeological materials found onsite—the Blackwater Draw Museum—is just a short drive away.

Who were the Clovis?

The Clovis culture is a prehistoric Paleo-Indian culture that arrived in North America some 13,000 years ago. They’re often characterized by their distinctly-shaped tools, especially their laurel-shaped Clovis points. They are generally considered to be the ancestors of most of the indigenous cultures of North and South America.

The Best Places to Live in New Mexico

For a long time, scientists believed that the Clovis were the first humans to people the Americas—until sites in the 1970s began to throw this theory into question. The Clovis were unable to cross the huge sheets of ice in the north before ~13,000 years ago, but sites older than that began cropping up. One of the biggest was Meadowcroft Rockshelter.

Meadowcroft is the longest-occupied site in all of America, and there is evidence that humans began camping there 16,000 years ago—a people now referred to as the pre-Clovis culture, who are thought to have sailed from Beringia. For some interesting perspective, at roughly the same time, someone in France was molding bison sculptures in the Le Tuc d’Audoubert cave; about 1,000 years later, wooly rhinos went extinct.

Meadowcroft, being such a famous and widely excavated site (and one of the oldest in the country to boot), is incredibly well-developed for visiting. Besides the massive rock overhang where the humans lived, which is sheltered under a massive building, the site also is host to several interpretive villages from other eras of its occupation, including a 16th century Eastern Woodland Indian Village and a 19th century village—meaning you more or less get to time travel across thousands of years and put yourself where humans ancient and modern once walked.

Who were the Pre-Clovis people?

The Pre-Clovis culture is generally believed to be the First Americans—as in, the first humans to populate the Americas. They arrived perhaps as early as 50,000 years ago, according to carbon dating at some sites, like the Topper site in South Carolina. They were hunter-gatherers with tools distinct from the Clovis.