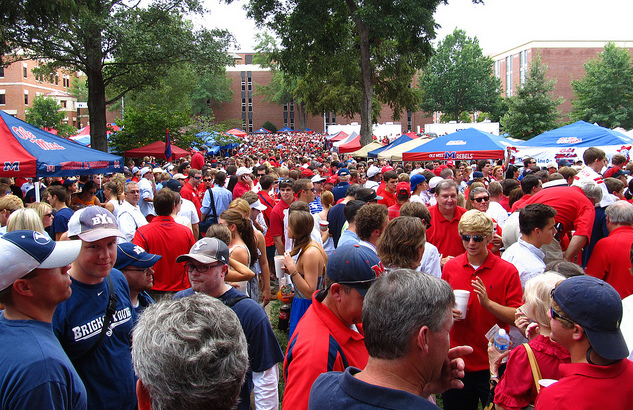 Naturally, every college football fan believes his or her school’s tailgate experience is the best. And it probably is, since so often, beauty is in the eye of the party-holder. From coast to coast, college tailgates have become almost as essential as the games themselves. In the mix, several U.S. cities tend to emerge when talk turns to the most prolific tailgate towns. What distinguishes them?

WITH HONORS: The Top 10 College Towns in America.

“A great atmosphere, amazing food, generous hospitality and rich traditions bring the best tailgates to life,” says Dave Kelly, a college sports superfan from Alabama who now lives in Tennessee and oversaw the now defunct rockytoptennessee.com fan site. You’ll find all of that and more at the following locales, which, among a cadre of contenders, rise to the top as our 10 best American tailgate cities.

You’ll find one of college football’s most unique experiences in Oxford, MS. Many consider The Grove, a 10-acre grassy area at Ole Miss, the prime tailgate destination. The party starts at 9 a.m. Friday on football weekends, highlighted by the Rebels’ raucous “Walk Through the Grove” two hours before kickoff on their way to Vaught-Hemingway Stadium.

Seattle, WA gets a little “husky” on game days. Fans at the University of Washington in Seattle are renowned for hosting stellar pregame parties. UDub faithfuls descend on picturesque Husky Stadium and its nearby campus streets by land or water, many of them docking boats stadium-side on Lake Washingon.

Badgers fans flock to Madison, WI on game days. Brats, brews and boisterous fans flood the streets around Camp Randall Stadium for Wisconsin home games. The fun ranges from the Badger Bash and beer bongs in the Regent Neighborhood to the must-see Jump Around celebration just before kickoff.

BEST of the BEST: See where Madison and other cities ranked on our Top 100 Best Places to Live.

Orange is the color in Knoxville, TN. In one of the few towns where boaters can dock or anchor beside the stadium, UT’s “Vol Navy” turns tailgating into sailgating on the Tennessee River, lashing boats together to share orange-and-white celebrations before taking the short riverwalk into Neyland Stadium.

Iowa City, IA soars when it’s football time. Home of the University of Iowa Hawkeyes, Iowa City takes tailgating and promises tasty fun all day long. Even if you can’t make it inside Kinnick Stadium to welcome the players to AC/DC’s Back in Black, the party festivities are well worth a visit.

Let’s not beat around the bush. South Bend, IN serves up what many football fans consider to be the ultimate college football experience. Irish pride shines as fans tailgate at Notre Dame, sharing in shamrock traditions that include green beer, march-outs and concerts by the 380-member Band of the Fighting Irish, ringing bells at the famed Basilica of the Sacred Heart and the team’s player walk into the house that Rockne built.

How big is the party in Jacksonville, FL each fall? Consider: The name of the annual football game the city hosts – the World’s Largest Outdoor Cocktail Party – doesn’t even mention football. Food, drink and revelry bookend the clash of the rival Georgia Bulldogs and Florida Gators (Oct. 31 in 2015).

State College, PA turns into one giant football party on game days. The scene is effervescent at Penn State, which features some of the largest tailgate fields in America, along with party/campout zone Nittanyville. Fans love to nosh on favorite pregame fare before cheering on the Lions in Beaver Stadium.

LOOKING TO MINGLE? Here’s the Best Cities for Singles.