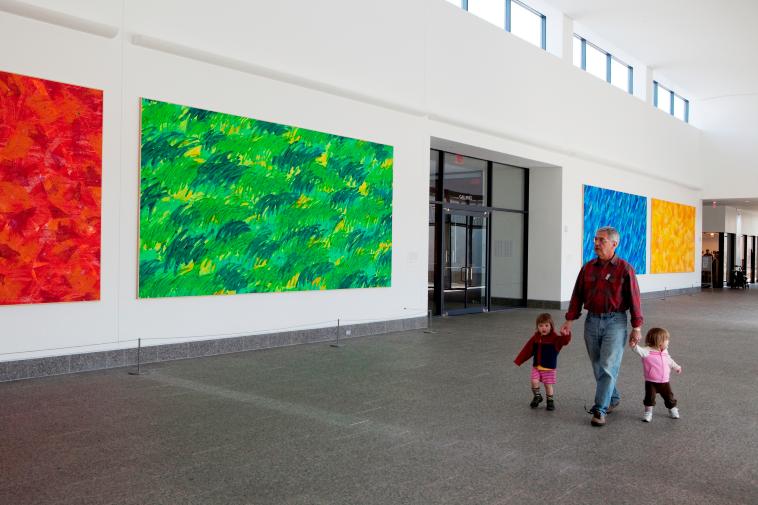 The museum’s mission is simple: To inspire a love of art and reading through picture books.

Local resident Eric Carle, the creator of more than 70 picture books, including The Very Hungry Caterpillar, founded the museum with his wife Barbara in 2002 to create a museum in the U.S. that would honor picture books both as works of art and for their educational value. Hailed as the only full-scale museum of its kind in the country, The Carle includes a collection of more than 10,000 picture book illustrations, three art galleries, an art studio, a theater, and picture book and scholarly libraries.

The museum’s sun-filled art studio features long tables and art supplies for visitors young and old to create their own works of art. The reading library is a comfortable space that hosts popular children’s book authors and illustrators such as Eric Carle, Mo Willems, Diane deGroat, Norton Juster and Jeff Kinney, and offers reading times in which children are asked to think about what happens next in a story.

In 2013, the museum received the Commonwealth Award for Creative Learning, the state’s highest award for educational programs.

“We consider ourselves both an important local cultural institution and a significant center, internationally, for the enjoyment and study of picture books and illustration,” says Alexandra Kennedy, the museum’s executive director.

Each year, more than 50,000 people from throughout the world visit  the museum, which has mounted nearly 100 exhibitions including The Wonderful Art of Oz and the upcoming Madeline at 75: The Art of Ludwig Bemelmans. One gallery, dedicated to Carle’s works, tells the story of his life through his artwork from childhood into adulthood.

“Children and adults all over the world have a common thread of how Eric Carle has inspired them,” says Courtney Waring, The Carle’s director of education. “Picture book art is popular because it is so accessible.”

In addition to its popularity with visitors from other countries, local children and adults have embraced their museum, located in the Pioneer Valley, a region known for its many resident authors and illustrators.

The museum, built aside an apple orchard next to Hampshire College, maintains a focus on education and offers professional arts integration training for educators, as well as four on-site graduate programs in children’s literature in collaboration with Simmons College. Waring says the museum takes its programs to local schools and also sends its educators to train teachers throughout the country.

“The Carle is farther than our usual field trips, but the experience is so worthwhile,” Funk says. “A visit connects the thrill of reading to the artwork and engages even the students who don’t think they are interested in reading.”