Give dear old Dad a true treat and take him to one of these macho towns. We searched for the most manly cities in America and think you'll be surprised by what we found. 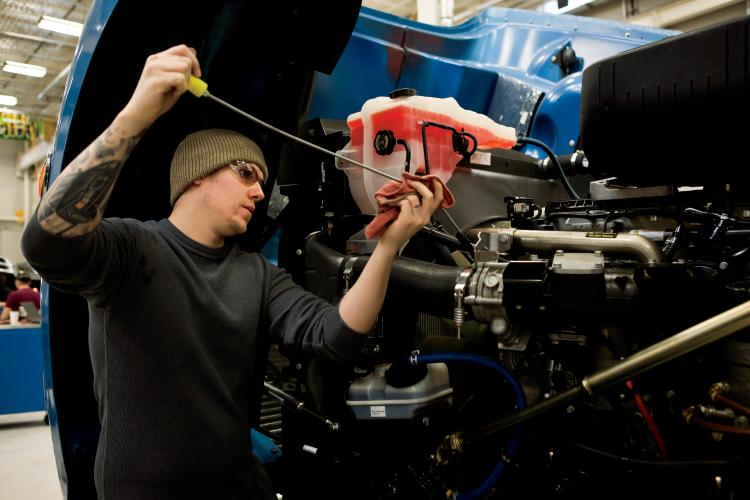 You may judge a city’s masculinity by the number of pro sports teams, bars, home improvement centers or gun owners it has. Others might study the percentage of men vs. women. We took a different route to arrive at the Top 10 Manly Cities.
When considering which places are the “most manly” we looked at the experiences a city can provide and the feeling visitors leave with. We sought out places that provide a sense of wonder and where the attention of even the gruffest of men would be held. That meant steering away from the beaten path that leads to the most popular vacation destinations and blazing a new trail. These cities are so manly they must put testosterone in the water.

Little boys grow up playing cowboys and Indians. It’s a classic tale that never fails to entertain. It’s action-packed and comes complete with a cool hat. Let Dad relive his Western childhood fantasies with a trip to the Rodeo Capital of Wyoming: Gillette, where cowboy ideals are alive and well at the city’s many rodeo events. It’s also home to one of the largest event centers in the country – CAM-PLEX and several coal mines inhabited by huge cranes and dump trucks.

Manly Things to Do in Gillette, WY:

Check out more delicious restaurants in Gillette, WY and in surrounding Campbell County.

A night out in Nashville’s neon-lit Broadway district is a country-lovin’ man’s dream. But a Nashville day is just as man friendly, with professional sports on tap like hockey (Nashville Predators) and football (Tennessee Titans) to keep him busy. Nashville, TN, was dubbed “America’s Manliest City” in 2009 by the makers of the snack food COMBOS. A high dose of NASCAR lovers and nearby hunting and fishing spots give this town some true grit.

Read about more hot chicken restaurants in Nashville to toughen up your tastebuds.

Before the crowds, before Graceland, before there was a King, there was Tupelo, MS. The city celebrates the music legend’s early years at Elvis Presley’s Birthplace. Presley was born in this manly town on Jan. 8, 1935, in a two-room home that his father built. Each year, more than 80,000 people visit the home, and we’re sure Dad would love to be one of them. You know there has to be some machismo here if it produced a star who thousands of women screamed about.

Beer is the drink of choice for a true man’s man. And Bend, OR, is a beer-lovers paradise. Known for both its batch of world-class breweries and superior cycling trails, visitors can enjoy the best of both worlds on the Bend Ale Trail. When you’ve had your fill, head for the rapids and take a whitewater rafting trip down one of the many nearby rivers. Bend is also famous for its biking scene and plays host to a number of professional competitions.

If you’re looking for a rugged yet refined destination then Bismarck, ND, is your place. Clinging to the prairies is that “frontier” feel, while downtown provides a sense of the genteel. The Rough Rider himself, Theodore Roosevelt, once said that if not for his experiences in North Dakota he wouldn’t have had the gumption to become president. Bismarck is home to half a dozen historic sites, including military forts, more than 235 miles of snowmobile trails and is within driving distance of 18 golf courses. Bismarck offers great fishing along the Missouri River and ample places to hunt. It’s a sportsman’s paradise no matter what the sport.

In his hit song Kansas City, Wilbert Harrison croons about the city’s crazy little women, but it’s the men who go nuts for what’s in Kansas City. You’ve got all three major sports covered (football, baseball, basketball), casinos, mouthwatering steaks, legendary barbecue, an amazing boulevard system, stunning architecture, a popular theme park and lots of jazz. It’s also home to a Harley-Davidson plant, a NASCAR speedway and an IRS service center. Sure sounds like a manly town to us.

Another thing most menfolk like is the supernatural. Well, Colorado Springs has the Garden of the Gods, an unbelievable array of breweries and pubs, and out-of-this-world adventures that range from mountain biking and horseback riding to panning for gold and extreme sports. It’s a spot to get your testosterone and adrenaline seriously flowing.>

In his hit Okie from Muskogee, Merle Haggard helped to define Muskogee’s vibe as “a place where even squares can have a ball.” So what makes Muskogee a great place to be a man? Well for starters, it’s surrounded by some of the best fishing holes in the country. Then there’s the USS Batfish Submarine & Military Museum, Castle of Muskogee, casino, golf courses, maritime activities and plenty of places to drink a beer and listen to music. On top of that, Muskogee is quickly becoming a destination for motorcycle riders to cruise along asphalt rollercoasters.

Read about more restaurants in Muskogee.

Want to get a man’s attention? Try putting the word BIGGEST in front of anything. Fort Worth, the 16th biggest city in the United States, is the ultimate macho town. It’s located, of course, in the biggest state of the lower 48. Fort Worth is a city of cowboys and culture, music venues and home to some really big stuff, like a huge haunted house, honky-tonk and air museum. Don’t leave without sticking your feet in a pair of cowboy boots.

Don’t miss out on other Fort Worth food options.

In 2010, Charlotte, NC, was named “America’s Manliest City” in a study done by the maker of the snack food COMBOS. Salty snack sales accounted for some of the ranking. We think it’s a manly city because of its sports scene, abundant outdoor adventures, motorsports, and strong selection of food and restaurants that slap a thick steak on their grills. Charlotte, a.k.a. the Queen City, is home to the largest man-made whitewater river and one of the largest outdoor climbing structures in the U.S. It’s also home to the NFL’s Carolina Panthers, the NBA’s Charlotte Bobcats and eight other pro sports teams (including roller derby), the NASCAR Hall of Fame, a racetrack and the nation’s largest financial institution – Bank of America.

Find more things to do in Charlotte, NC.

Check out more of our Best Places Lists.