Skip to content
Home > Food Scenes > The Midwest Does Breakfast Better: 9 Mouthwatering Dishes That Prove It

The Midwest Does Breakfast Better: 9 Mouthwatering Dishes That Prove It

Quilted by farms, no wonder mornings are fresher – and tastier – in America’s heartland. Breakfast poutine, anyone? 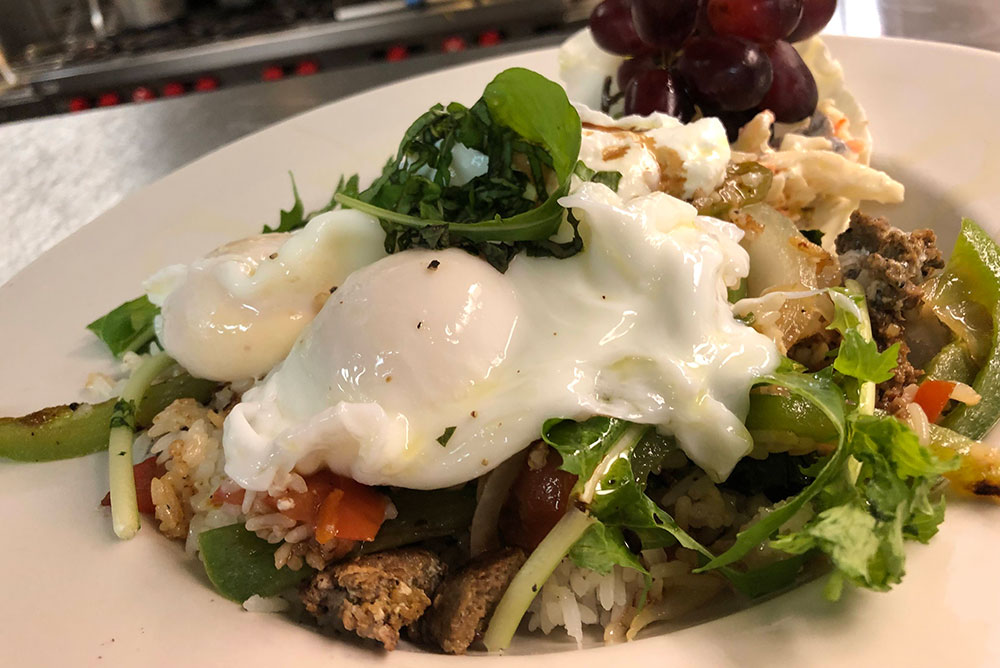 Driving across the Midwest, it seems like you never go more than 30 minutes without passing a farm or two – or more. And the chefs here know it. They’ve been using local ingredients long before the farm-to-table craze became a craze.

All those fresh finds make mornings worth getting up for, especially when you pair them with a healthy dose of culinary creativity.

Get your taste buds ready (and your map out) for these heartland breakfast favorites that show when it comes to the most important meal of the day, Midwesterners know how to make a mouth-watering meal. 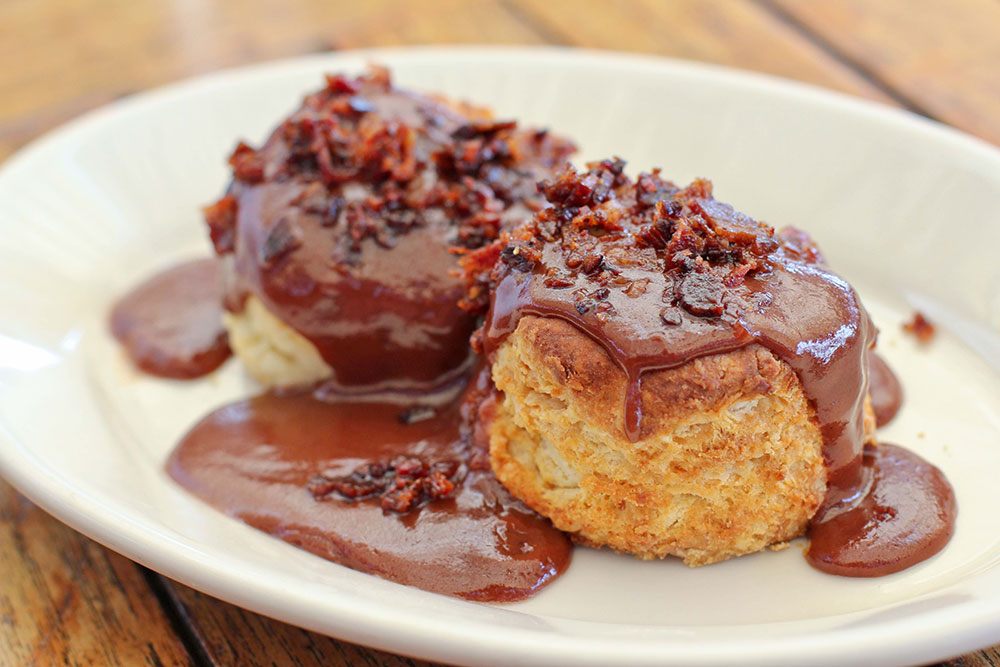 What started as a small deli in 1982 has grown to an Ann Arbor, MI, institution, with a restaurant, bakery, creamery and more dotting this college town. For breakfast, Zingerman’s Roadhouse has an extensive menu of locally sourced choices. Perhaps one of the most unusual is the Georgia Grits ‘N’ Bits Waffle. The buttermilk waffle is stuffed with grits, cheddar cheese and a double dose of bacon – Applewood smoked and peppered. Slather the warm waffle with Michigan-made farm butter and maple syrup. Another favorite for those who can’t quite decide between something sweet or savory, is the Biscuits & Chocolate-Bacon Gravy (yes, chocolate-bacon gravy!). Pillowy buttermilk biscuits are coated in a gravy concocted with bacon and chocolate. Now that’s a breakfast! 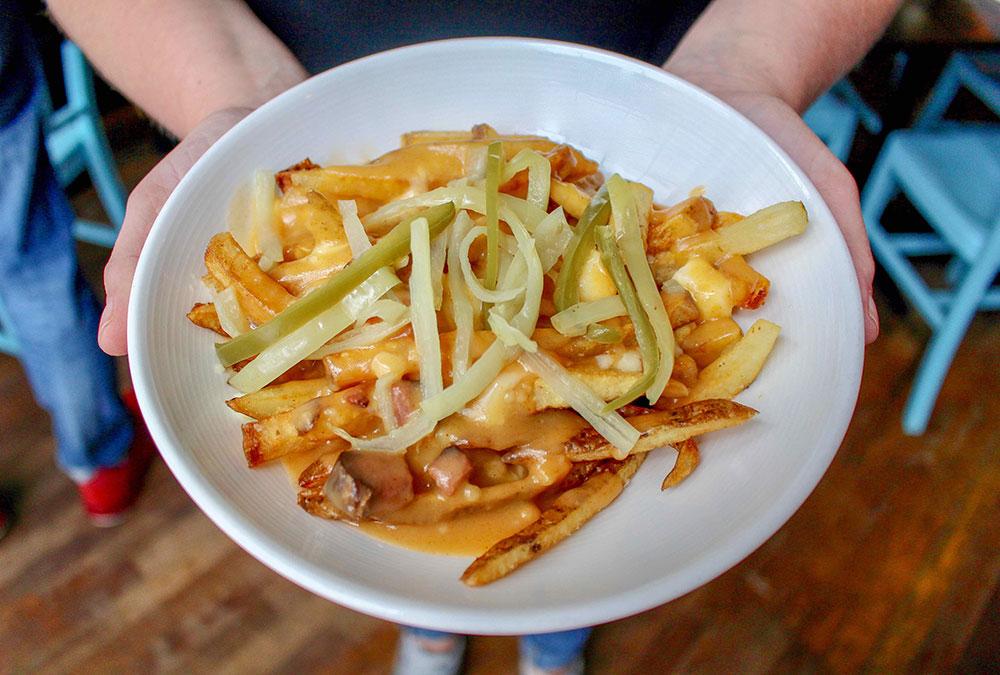 The Canadian culinary indulgence, poutine – French fries bathed in gravy and covered with cheese curds – gets a Midwestern morning makeover at Bite CafÃ© in Chicago, IL. At the airy eatery, the Breakfast Poutine has all the expected ingredients, but it’s topped with pickled chiles for a sour tang to cut through the richness and poached eggs. If you’re leaning towards something sweet, try the French Toast – it’s paired with lavender blueberries and orange curd. 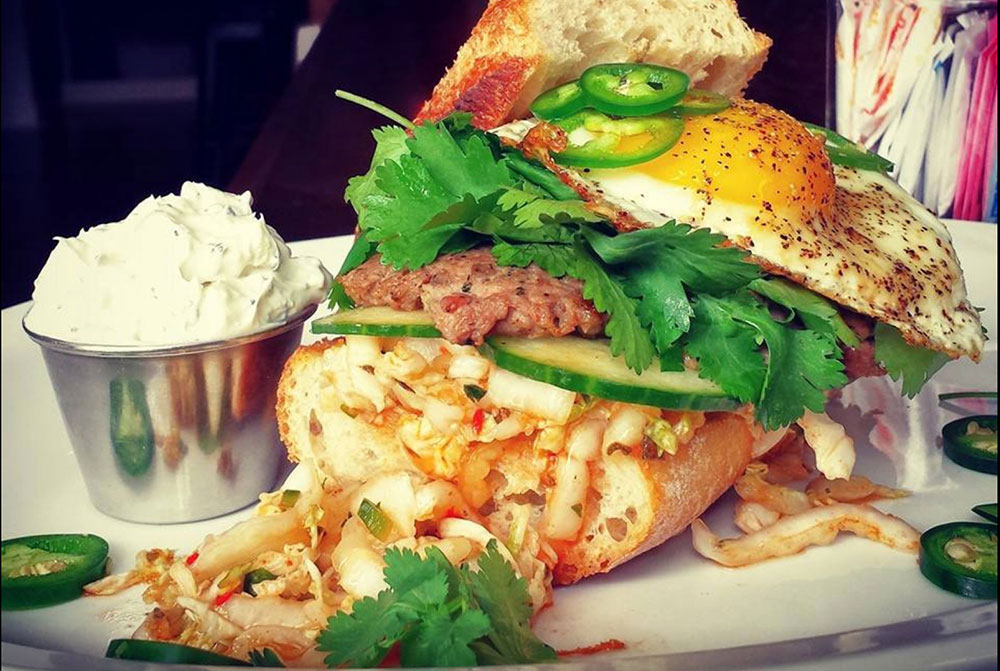 Tucked in an unassuming building in the trendy Ohio City section of Cleveland, OH, Jack Flaps’ vibe might be low-key, but the food is anything but. Locals rave about the Breakfast BÃ¡hn MÃ¬ – the Vietnamese sandwich reinvented for breakfast. The French baguette is filled with Vietnamese sausage and kimchi, along with slices of cucumber and jalapeÃ±o held in place with everything bagel cream cheese all topped with a fried egg. Looking for a morning meal on the sweeter side? Go for the tiramisu pancakes. 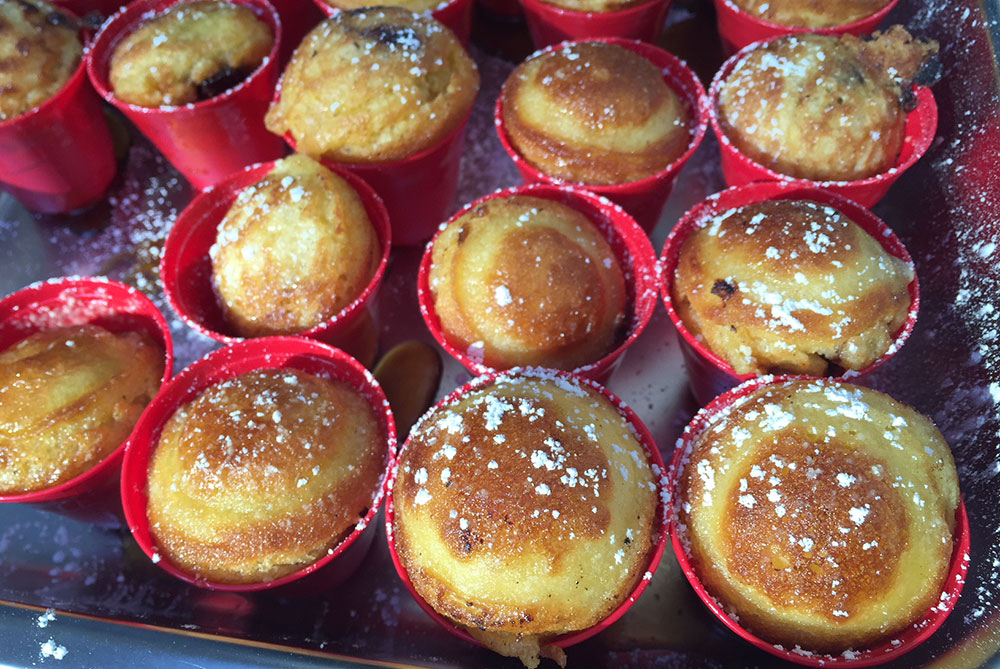 With an almost crepe-like consistency, the Pancake Balls at Katalina’s in Columbus, OH, are filled with your choice of dulce de leche, pumpkin-apple butter or Nutella (I’d go for Nutella every time!). The plate of pancake balls comes with aged maple syrup and a house favorite (and secret recipe) – sweet ‘n’ spicy bacon, or regular. 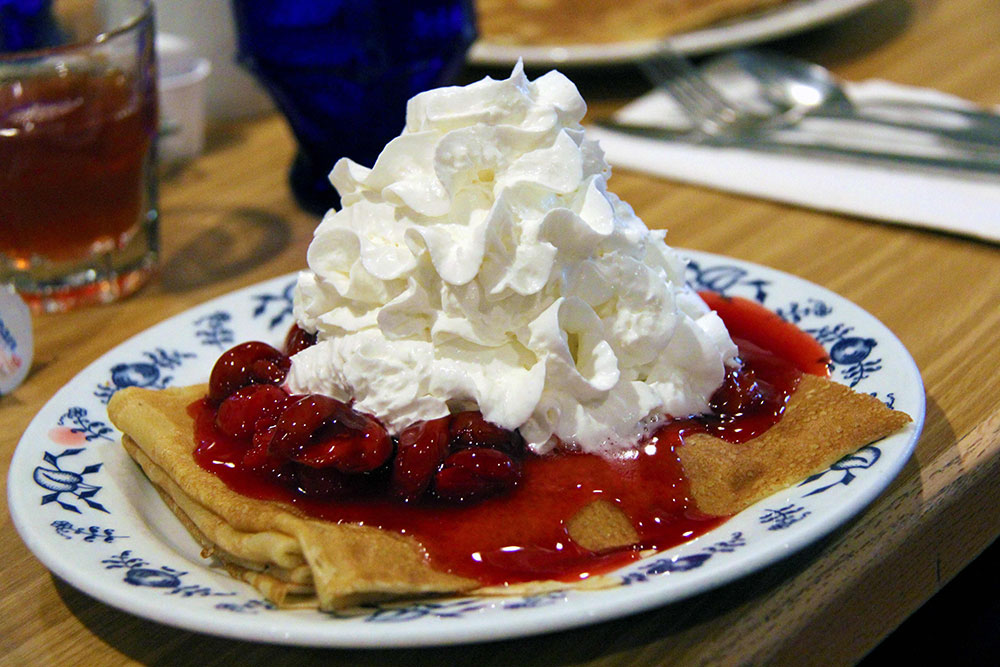 Perched along a sliver of Lake Michigan that fingers into Door County, WI, Al Johnson’s Swedish Restaurant & Butik offers both traditional American and Swedish staples. The Swedish Pancakes are more like rectangular-shaped crepes, folded over and topped with cream and berries. Another old-world dish is the Pytt I Panna – or Swedish roast beef hash alongside an egg and pickled beets. 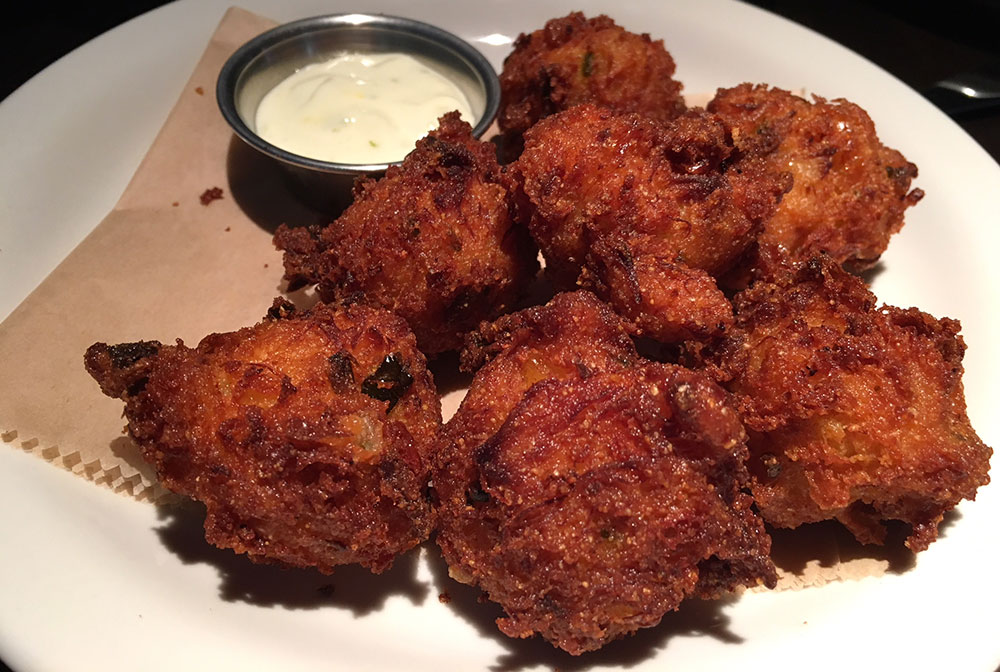 6. Croissant Cinnamon Rolls in Indianapolis, IN

You’ll forget all about the New York City-born, croissant-donut hybrid known as the cronut when you take your first bite of the Croissant Cinnamon Rolls on the breakfast menu at Conner’s Kitchen + Bar, a just-opened restaurant in downtown Indianapolis, IN. The buttery, flaky dough is swirled with cinnamon and rolled into a softball-sized roll that they lightly toast before delivering to your table topped with a cloud of cream cheese frosting. Make sure to order a helping or two of the Lump Crab Hushpuppies to the side – the fried nuggets, filled with chunks of crab, come with a citrus sauce that cuts the spiciness of the diced jalapeÃ±o tucked into each bite-sized piece. 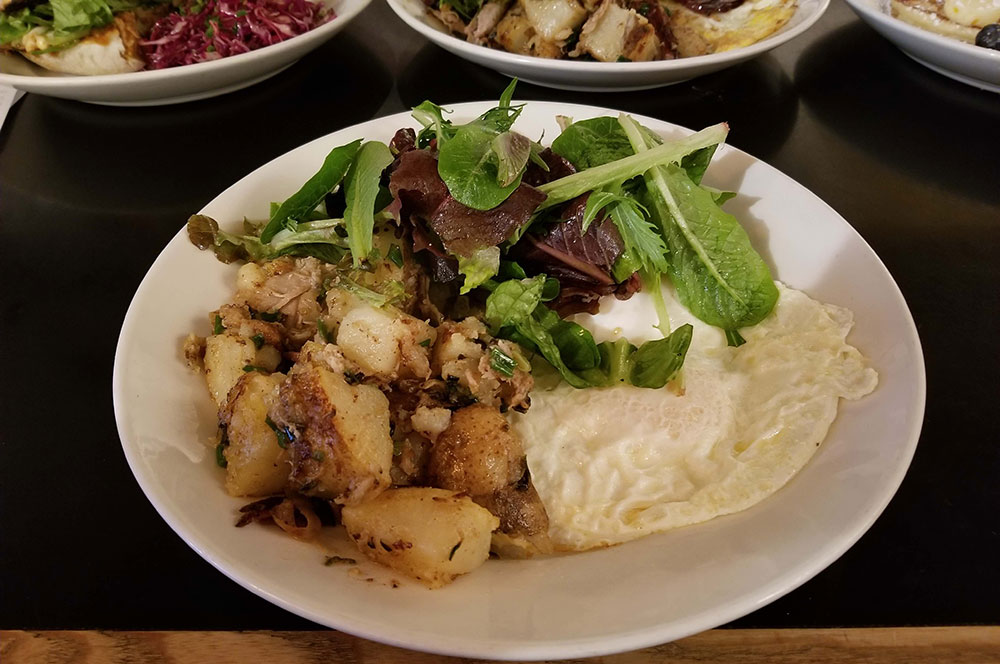 Upscale meets down-home in this reimagined brunch staple – hash made with duck. One of the signature dishes at Marigold Kitchen in capital city Madison, WI, it’s paired with eggs and topped with caramelized onions and fresh herbs. If you’re going meat-free opt for the Roasted Sweet Potato, Kale and Basil Walnut Pesto Hash instead. Restaurant regulars might point you to the pancakes – try the Citrus Ricotta Buckwheat with orange almond butter to the side.

Yes, it’s really called a mess, a type of breakfast concoction that includes a mix of ingredients. At Salt Fork Kitchen, started by farmers looking to share their crops from soil to table, in Solon, IA, their signature mess is the Zayna. Loaded with lamb sausage, rice, peppers and a drizzling of Balsamic vinegar, it’s finished off with a dollop of tangy yogurt and poached eggs. Other breakfast staples, like pancakes and omelets dot the menu, but make sure to order some of the from-scratch sides like flaky biscuits (they’re square) and home fries. 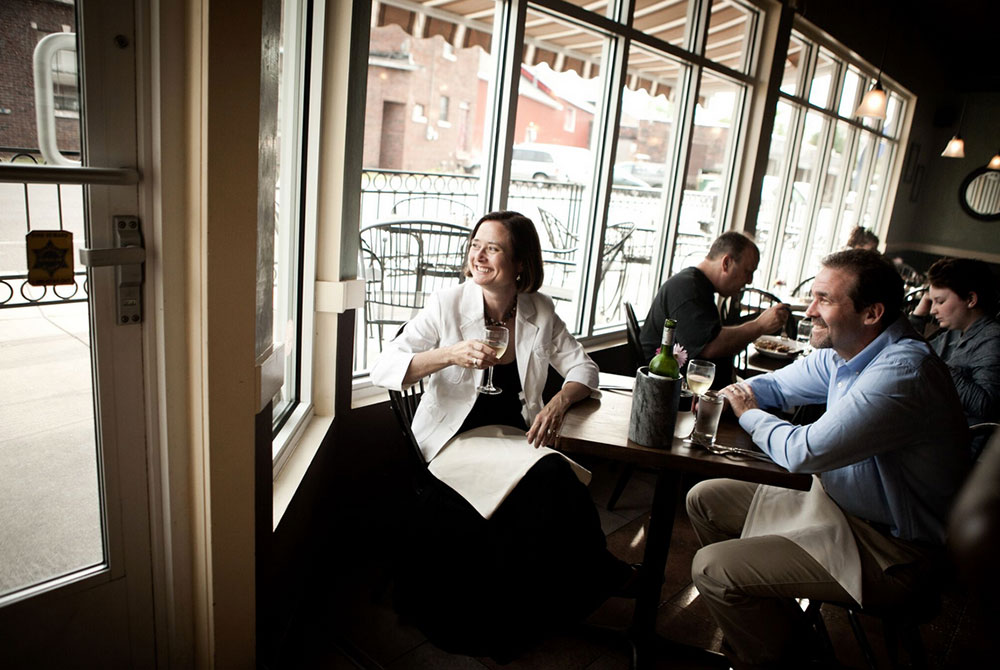 Bistro fare for brunch? Mix in French cuisine sensibility and a cozy lakeside town and you’ve got PÃ¢tisserie Amie in Traverse City, MI. Take your pick from the long list of omelets, like the vegetable and gruyÃ¨re-cheese infused Omelette Ratatouille. Locals may steer you toward the savory crepes, but you might also want to consider a serving of Pets de Nonne (French beignets) doused in powdered sugar.