It's a big question. Here's what you need to know. 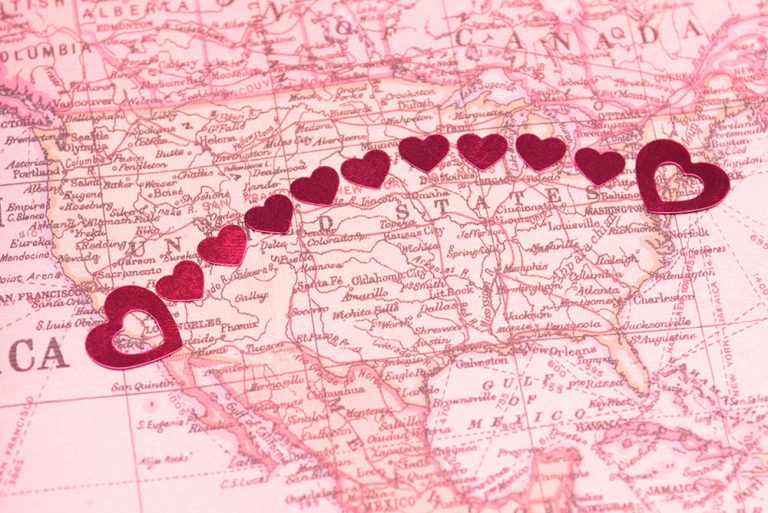 Long-distance relationships are nothing new. For as long as humans have gone off to war or travelled in search of food, couples have maintained romance across great distances. According to the Center for the Study of Long Distance Relationships, almost three percent of married couples live apart for reasons other than marital strife, and up to 40 percent of college students say they’ve dated across distance.

What’s changed is that while long-distance relationships were once conventional relationships enduring an interruption in proximity, today, it’s not uncommon to start a relationship with someone in another time zone. Many couples meet online and often live in other states, dating virtually until they decide to take things to another level. Plus, as long distance relationship expert Dr. Gregory Guldner has explained, it’s increasingly common for people to travel for work–and meet their future mates on the road.

“People travel for their work, they commute farther, they generally travel more than we did just a few decades ago. All of these things make it more likely that they’ll fall for someone who doesn’t live nearby,â€ says Guldner, author of Long Distance Relationships: The Complete Guide.

That’s exactly how Eric Fromhart, 31, met his now-wife Angela Cody, 28. Eric was staying in Boston to avoid having to fly back to Portland, OR, between East Coast business trips when he happened upon Angela at a restaurant across the street from his hotel.

“I had to be in remote northern Maine for work and the only flight to get up there was through Boston. I had never been to Boston before but I had two friends that had just recently moved to Boston so I let them know I would be in town,â€ Eric recalls. “Angela happened to be hosting her friends from Maine, a couple, and were just getting early dinner and drinks at the Red Lantern as well.”

The two struck up a conversation and, before Angela left with her friends, Eric found the nerve to get her number. His bold move paid off, and the two spent the next day together. By the time he returned to Portland he was already thinking about ways to move to Boston.

“I told all my friends and family about this girl I met on my work trip through Boston,â€ Eric explains. “We continued chatting on the phone and Skype and I would flirtatiously and half-jokingly throw out the question, ‘Do you think we would date if I lived in Boston?’ She answered “yesâ€ to that question, so that’s when I seriously started thinking about making it happen.”

There’s no better recipe for disaster than moving into someone’s love nest and being financially dependent on them.

Jennifer Hornstein Beatty, 40, can relate. Two years ago, she was living in Bend, Oregon, hoping to meet her “forever man.â€ So she was initially resistant when a friend recommended she download Tinder, a dating app she assumed was for people who wanted “hookups,â€ not seriously relationships.

Eventually, she relented. Before long, she connected with Oliver Beatty, then a 32-year-old lawyer from Missouri in the area for business who had also recently downloaded the dating app.

“Randomly the app aligned us together since for just a few days we were within a 50-mile radius,â€ Jennifer explains. “He had never been to Oregon or the Pacific Northwest and I had never been to Missouri or the Midwest. For reasons only fate can understand we popped up on that app randomly that week and we both ‘swiped right.’â€

Planning a Long Distance Move: Tips for Moving to a New State

They never did meet in person during Oliver’s work trip, but that initial connection sparked an “18th Century-styleâ€ courtship that unfolded via emails, text messages, and phone calls over the next three months.

“After three months, Oliver flew to see me as we both realized we had to meet,â€ Jennifer recalls. “Luckily everything went even better than expected. I think getting to know someone first without the physical can make your relationship stronger. At least in our case.”

Both couples found an instant connection and, before long, were faced with a difficult decision. For Jennifer, that call came just six months after she an Oliver both swiped right. While visiting him in St. Louis, Oliver proposed to her in front of the statute of King Louis the XIII and reflection waters of Forest Park. She said yes.

For Eric, moving to Boston came somewhere between love and marriage. Even without the promise of a life together, he took the leap and moved to Boston in June of 2012–which just happened to be Angela’s birthday. The couple got engaged in 2014 and just married last October.

These Are the 10 Best Affordable Honeymoon Spots in the US

So how did these two couples with similar points of origin, but slightly different paths, ultimately make the difficult decision to upend their lives for love?

Jennifer says that the after the proposal, she and Oliver knew they couldn’t keep doing the long-distance thing, and so they began planning for the future.

“We talked thoroughly about how we could make it work but in the end one of us would have to move,â€ she explains. “It came down to our jobs.”

They each had roots in their respective cities, with jobs and friends they loved. But while Jennifer could work virtually anywhere as a graphic designer, Oliver was a lawyer and could only work in states where he had passed the bar exam–Missouri and Illinois. So Jennifer took the leap.

“That summer I sold my house, purged about 70 percent of my possessions and moved my dog and myself to Missouri,â€ she recalls. “It was a grand gesture to match his proposal to marry me. He promised to do everything he could to get us back to the Pacific Northwest.”

Emmy-nominated relationship expert Dr. Wendy Walsh, who appeared in a Dr. Phil spin-off called “The Doctors” and is a frequent expert guest on the national morning shows, says jobs are often deciding factor in which person in the relationship moves.

“In today’s culture, you follow the money, whoever’s making the most money,â€ she explains. While that often means following the person with the higher-paying job, the partner with a more established career may also be employable in more places.

But even if one partner makes enough to support the other completely, Dr. Wendy cautions against making a big move without a job lined up, especially when moving for a relationship.

“There’s no better recipe for disaster than moving into someone’s love nest and being financially dependent on them,â€ she says.

While both Jennifer and Eric made sure their moves didn’t jeopardize their ability to work, they each skipped some steps Dr. Walsh says are important when considering moving for a relationship. Namely, spending enough meaningful time together to help ensure the relationships longevity.

“They should have been together for at least a year. You don’t want to uproot your life for someone you’re in lust with,â€ Dr. Wendy says. “That lists at least 6 months, and can last longer.”

She recommends long-distance couples contemplating making the big move spend some consecutive time with each other, at least a couple weeks, to get a more realistic sense of what it would be like to live together fulltime.

While Eric took his chances early in his relationship, he also had sufficient job and social connections to minimize the risk.

“Honestly, my only goal was to get there and be together with her. I had no plan for what I was going to do afterward, how long I would stay there, etc.,â€ Eric recalls. “Luckily, my two friends from Oregon that lived in Boston already were working on me simultaneously, encouraging me to move and that we would get an apartment in the city and how fun it would be.”

Love Advice From the Valentine Stampers of Loveland, CO

Dr. Wendy says these friendships are crucial to the success of newly-close relationships. Too often, the person who moves ends up leaning heavily on their partner for social connections, which can put a strain on the relationship.

“They tend to be people who are not impulsive, people who have good conflict resolution skills, and are able to communicate openly and honestly,â€ she says.

Today, both couples are married and living in entirely new cities. Jennifer and Oliver are slowly making their way back to the Pacific Northwest, and now live in North Dakota where Oliver works for a Native American tribe. Eric and Angela have since moved to Philadelphia.

Still, moving to be with a long-distance partner takes a leap of faith, and confidence goes a long way.

“We’re still very happy and in love without an ounce of regret,â€ Jennifer says. “Taking the leap for love was well worth it.”