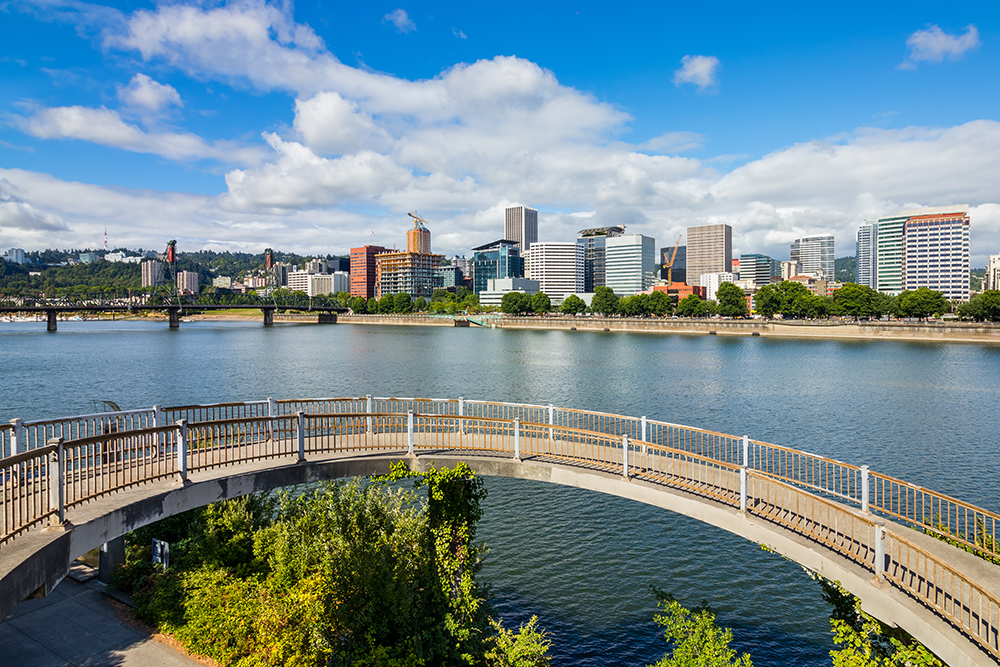 Many US cities deserve accolades for their ecological efforts in recent years. Here we look at a few that we think are particularly interesting. Whether it’s a focus on parks, water, housing, or farmers’ markets, these cities all serve as examples of what we can achieve when we decide to put the Earth first. As everyone’s definition of what constitutes sustainability is a little different, the locales below are listed in no particular order. So instead, think of this as just a few examples of places doing some pretty cool things to try to save the planet.

Portland, OR, often pops up on lists of greenest cities, and for good reason, it tics quite a few of the boxes that people look for when it comes to sustainability. From its impressive public transportation and a plethora of farmers’ markets to restaurants with locally sourced ingredients and enough thrift stores to keep Macklemore happy for a year, Portland is something of a mecca for the environmentally conscious. In fact, more people bike to work in the Rose City than anywhere else in the country, with over 7% of all commuters putting the pedal to the bike path. And speaking of bike paths, they don’t skimp there either.

Along with these tried-and-true sustainability efforts, Portland is often on the leading edge of more innovative ideas as well. For instance, in 2018, Oregon became the first state to legalize the use of cross-laminated timber. Also called CLT or “mass timber,” it allows the state to develop mid-rise and high-rise construction of all-wood buildings. The effort came through a realization that housing, while often treated as a separate issue from sustainability, is actually a vital factor. Similar forward-thinking led to the repeal of a 97-year-old law that banned seven different greener housing types. And Portland isn’t just some up-and-comer in their efforts to make the world a little more eco-friendly; you can look back to 1974 when they removed a 6-lane highway to put in a park. Guess it’s no surprise then that The Trust for Public Land puts them in their top 10 for their park system!

Another pair of cities that have taken to heart the importance of housing in the climate fight are Minneapolis and St. Paul, MN. In 2019, The Twin Cities made the groundbreaking decision to ban single-family zoning. The local fed has even developed a new digital tool to measure the zoning reforms’ impact on housing in the city. But, of course, this isn’t the only area where these neighboring cities are national leaders; that same Trust for Public Land that ranked Portland so highly has Minneapolis as number 3, with 98% of city residents living within a 10-minute walk to a park. And other studies have shown that St. Paul ranks as one of the least wasteful cities in the country per capita and has some of the shortest commutes. That’s a powerful one-two punch of sustainable living.

Now — jumping back to the west coast — the waaaaay west coast. Honolulu, HI, makes this list due to its eco-conscious population and its above-average number of energy-efficient commercial buildings. In fact, Honolulu has the highest number of solar cells installed per person of anywhere in the country. Due to the nature of being built on a volcanic island, they also have an abundance of parks and greenspace and a population dedicated to keeping it that way. Not that we’d expect any less from a place that some very smart people ranked as one of the top 10 healthiest cities in the country. Maybe that has something to do with Honolulu having more year-round farmers’ markets than any other US city? As if that all wasn’t enough, more than 30% of Honolulu residents don’t even own a car, an impressive number for a city that doesn’t score particularly well for walkability. But hey, what’s an extra couple miles on foot when it’s always 80 degrees out?

While lists of greenest cities are often heavily skewed to the west, there’s no denying that Washington, DC deserves a spot. DC is in the top 2% nationally for LEED-certified buildings, for starters. The League of American Bicyclists calls it the most bikeable city in the US, which is probably why it ranks among the bottom in the number of commuters who drive to work. The city even helped popularize the bike-share trend. And when it comes to farmers’ markets? Forget about it; Washington, DC has the most per person in the country. Bike paths and open-air markets fit in nicely with DC’s use of green space, with The Trust for Public Land giving them the number one ranking in their 2021 ParkScore. Unlike many cities, access to parks isn’t limited to affluent or gentrified neighborhoods either. DC has 55% more access to parks in neighborhoods of color than the national median and 50% more in low-income neighborhoods.

Only a few cities score a perfect five on the STAR Community Rating System, and Seattle, WA, has long been recognized as one of the most sustainable cities in the United States. Annually ranked as one of the top recyclers around, Washington’s statewide bag ban is one of the toughest in the country; not only do they not allow exceptions for restaurants, but repeat offenders face a $250 fine. Seattle is also pretty serious about building sustainably, with over 1,000 buildings carrying some form of eco-certification. For example, the Bullitt Center is touted as being “the greenest commercial building in the world.” And in 2005, the city-owned energy company City Light became the first electric utility provider in the country to be totally carbon neutral. There is also a growing movement in Seattle to source restaurant ingredients from local sources, and new farmers’ markets are popping up all the time. Finally, it will be no surprise that Seattle is often called The Emerald City because its ParkScore was ranked number nine last year.

When you think of a sprawling city set down in the middle of a barren desert, whose sole purpose seems to be unlimited entertainment, you’d be forgiven for not thinking of it as ‘green.’ More beige and neon, maybe.

And while it’s true that Las Vegas, NV hasn’t yet reached the echelons of sustainability that some other places on this list have, they’ve made serious strides in recent years. Foremost of these efforts, unsurprisingly, is their water reclamation project. While evaporation is inevitable in a climate like that of Las Vegas, the city has aimed to reclaim, filter and reuse as much water as possible, an effort that has resulted in nearly 40% of the cities water now being saved. Both individuals and businesses are incentivized to save water and punished when they don’t; they’ve even employed water cops to make sure ordinances are enforced.

Las Vegas also built a novel solar park entitled Crescent Dunes, designed to store heat in molten sand so that it can distribute energy 24 hours a day. While the project ran into some significant issues, including the bankruptcy of its company, it started running again in 2021. The city as a whole achieved a LEED gold certification in 2020. While they still have a long way to go to be a national eco-leader, they are certainly moving in the right direction. If Las Vegas can go green, anywhere can.

Other Cities with Interesting Sustainability Projects

These cities are a little smaller — they may fly under the radar, but that doesn’t make them any less deserving of recognition. So for these, we’ll look at a single program or project they’ve undertaken to make, in some cases, a pretty radical change for the better.

You won’t see Ithaca, NY pop up on many “Best Of” lists for eco-friendly-ness, but it absolutely should. That’s because, in 2021, Ithaca became the first city in the US to vote to decarbonize itself. That means that they’ve begun the process, with the help of $100 million in private funding, to decarbonize every single building in the city. In a city where nearly half its current structures were erected before 1940, that will mean significant reductions in its carbon emissions.

While environmentally friendly policies and left-leaning city leaders can go hand-in-hand, that isn’t always the case. Take a look at Georgetown, TX, for example. The city made a switch to fully renewable energy sources to save money. Now, while that strategy hasn’t entirely gone to plan so far, there is still much to be learned about how anywhere can make the change, at least with some careful planning.

Like Burlington, VT, for example! While they did go full-renewable for their energy for the environmental impact, it’s worked out pretty well for them financially, too. In fact, they haven’t raised rates in eight years. They use a balanced mix of hydro, solar, wind, and even biomass to power their city of over 40,000, and they’re not stopping there; Burlington is currently working on ways to become fully zero-carbon. We’ve heard it’s not a bad place to live, either.

Aspen, CO’s bid to become energy-independent began in 1885, only six years after it was established as a mining town. At the time, words like “green” and “sustainable” had very different connotations, but they still installed the first source of hydroelectric power in the western US. And following the unwitting steps of their ancestors, they were able to switch their city-run utility company to fully renewable sources in 2015. They still use hydroelectric power and combine that with wind energy to achieve energy independence.

Question: What happens when a small team of researchers from a rural town of fewer than 3,000 people travels to Utah for a weekend boot camp in clean energy innovation?

Answer: You end up with Bloomfield, IA, on a path to become energy-independent by 2030. Not only have they figured out plans to capitalize on already-existing energy sources, such as methane from the area’s many hog lots, but they plan on using the project to supply jobs in a town that many felt wasn’t going to make it. But, of course, even a small town needs more energy than they can pull from existing infrastructure, which is why many of Bloomfield’s businesses are now using Iowa’s solar tax credits. The project, which could bring an estimated influx of $35 million in new investment and a whole slew of new jobs, is a massive boon to Bloomfield. But even more importantly, it shows that any city, of any size, can be the next to take a giant leap into a more sustainable future.

It's the kind of place where everybody knows your name.