Skip to content
Home > Make Your Move > The Moving Diaries: Transitioning From a Big City to a Small City

I moved from the biggest city in the country to a small city in the South. Here's what I love, what I learned, and what I miss. 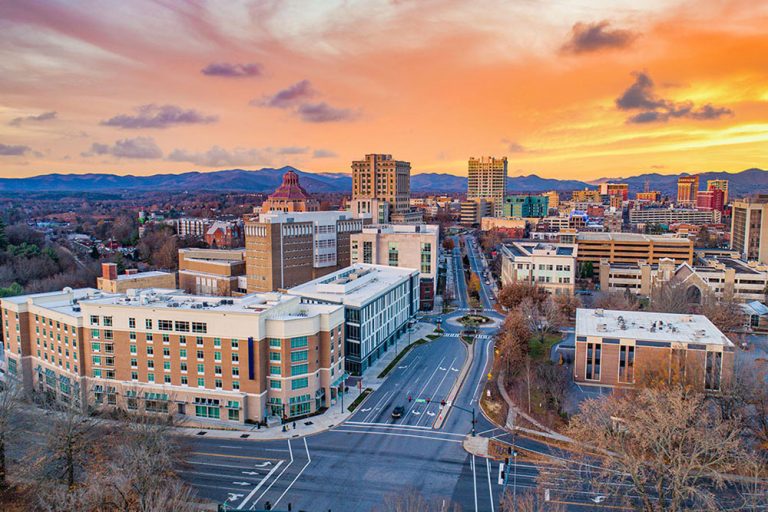 I knew that I wanted to move out of New York City long before I knew where I wanted to move. This city mouse had no qualms about becoming a country mouse, or a suburban mouse, or even an island-with-100-people-on-it mouse. After living for the better part of the last 19 years in a metropolis of over eight million people, I just wanted to experience something new.

The population of Asheville, where I moved in October 2020, is around 90,000 people. I guess you could say I’m a small-city mouse or a big-town mouse now. Instead of living in the country’s largest city, my new home doesn’t even crack the top 10 largest cities in North Carolina. Asheville’s vibe is the opposite of the relentless intensity of New York City; everything moves at a slower pace.

The most striking change for me between big-city and small-city living has been the impact on my mental health. I have had anxiety and depression since I was 14 years old. Although I have panic attacks mostly under control at this point in my life, I often feel overwhelmed, lonely and anxious. While I lived in New York City, I assumed those were intrinsic personality traits; I used to think of myself as “a sad personâ€ and that that was just the way I am. And then, almost immediately upon moving to Western North Carolina, my general mood improved. I felt less sad, anxious and angry on a day-to-day basis – so much so that I didn’t even realize just how bad I had felt before.

I could chalk the change of mood up to the calming effect of watching the sunset over the mountains (and more visible stars!). That’s part of it, I’m sure, but my standard of living greatly improved after leaving Brooklyn. My former apartment – and every other apartment I’d had in New York City before that – was small, with little natural sunlight and a lot of noise pollution. I bought a light therapy lamp (aka a “happy lampâ€) a couple of years ago, but it served as a very small Band-Aid. The sound of firetrucks across the street from our old apartment, music from the church next door, and people constantly talking on the sidewalk outside our windows made me miserable by the time we moved out.

In Asheville, it’s quieter both inside and outside my apartment, and wide-open spaces and hiking trails are never far away. To be honest, I don’t even remember what box I packed the light therapy lamp in because I haven’t needed to use it. An incredible amount of natural sunlight streams into our apartment and we have a private outdoor space, too. When I hear sirens or children shouting as they play outside, it’s off in the distance – not directly outside my window.

What I have struggled to adjust to is the diminished public transportation here compared with New York City. During the first few weeks that I lived in Asheville, I felt really panicky about how “stuckâ€ I was in my neighborhood without access to great public transit. There is a bus system in Asheville, but it’s primarily a car culture here. Since there are a lot of places in Asheville that aren’t accessible by walking or the bus, we’re reliant on our car to get places. I walk much less frequently, and when I do, oftentimes there aren’t sidewalks. The cleanest and best-maintained sidewalks are in Asheville’s main downtown area, but in the rest of the city, they are nonexistent or poorly maintained. For the first time in my life, I’m experiencing what it’s like to live in a place that doesn’t feel “walkable.”

Shopping has been an adjustment, too. In Brooklyn I was able to walk to – no exaggeration – at least eight different grocery stores within 15 minutes of my apartment. Now we “drive into townâ€ to get groceries. I have to make sure the shopping list is perfect because I can’t walk half a block to a grocery store to get ingredients if I forget the green onions. I realize that most people in the country are used to living this way. But I had grown used to being able to dash to a neighborhood shop and buy whatever I needed – Wrapping paper! A salmon fillet! A book of poetry! – at a moment’s notice.

Conversely, living in a small city also means I can revel in the underrated pleasure and convenience of having big box stores and a car. When I lived in New York City, part of the reason I loved visiting my family in the Connecticut suburbs was because I could hit up a Target, Marshalls or TJ Maxx. Those stores were in New York City, too, of course. But the available products were always really picked over, and it was difficult, if not impossible, to bring lots of bags of groceries or larger items like furniture home on the subway. On the day that my husband and I moved to Asheville, it was extremely satisfying to do a Target run and not have to lug heavy bags around! (Of course, Asheville has a robust small business community as well. My favorite places so far are the bookshop Malaprops and the clothing store Nest Boutique + DIY Studio.)

Truthfully, the pandemic has meant that I haven’t gotten to explore my new city fully. When we made the decision in October 2019 to move to Asheville, I had a list of bars, restaurants and museums that I was excited about visiting. After three months living in Asheville, I’ve only been to a few bars and only because they had outdoor seating. My husband and I are staying at home for our safety and everyone else’s. Even though it’s the right thing to do for public health, it’s frustrating on a personal level to have a new place right at our fingertips, but not be able to experience it.

I’ll tell you one thing I know for sure: When this pandemic ends, I’m so excited to be able to really explore Asheville and experience all the big things this small city has to offer.